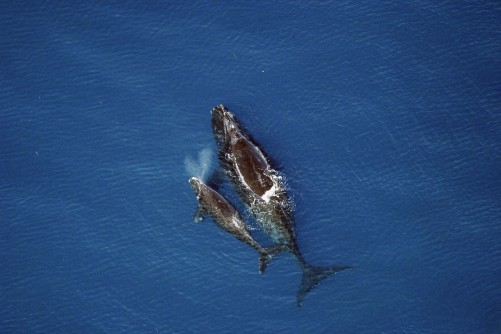 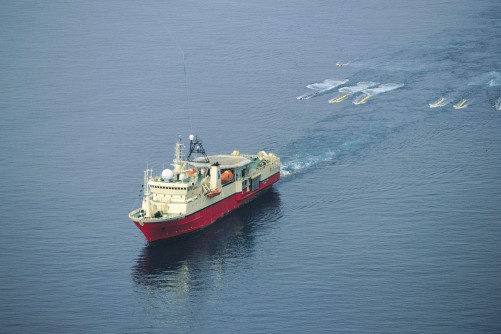 A ship towing an array of seismic airguns.

Newswise — A series of seismic surveys for oil and gas planned for the mid- and southeastern Atlantic coastal areas of the United States pose a substantial threat to one of the world’s most endangered whale species, according to a group of renowned marine mammal scientists urging a halt to the surveys in a statement released today.

In an open letter sent to President Obama, the 27 leading right whale experts—including scientists from Cornell Lab of Ornithology, New England Aquarium, the Wildlife Conservation Society, Duke University, and Woods Hole Oceanographic Institution—stated that seismic oil and gas surveys planned in the waters between Delaware and Florida would significantly impact the acoustically sensitive North Atlantic right whale, an endangered species numbering no more than 500 animals, and “would jeopardize its survival.”

Last month, the administration excluded oil and gas leases in the same regions for the next five years, but the controversial seismic surveys may continue as planned.

The statement says that the surveys would introduce a significant amount of noise pollution into the marine environment most critical for the survival of the North Atlantic right whale, an animal that gives birth and nurses in the relatively warm coastal waters from North Carolina to Florida. The cacophony produced by the airguns is likely to disrupt the whales’ vital behavior, with the resulting stress causing negative impacts on the health of individual animals.

“The airguns used for seismic oil and gas surveys produce intense explosions every 9 to 11 seconds for many weeks or months at a time. All of this is undetectable to someone at the surface, but the underwater impact and disturbance from these activities can be devastating to ocean life, especially for species such as the North Atlantic right whale,” said Dr. Christopher Clark, Senior Scientist for the Cornell Lab of Ornithology Bioacoustics Research Program.

The proposed seismic surveys will use arrays of airguns towed behind ships as they explore for oil and gas deposits beneath the ocean floor. The blasts of sound produced by the guns penetrates the seafloor, and the returning echo reveals the presence of potential fossil fuel deposits. These extremely intense explosions are harmful to marine life, and whales are known to avoid or abandon survey areas. Companies have applied to survey as much as 90,000 miles of trackline off the East Coast, running back and forth over the same area during the first year alone.

“The North Atlantic right whale is protected by US, Canadian, and international laws, and over the last three decades, we’ve seen slow growth in the population.” said Dr. Scott Kraus, Vice President of Research for the New England Aquarium and head of a long-running science program on the species. “However, this growth has been lower than expected, and the latest data indicate a recent population decline. Threats such as fishing gear entanglement, existing noise pollution and other factors continue to impede the right whale’s recovery. Seismic surveys could interfere with communication, elevate chronic stress, and will disproportionally affect the most vulnerable members of the population, mothers and calves. Seismic exploration in the Atlantic will make this whale’s situation even worse.”

“The North Atlantic right whale has managed to survive centuries of past whaling, and a host of recent threats such as ship strikes, fishing gear entanglement, and chronic noise from a range of human-generated sources,” said Dr. Howard Rosenbaum, Director of the Wildlife Conservation Society’s Ocean Giants Program. “Even with the proposal for oil and gas drilling off the table, potential impacts from seismic surveys are still of great concern, especially given the endangered status of these whales and the threats they already face.”

The North Atlantic right whale relies heavily on a fundamental behavior: the ability of whales to communicate with one another using sound,” said Dr. Doug Nowacek, Repass-Rodgers Chair of Marine Conservation Technology at Duke University. “The noise generated by seismic airguns, particularly along the urbanized US east coast, could jeopardize critical communications, such as vocally mediated mother-calf contact."

Growing to nearly 60 feet in length, the North Atlantic right whale was one of the first targets of the world’s commercial whaling industry and was rapidly wiped out from the animal’s coastal habitats in the Atlantic before whalers moved onto other species. The species is designated as “Critically Endangered” on the IUCN’s Red List of Threatened Species, and is protected in U.S. waters by the Endangered Species Act and the Marine Mammal Protection Act.

The Cornell Lab of Ornithology is a membership institution dedicated to interpreting and conserving the earth’s biological diversity through research, education, and citizen science focused on birds. Visit the Cornell Lab’s website at http://www.birds.cornell.edu.

The New England Aquarium seeks to be a catalyst for global change through public engagement, commitment to marine animal conservation, leadership in education, innovative scientific research and effective advocacy for vital and vibrant oceans. The Aquarium is the only Boston-based cultural institution with a mission focused primarily on the environment, promoting the importance of protecting the blue planet through innovative exhibits and educational programs.

WCS (Wildlife Conservation Society)MISSION: WCS saves wildlife and wild places worldwide through science, conservation action, education, and inspiring people to value nature. To achieve our mission, WCS, based at the Bronx Zoo, harnesses the power of its Global Conservation Program in nearly 60 nations and in all the world’s oceans and its five wildlife parks in New York City, visited by 4 million people annually. WCS combines its expertise in the field, zoos, and aquarium to achieve its conservation mission. Visit: www.newsroom.wcs.org Follow: @WCSNewsroom. For more information: 347-840-1242.

Duke University’s Nicholas School of the Environment (www.nicholas.duke.edu) works to advance a more sustainable future through strategic research and outreach and by training a new generation of global environmental leaders. 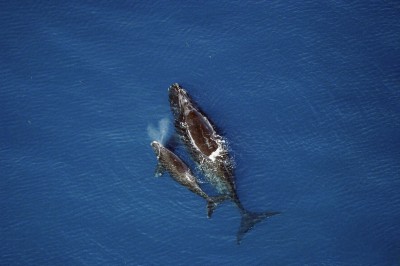 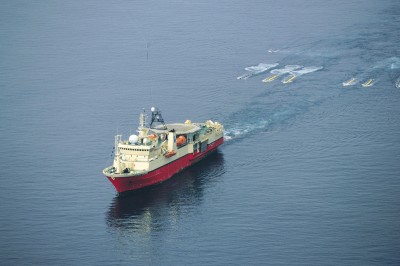 Caption: A ship towing an array of seismic airguns.