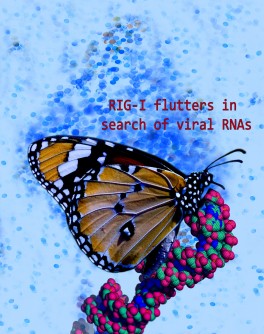 Newswise — Piscataway, NJ – Researchers at Rutgers Robert Wood Johnson Medical School have identified an important step in the process that allows our bodies to fight viruses. Their work also explains how mutations that derail this process cause autoimmune disorders. This research, published today in Molecular Cell, provides the framework to develop new treatments for viral infections.

For a virus to spread and cause an infection, it replicates itself inside of a host cell, the process of which generates viral nucleic acids such as DNA and RNA. However, our immune system has elaborate mechanisms in place to defend against both common viruses, such as influenza, and emerging viruses. The Rutgers team studied the process in which an immune receptor called RIG-I, which was discovered more than a decade ago to be a key player in the battle against RNA viruses, patrols the body in search of viral RNAs. Once the immune receptor discovers a viral RNA, it ends its search and activates the cell’s antiviral response.

The study’s author, Swapnil C. Devarkar, PhD, likened the process to a butterfly, “The continuous cycle of association and dissociation of RIG-I with RNAs is reminiscent of a butterfly. As a butterfly is constantly fluttering to and from anything that resembles a flower, similarly RIG-I is constantly sampling RNAs in the cell in search of a viral RNA.” Dr. Devarkar is a post-doctoral fellow in the laboratory of Smita Patel, PhD, professor of biochemistry and molecular biology at the medical school.

When RIG-I discovers a viral RNA, not only does the fluttering stop, but it also signals for multiple molecules of RIG-I to gather on the viral RNA, activating the cell’s antiviral response. The study has identified this as a critical step because it can only occur in the presence of viral RNAs.

In addition to this finding, the research team learned that RIG-I mutations previously linked with the autoimmune disorder Singleton-Merton syndrome cause defects in the process that normally allows RIG-I to flutter away, or disassociate, from RNAs  that do not contain viral signatures. When this occurs, according to the study, mutated versions of RIG-I become trapped in stable and long-lived complexes with cellular RNAs that eventually trigger abnormal immune responses.

According to Dr. Devarkar, given the importance of RIG-I in viral infections, autoimmune diseases, and cancer immunotherapy, the findings presented in this study can be used to leverage RIG-I in antiviral and cancer therapies.

The work was a team effort between Dr. Patel’s laboratory in the Department of Biochemistry and Molecular Biology at Robert Wood Johnson Medical School and Joseph Marcotrigiano, PhD, from the Laboratory of Infectious Diseases, National Institute of Allergy and Infectious Diseases, National Institutes of Health, Bethesda, Md. Dr. Devarkar was assisted by graduate student Brandon Schweibenz and Chen Wang, PhD. The research was supported by NIH grants GM111959 to Dr. Patel and Dr. Marcotrigiano, and GM118086 to Dr. Patel; and the Intramural Research Program of NIAID and NIH to Dr. Wang and Dr. Marcotrigiano.