Said the Tumor to Its Neighbor, “You’ve Got Mail”

Building a clearer picture of precisely how tumor-derived exosomes drive the malignant transformation of nearby normal cells. 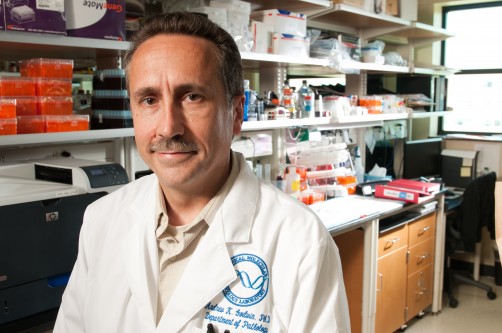 Newswise — Cells have their own miniaturized postal service in the shape of vesicles, or tiny bubbles through which molecules crucial for biological processes like communication and food intake are sorted, packaged and delivered. Aside from the 2013 Nobel Prize in Medicine going to the discoverers of this highly organized transport system, scientific interest in a particular group of vesicles called exosomes has accelerated over the last several years. Andrew K. Godwin, Ph.D., professor and director of molecular oncology at the University of Kansas Medical Center, is among the researchers studying the potential clinical applications of these specialized structures.

Exosomes are found in blood, urine and many other biological fluids, with contents that, while varied according to the cells from which they bud off, generally comprise proteins, DNA and assorted RNA molecules. The latter include messenger RNA, or transcripts dictating protein production; and microRNAs, short strings of bases that help regulate gene expression. Typically no more than 100 nanometers in size, these vesicles may be minute – about one-thousandth of a human hair’s average width – but they pack a punch.

Until recently, scant attention was paid to the existence of exosomes derived from tumor cells, much less any nefarious purposes they might harbor. Godwin, who is also The University of Kansas Cancer Center’s deputy director, has long been interested in the biology underlying gastrointestinal stromal tumors (GISTs). He decided to find out what exosomes might be up to in this malignant environment. Once metastasized, GISTs – which hail from interstitial cells of Cajal, normally involved in smooth muscle contraction along the digestive tract – are difficult to treat. The drug Gleevec may work well for the majority of these patients, but a relapse is more common than not, and about 15 percent don’t respond the first time around.

An early clue has now surfaced: Safinur Atay, Ph.D., a postdoctoral fellow in the Godwin laboratory, just reported in the December 30, 2013 issue of Proceedings of the National Academy of Sciences that mutated c-KIT, a gene central to GIST development, counts among the cargo of tumor-derived exosomes. Intrigued by this observation, Atay – the paper’s first author – and other members of Godwin’s lab also looked at whether exosomes bearing oncogenic c-KIT might influence interactions between GIST cells and the surrounding support structure of stromal cells that, over time, caves before the tumor’s outward spread.

“We’ve seen normal stromal cells, in taking up these exosomes, get converted into GIST cells; they express similar proteins and induce many of the same signaling pathways,” Godwin says. It’s akin to drinking Polyjuice Potion (which allows a person to assume a different form) in the magical world of Harry Potter – except in the case of GIST-derived exosomes, it’s not fiction.

“Tumor cells actively release higher numbers of exosomes, and we’ve found that normal recipient cells end up copying this maneuver, so there’s a snowball effect,” Godwin observes. “It’s another means for metastasis, at least locally. These exosomes are somehow able to modify other cells in the tumor microenvironment, which stimulates the production of additional factors that allow the host tumor cells to keep promoting themselves through growth and invasion.”

One such factor is MMP1, which the researchers think is a key culprit in remodeling the smooth muscle cell layers around a tumor in ways that encourage its outward growth. MMP1 belongs to a large family of enzymes called matrix metalloproteinases (MMPs) that have generated considerable interest as therapeutic targets, but clinical trials featuring MMP inhibitors have thus far yielded disappointing results. “These candidates tend to inhibit a broad spectrum of MMPs rather than individual ones,” Atay explains. “Besides, tumors can simply replenish their supply – by secreting still more exosomes that, in turn, negatively influence neighboring normal cells.”

It’s unlikely that suppressing exosome release will prove a smart clinical strategy: these minute vesicles are, after all, a completely natural means of cellular communication and, although their production goes haywire in certain cancers, there are multiple molecular mechanisms at fault. But because MMP1 and MMP2 are the family members most highly expressed in GISTs, Atay reckons metastasis could be slowed or even blocked by designing inhibitors to selectively muzzle these two proteins, despite their continued presence due to active exosome release.

The researchers’ discovery that GIST-derived exosomes contain oncogenic c-KIT could also prove therapeutically useful for monitoring tumor burden and response to therapy. In fact, while exosomes are difficult to detect in biological fluids by conventional methods, Godwin and his crew are concurrently trying to utilize tumor productivity, in terms of active exosome release, together with the power of microfluidics – a technology first developed in the 1990s, inspired by integrated semiconductor electronics – as a potential way to track disease early on. “Exosomes are Nature’s way of compacting an enrichment of biomarkers, and in tumors, there’s natural amplification of the signal to make detection easier,” he explains. “We just need to figure out how to effectively isolate exosomes and measure their cargo, so we can develop new diagnostic and prognostic assays.”

Atay and Godwin, meanwhile, are forging ahead to build a clearer picture of precisely how tumor-derived exosomes drive the malignant transformation of nearby normal cells, including some of the key immunological components involved. “Scientists are increasingly investigating not just the tumor itself, but also its microenvironment,” Atay says. “How each influences the other probably helps determine the likelihood of disease progression, and this bidirectional feedback is what we’re looking at more closely.”

“Ours is a broad-range lab; we cover a range of investigations from genetic risk factors and cancer therapeutics to molecular profiling and even drug repurposing,” Godwin adds. “So we’re very much bench-to-bedside, in terms of actually taking discoveries into clinical trials. It’s early days yet, but we hope to explore what we learn about exosomes in GISTs and apply that knowledge to other cancers.”