Finding a molecular needle in a haystack 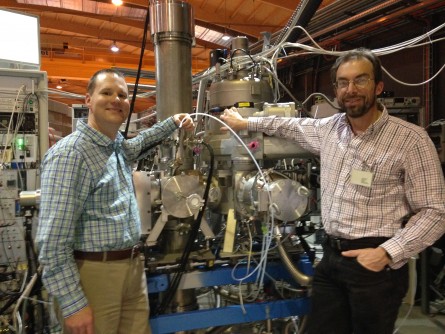 Bálint Sztáray, left, from the University of the Pacific, and Sandia National Laboratories chemist David Osborn display the PEPICO instrument.

Newswise — LIVERMORE, Calif. — Imagine being able to see the entire Statue of Liberty and a small ant on its nose simultaneously. The drastic difference in size between the two objects would seem to render this task impossible.

On a molecular level, this is exactly what a team led by Sandia National Laboratories chemists David Osborn and Carl Hayden accomplished with a special, custom-made instrument that has enhanced the power of a method called photoelectron photoion coincidence, or PEPICO, spectroscopy.

This enhanced method could yield new insights into chemical reactions in the troposphere (the lowest layer of the Earth’s atmosphere) and in low-temperature combustion. On a more general level, this breakthrough furthers the Department of Energy’s mission to provide fundamental science underpinning the storage, use and transformation of chemical energy.

Osborn and Hayden, who is now retired, conceived the design at Sandia’s Combustion Research Facility and tested it alongside Patrick Hemberger and Andras Bodi at Switzerland’s Paul Scherrer Institute, in collaboration with Krisztina Voronova and Bálint Sztáray from the University of the Pacific in Stockton, California. This research is part of an ongoing PEPICO spectroscopy collaboration between the three institutions.

Detecting elusive intermediates is a challenge with mass spectrometry

Osborn specializes in studying chemical intermediates, molecules that are extremely difficult to find and often present in miniscule quantities, but are key to unlocking chemical reaction mechanisms. These reactions include combustion reactions, atmospheric reactions and astrochemical reactions, such as in the atmosphere of Titan, Saturn’s largest moon, a model for the early Earth.

Chemical intermediates, however, are short-lived, making them difficult or impossible to detect using conventional mass spectrometry methods, especially since they are often hidden in larger mixtures. This is where PEPICO spectroscopy becomes so valuable.

“We are trying to analyze fleeting chemical intermediates. These applications come up a lot in combustion, atmospheric and catalysis chemistry,” said Osborn. “To study these fleeting-reaction intermediates in full detail, we need to know the arrangement of atoms in each molecule — its isomeric composition. Conventional mass spectrometry techniques don’t have enough selectivity and speed to accomplish this goal. We made some innovations in PEPICO to solve these problems.”

The PEPICO collaboration between Sandia Labs, the Paul Scherrer Institute and the University of the Pacific started four years ago, when the team succeeded in improving mass spectrometry’s selectivity (the ability to distinguish isomers) while maintaining its ability to study dozens of molecules simultaneously.

In the first of a series of three papers, the team showed that PEPICO spectroscopy could provide detailed fingerprints of molecules, even in a sample with many chemicals present.

There were a few kinks in this first paper that needed to be worked out. One of the drawbacks to the PEPICO method was that the mass spectrometry signal had a limited dynamic range, meaning that background noise obscured small signals representing tiny amounts of chemical compounds. The PEPICO team knew that “false” coincidence signals in the spectrum create this background noise, but did not have a method to remove this false information.

Based on Osborn’s idea of how to solve this problem, the team built a custom mass spectrometer that succeeded in improving the dynamic range one hundredfold, achieving a dynamic range of 100,000 to one. This improvement is analogous to seeing a large statue and an ant at the same time. Normally, the “signal” of the Statue of Liberty drowns out the signal of the ant. This work was published last October in the Journal of Chemical Physics.

A second improvement the team recently made is detailed in the third, most recent publication, where the team demonstrated improved mass resolution of spectrum peaks and the measurement of chemical reaction rates. Previously, PEPICO instruments had been used to study pure compounds, and therefore high mass resolution was not a primary goal.

“When you study one chemical at a time, you don’t need to know the mass with much accuracy,” said Osborn. “But our goal is to study chemical reactions with many different, unknown products, and that’s why we need good mass resolution in addition to our other requirements.”

Through the initial development of PEPICO and its improvements, the team opened doors for a wide variety of applications in which the detection of intermediates and other elusive compounds is essential.

“This prototype is a step up in our instrumentation,” said Osborn. “It shows that the final instrument we are constructing now will open our eyes to new intermediates we are still seeking, while giving us deeper insights into the ones we’ve already studied. The future is very exciting.”

PEPICO could also provide insight in combustion chemistry. Molecules called hydroperoxyalkyl radicals, QOOH for short, play a key role in low-temperature (“clean”) combustion reactions by acting as gate-keeper molecules for speeding up or slowing down chemical reactions. However, QOOH radicals are only found in small amounts and are nearly impossible to characterize using current mass spectrometry techniques. Osborn’s team was the first to directly observe the kinetics of QOOH in a Science paper published two years ago and now hopes to further study the molecules, focusing on how QOOH reacts and changes at widely varying temperatures.

“These intermediates are especially exciting because chemists have speculated they must exist, but no one had ever detected one directly or seen it with spectroscopy until 2015,” said Osborn.

By developing and improving PEPICO to measure both the smallest and the largest signals simultaneously, and to measure reaction rates, this new technique will make studying chemical reactions in the lab easier by orders of magnitude.

The work was supported by the U.S. Department of Energy’s Office of Basic Energy Sciences, Division of Chemical Sciences, Geosciences and Biosciences.