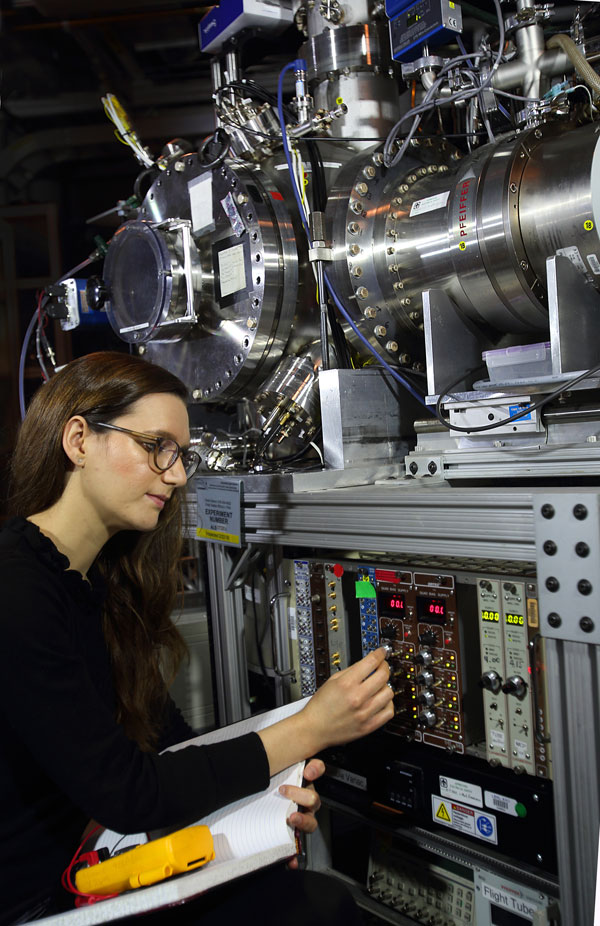 Newswise — LIVERMORE, Calif. — Volatile organic compounds can be found in the air — everywhere. A wide range of sources, including from plants, cooking fuels and household cleaners, emit these compounds directly. They also can be formed in the atmosphere through a complex network of photochemical reactions.

Researchers at Sandia National Laboratories and colleagues from other institutions investigated the reactions of hydroxyl and methylperoxy radicals to understand their impact on the atmosphere’s ability to process pollutants.

This work, which was published in Nature Communications, showed that the reactions can impact levels of a key chemical marker used to assess the understanding of the processing and abundances of pollutants. This ultimately helps our understanding of how both nature and human activity affect the chemical composition of the atmosphere.

Recent studies in this area had indicated that the reaction of methylperoxy with the hydroxyl radical occurs more rapidly than previously thought, and so this reaction could change the current understanding of chemistry in both low-temperature combustion and the Earth’s atmosphere.

The hydroxyl radical, an important molecule in combustion and atmospheric chemistry, initiates the oxidation, or processing, of fuel and pollutant molecules. When this radical reacts with fuel molecules in the presence of oxygen, a new class of radicals — known as peroxy radicals — is formed. In the Earth’s atmosphere, when the hydroxyl radical reacts with methane (which is both a greenhouse gas and the most abundant hydrocarbon), methylperoxy is created.

Rebecca Caravan, a Sandia postdoctoral appointee and lead researcher of the collaborative new effort, said investigating the subsequent reactions of peroxy radicals is critical to understanding low-temperature combustion because the peroxy radical’s fate determines to what extent fuel will undergo autoignition. The researchers wanted to understand how the reaction of hydroxyl and methylperoxy radicals could impact this — for example, whether autoignition could be inhibited due to the removal of reactive radicals and the production of relatively unreactive chemicals.

Recent theoretical work indicated that a possible product of the hydroxyl radical and methylperoxy reaction could be methanol and oxygen. These products would have significant affect on our understanding of the chemistry in Earth’s troposphere — the part of the atmosphere between zero to 10 kilometers (6 miles), which contains around 75 percent of the atmosphere’s mass.

Sandia combustion chemist Craig Taatjes, the principal investigator of this research effort, said, “We recognized that our fundamental measurements of methanol yield from the hydroxyl radical and methylperoxy reaction could have an impact on modeled atmospheric methanol abundance, so we brought in modeler colleagues who could focus on those consequences of our investigations.”

The discrepancy between modeled and measured methanol is particularly significant in the remote troposphere — regions with relatively limited influence from human activity.

Dwayne Heard, professor of atmospheric chemistry at the University of Leeds in the United Kingdom, said an understanding of these regions is needed before human changes can be understood.

“We know that changes in man-made emissions are leading to a warming of the atmosphere and a deterioration in the quality of the air that we breathe,” Heard said. “However, set against this are natural, dominant processes that occur everywhere — for example, over the oceans where there is relatively little influence from humans.”

Studies of radical-radical chemistry are complicated; the multiple side reactions need to be understood along with the reaction of interest. To tackle this, researchers from Sandia and NASA’s Jet Propulsion Laboratory employed the world-renowned capabilities at Sandia’s Combustion Research Facility and the Advanced Light Source at Lawrence Berkeley National Laboratory.

The researchers relied on the Sandia Multiplexed Photoionization Mass Spectrometer instruments developed by Sandia researchers David Osborn and Lenny Sheps. The team also used the tunable vacuum ultraviolet ionizing radiation from the Chemical Dynamics beamline at the Advanced Light Source to observe and characterize the chemistry and reaction products.

The researchers then worked to interpret their experimental observations via models and calculations. They examined the role of longer timescale chemistry on the reaction products by collaborating with partners at the University of Lille in France, who used their atmospheric simulation chamber. Additional team members at the University of Bristol in the United Kingdom used a global chemical model to assess the experimental results on the troposphere.

“It was a highly collaborative, international project with each party bringing their own world-class capabilities,” said Caravan.

The Sandia team was funded by the Department of Energy’s Basic Energy Sciences Office. The co-authors of the paper were supported by NASA and British and French agencies.

Impact on the atmosphere

Because of this collaborative effort, it is now understood that in the troposphere around 25 percent of methylperoxy radicals are removed by the fast reaction with the hydroxyl radical, meaning that fewer peroxy radicals undergo other reactions known to lead to methanol. To counterbalance that, the methanol yield from the reaction of hydroxyl radicals with methylperoxy would need to be about 15 percent, but the authors’ measure yields in the range 6-9 percent.

The implications of this result on the understanding of tropospheric methanol are significant. The hydroxyl radical and methylperoxy reaction fails to resolve the discrepancy between higher measured and lower modeled methanol abundances; in fact, this discrepancy is now exacerbated. Methanol in remote regions is now underpredicted by around a factor of 1.5 in global models of the atmosphere.

Alexander Archibald, a Cambridge University professor and an expert in the field, says the experiments led by Caravan demonstrate that methanol has additional secrets to reveal.

“While the reaction between methylperoxy radicals and hydroxyl radicals may not be a major source of methanol, models still underestimate the amount of methanol,” said Archibald. “The exciting work that Caravan and co-workers have performed closes one chapter in the story, but the book remains unfinished. Further work is required to help complete our understanding of this important compound in the atmosphere.”