Scientist Races to Save Ancient Egypt 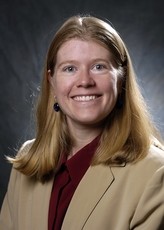 UAB Egyptologist Sarah Parcak, Ph.D. (pictured), is in a race to save ancient Egypt.

STORY:Newswise — University of Alabama at Birmingham (UAB) Egyptologist Sarah Parcak, Ph.D., is in a race against time. In Egypt, thousands of known and unknown archaeological sites are at risk of destruction from urban sprawl, expanding development and looting. Twenty-three percent of ancient sites in the East Delta region alone have disappeared in the past 30 years, with 8 percent lying under towns and 76 percent undergoing full to partial removal. Should the same rate of site destruction continue and increase, by 2050, virtually all archaeological sites, or tells, could be wiped out in the region.

"Only 1/100th of one percent of archaeological sites in Egypt have been discovered, Parcak said. "Our entire understanding of Egyptian history is based on these few discoveries. What we [Egyptologists] have discovered so far is just the tip of the iceberg."

WHAT:Parcak is using satellite imagery to find and identify tells. The technology allows her to find tells in just weeks instead of years. She became the first Egyptologist to use the methodology in 2003-2004, when she located 132 sites, some dating as far back at 3,000 B.C. Among the sites she located:

In her latest study, Parcak tested several different types of satellite imagery to determine which ones are most effective in locating tells under various environmental conditions. It's the first step toward the general use of satellite remote sensing in Egyptology. Her findings appear in this month's issue of the Journal of Field Archaeology.

Satellite remote sensing will change the field of Egyptology and may alter current theories about ancient Egypt, Parcak said. Her work is supported by the Supreme Council of Antiquities in Egypt, directed by Zahi Hawass, Ph.D.