Necessary for both innate and adaptive immune reactions; May lead to new treatment pathway

Newswise — Not just important for building strong bones, an international team of scientists has found that vitamin D also plays an essential role in the body’s fight against infections such as tuberculosis.

A potentially fatal lung disease, tuberculosis is estimated to cause 1.8 million deaths annually and especially impacts those with reduced immunity such as HIV-infected individuals, according to the World Health Organization.

In an interesting twist, people with darker skin traditionally have had a higher susceptibility to tuberculosis and areas of Africa lead the world with the highest infection rates. Scientists believe this may be partly due to the skin pigment melanin, which is more abundant in darker skin that shields the body from absorbing ultraviolet rays, but also reduces vitamin D production.

Vitamin D -- a natural hormone, rather than a vitamin-- is known to be instrumental in bone development, but also may protect against cancer and autoimmune diseases, as well as fight infections.

Published online Oct. 12 in the peer-reviewed journal, Science Translational Medicine, researchers examined the mechanisms that govern the immune system’s ability to kill or inhibit the growth of pathogens such as M. tuberculosis, the bacteria causing tuberculosis.

The team found that T-cells, which are white blood cells that play a central role in immunity, release a protein called interferon- that triggers communication between cells and directs the infected immune cells to attack the invading tuberculosis bacteria. However, this activation requires sufficient levels of vitamin D to be effective.

Scientists found that there was an 85 percent reduction of colony-forming tuberculosis bacteria in human macrophage cells that were effectively treated with interferon- in the presence of sufficient vitamin D.

“Over the centuries, vitamin D has intrinsically been used to treat tuberculosis. Sanatoriums dedicated to tuberculosis patients were traditionally placed in sunny locations that seemed to help patients -- but no one knew why this worked,” said first study author Dr. Mario Fabri, who conducted the research at UCLA and is currently at the Department of Dermatology at the University of Cologne, Germany. “Our findings suggest that increasing vitamin D levels through supplementation may improve the immune response to infections such as tuberculosis.”

The team notes that vitamin D may help both innate and adaptive immunity, two systems that work synergistically together to fight infections.

Previous research by the team found that vitamin D played a key role in the production of a molecule called cathelicidin, which helps the innate immune system kill the tuberculosis bacteria. Humans are born with innate immunity, which is the preprogrammed part of the immune system.

The current research findings demonstrate that vitamin D is also critical for the action of T-cells, key players in adaptive immunity, a highly specialized system that humans acquire over time as they encounter different pathogens.

“The findings of our previous research with innate immunity provided us with a new opportunity to take a look at the effects and role of Vitamin D with acquired immunity, both critical systems of human defense,” said senior investigator Dr. Robert Modlin, Klein Professor of Dermatology and Distinguished Professor of Medicine and Microbiology, Immunology and Molecular Genetics, Chief of Dermatology, Vice Chair for Cutaneous Medicine and Dermatological Research, Department of Medicine, David Geffen School of Medicine at UCLA.

Surprisingly, researchers found that although both the innate and acquired immune systems start out by using different receptors to trigger a complex chain reaction in infected cells to kill the tuberculosis bacteria, both converge early on to follow the same pathway that utilizes vitamin D.

Specifically, in the current study, researchers discovered that T-cells released interferon-γ, which not only activated the infected cells called macrophages to generate cathelicidin and other proteins to kill tuberculosis, but also ensured that these proteins, like a honing device, are delivered to the compartment of the cell where the bacteria resides. The cells then gobble-up the infectious areas containing bacteria.

Researchers also note that this is the first study to demonstrate that the protein interferon-γ activates cells to kill the tuberculosis bacteria.

“The role of interferon-γ has been speculated for years in numerous studies, but previous research didn’t take into account that sufficient vitamin D was needed to help interferon- trigger an effective immune response,” said study author Dr. John Adams, professor of orthopaedic surgery, Geffen School of Medicine. “Now we understand better how this chain reaction works.”

According to the team, the findings are also important because they show that this unique pathway to fight tuberculosis cannot be studied in a mouse model. These nocturnal animals are not exposed to the sun to absorb vitamin D and as a result, use an entirely different pathway than humans to kill tuberculosis.

Fabri notes that most people with tuberculosis are asymptomatic, perhaps due to successful immunological control and sufficient vitamin D to keep the infection from developing into active disease.

According to researchers, the next step is to initiate clinical trials to learn whether vitamin D supplementation augments resistance to host resistance to tuberculosis and other infections.

The study was funded by the National Institutes of Health; the Deutsche Forschungsgemeinschaft, which is the German research association and the Basic Science Research Program through the National Research Foundation of Korea. 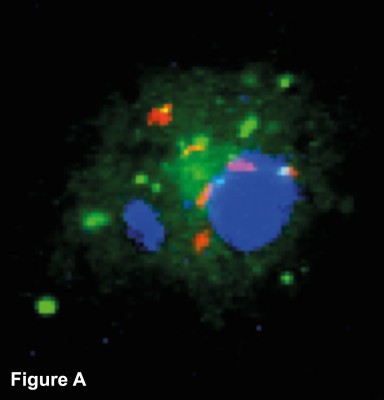 Caption: Figure A: Mycobacterium tuberculosis (red) is hiding in human macrophages (blue and green) cultured in vitamin D deficient serum so it is not being efficiently killed by cathelicidin and other proteins. 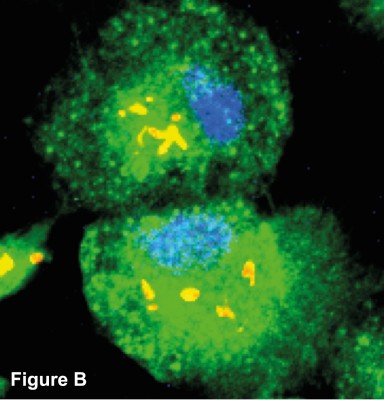 Caption: Figure B: In human macrophages cultured in vitamin D sufficient serum, after autophagy is up-regulated, the bacterium is transported to compartments (green) where TB is killed (the overlay of the green fluorescence and the red fluorescence appears as yellow).