The difference between the cognitive styles of two monkeys is clearly visible in the neural population vectors for hand movement direction. The instant the target (green) appears, monkey H plans to move directly to it (his direction decoding vector lengthens in the direction of the target). When the obstacle then appears, the vector shrinks and rotates to a direction that will allow him to avoid the obstacle and then lengthens again. In contrast, monkey G doesn’t react to the appearance of the target. Knowing that his path to the target may be blocked by the obstacle he waits until the task has been fully specified before planning his move. 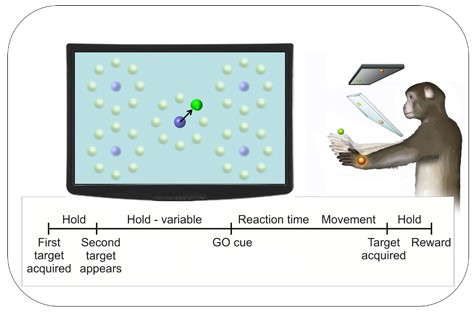 In the classic center-out reaching task, a monkey reaches from a central location to targets on a circle surrounding the starting position. This task does not allow the neural encoding for hand position to be separated from the neural encoding for hand velocity. If the starting position varies, however, as in the task shown here, hand position and initial hand velocity can be disambiguated. 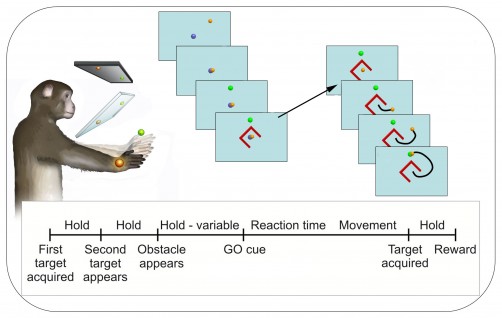 The obstacle-avoidance task is a variation on the center-out reaching task in which an obstacle sometimes prevents the monkey from moving directly to the target. The monkey must first place a cursor (yellow) on the central target (purple). This was the starting position. After the first hold, a second target appeared (green). After the second hold an obstacle appeared (red box). After the third hold, the center target disappeared, indicating a “go” for the monkey, which then moved the cursor out and around the obstacle to the target.

Newswise — Anyone who has looked at the jagged recording of the electrical activity of a single neuron in the brain must have wondered how any useful information could be extracted from such a frazzled signal.

But over the past 30 years, researchers have discovered that clear information can be obtained by decoding the activity of large populations of neurons.

Now, scientists at Washington University in St. Louis, who were decoding brain activity while monkeys reached around an obstacle to touch a target, have come up with two remarkable results.

Their first result was one they had designed their experiment to achieve: they demonstrated that multiple parameters can be embedded in the firing rate of a single neuron and that certain types of parameters are encoded only if they are needed to solve the task at hand.

Their second result, however, was a complete surprise. They discovered that the population vectors could reveal different planning strategies, allowing the scientists, in effect, to read the monkeys’ minds.

By chance, the two monkeys chosen for the study had completely different cognitive styles. One, the scientists said, was a hyperactive type, who kept jumping the gun, and the other was a smooth operator, who waited for the entire setup to be revealed before planning his next move. The difference is clearly visible in their decoded brain activity.

The study was published in the July 19th advance online edition of the journal Science.

All in the task

The standard task for studying voluntary motor control is the “center-out task,” in which a monkey or other subject must move its hand from a central location to targets placed on a circle surrounding the starting position.

To plan the movement, says Daniel Moran, PhD, associate professor of biomedical engineering in the School of Engineering & Applied Science and of neurobiology in the School of Medicine at Washington University in St. Louis, the monkey needs three pieces of information: current hand and target position and the velocity vector that the hand will follow.

In other words, the monkey needs to know where his hand is, what direction it is headed and where he eventually wants ot to go.

To solve this problem and isolate target position from movement direction, doctoral student Thomas Pearce designed a novel obstacle-avoidance task to be done in addition to the center-out task.

Crucially, in one-third of the obstacle-avoidance trials, either no obstacle appeared or the obstacle didn’t block the monkey’s path. In either case, the monkey could move directly to the target once he got the “go” cue.

In other words, the monkeys were encoding the position of the target only when it did not lie along a direct path from the starting position and they had to keep its position “in mind” as they initially moved in the “wrong” direction.

And then some magic happens

“It wasn’t working,” Pearce says, “and I was frustrated because I couldn’t figure out why the data looked so inconsistent. So I separated the data by monkey, and then I could see, wow, they’re very different. They’re approaching this task differently and that’s kind of cool.”

The difference between the monkey’s’ styles showed up during the second hold. At this point in the task, the target was visible, but the obstacle had not yet appeared.

The hyperactive monkey, called monkey H, couldn’t wait. His population vector during that hold showed that he was poised for a direct reach to the target. When the obstacle was then revealed, the population vector shortened and rotated to the direction he would need to move to avoid the obstacle.

The smooth operator, monkey G, in the meantime, idled through the second hold, waiting patiently for the obstacle to appear. Only when it was revealed did he begin to plan the direction he would move to avoid the obstacle.

Because he didn’t have to correct course, monkey G’s strategy was faster, so what advantage was it to monkey H to jump the gun? In the minority of trials where no obstacle appeared, monkey H approached the target more accurately than monkey G. Maybe monkey H is just cognitively adapted to a Whac-A-Mole world. And monkey G, when caught without a plan, was at a disadvantage.

Working with the monkeys, the scientists had been aware that they had very different personalities, but they had no idea this difference would show up in their neural recordings.