In the brains of mice with Alzheimer’s disease, decreased levels of JIP3 (right) induce the formation of larger amyloid plaques (red) and increased numbers of swollen axons filled with lysosomes (green). 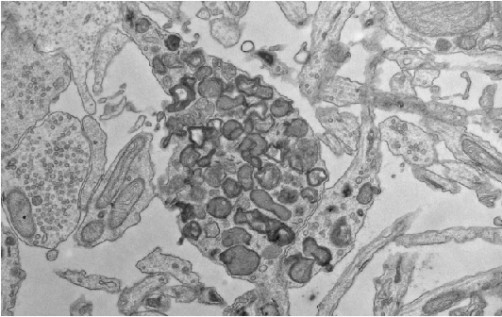 Electron microscopy shows the accumulation of lysosomes in the swollen axon of a neuron lacking JIP3.

Newswise — Researchers from Yale University School of Medicine have discovered that defects in the transport of lysosomes within neurons promote the buildup of protein aggregates in the brains of mice with Alzheimer’s disease. The study, which will be published August 7 in The Journal of Cell Biology (JCB), suggests that developing ways to restore lysosome transport could represent a new therapeutic approach to treating the neurodegenerative disorder.

Alzheimer’s disease is the sixth leading cause of death in the United States, with over 5 million Americans currently estimated to be living with the disorder. A characteristic feature of the disease is the formation of amyloid plaques inside the brain. The plaques consist of extracellular aggregates of a toxic protein fragment called β-amyloid surrounded by numerous swollen axons, the parts of neurons that conduct electric impulses to other nerve cells.

These axonal swellings are packed with lysosomes, cellular garbage disposal units that degrade old or damaged components of the cell. In neurons, lysosomes are thought to “mature” as they are transported from the ends of axons to the neuronal cell body, gradually acquiring the ability to degrade their cargo. The lysosomes that get stuck and accumulate inside the axonal swellings associated with amyloid plaques fail to properly mature, but how these lysosomes contribute to the development of Alzheimer’s disease is unclear. One possibility is that they promote the buildup of β-amyloid because some of the enzymes that generate β-amyloid by cleaving a protein called amyloid precursor protein (APP) accumulate in the swellings with the immature lysosomes.

Shawn Ferguson and colleagues at Yale University School of Medicine investigated this possibility by impeding the transport of lysosomes in mouse neurons. The researchers found that neurons lacking a protein called JIP3 failed to transport lysosomes from axons to the cell body, leading to the accumulation of lysosomes in axonal swellings similar to those seen in Alzheimer’s disease patients. The swellings also accumulated APP and two enzymes—called BACE1 and presenilin 2—that cleave it to generate β-amyloid. Neurons lacking JIP3 therefore generated increased amounts of β-amyloid.

The researchers then removed one copy of the gene encoding JIP3—halving the amount of JIP3 protein—from mice that were already prone to developing Alzheimer’s disease. These animals produced more β-amyloid and formed larger amyloid plaques, surrounded by an increased number of swollen axons.

“Collectively, our results indicate that the axonal accumulations of lysosomes at amyloid plaques are not innocent bystanders but rather are important contributors to APP processing and amyloid plaque growth,” Ferguson says.

Genetic and environmental factors that impede lysosomal transport may therefore contribute to the progression of Alzheimer’s disease. For example, traumatic brain injuries, which are thought to be significant risk factors for Alzheimer’s disease, are known to disrupt transport along axons and induce axonal swelling.

“The identification of other proteins that function alongside JIP3 in regulating the axonal transport and maturation of lysosomes could ultimately lead to strategies to modulate the axonal abundance of lysosomes for therapeutic purposes,” Ferguson says.

About The Journal of Cell Biology

The Journal of Cell Biology (JCB) features peer-reviewed research on all aspects of cellular structure and function. All editorial decisions are made by research-active scientists in conjunction with in-house scientific editors. JCB provides free online access to many article types from the date of publication and to all archival content. Established in 1955, JCB is published by The Rockefeller University Press. For more information, visit jcb.org.

Caption: In the brains of mice with Alzheimer’s disease, decreased levels of JIP3 (right) induce the formation of larger amyloid plaques (red) and increased numbers of swollen axons filled with lysosomes (green).

Caption: Electron microscopy shows the accumulation of lysosomes in the swollen axon of a neuron lacking JIP3.