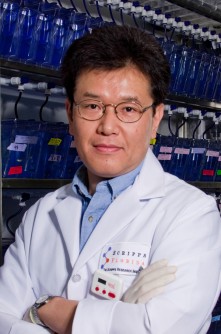 Newswise — JUPITER, FL, July 17, 2014 – It is something of an eternal question: Can we slow or even reverse the aging process? Even though genetic manipulations can, in fact, alter some cellular dynamics, little is known about the mechanisms of the aging process in living organisms.

Now scientists from the Florida campus of The Scripps Research Institute (TSRI) have found in animal models that a single gene plays a surprising role in aging that can be detected early on in development, a discovery that could point toward the possibility of one day using therapeutics, even some commonly used ones, to manipulate the aging process itself.

“We believe that a previously uncharacterized developmental gene known as Spns1 may mediate the aging process,” said Shuji Kishi, a TSRI assistant professor who led the study, published recently by the journal PLOS Genetics. “Even a partial loss of Spns1 function can speed aging.”

Using various genetic approaches to disturb Spns1 during the embryonic and/or larval stages of zebrafish—which have emerged as a powerful system to study diseases associated with development and aging—the scientists were able to produce some models with a shortened life span, others that lived long lives.

While most studies of “senescence”—declines in a cell's power of division and growth—have focused on later stages of life, the study is intriguing in exploring this phenomenon in early stages. “Mutations to Spns1 both disturbs developmental senescence and badly affects the long-term bio-chronological aging process,” Kishi said.

The new study shows that Spns1, in conjunction with another pair of tumor suppressor genes, beclin 1 and p53 can, influences developmental senescence through two differential mechanisms: the Spns1 defect was enhanced by Beclin 1 but suppressed by ‘basal p53.’ In addition to affecting senescence, Spns1 impedes autophagy, the process whereby cells remove unwanted or destructive proteins and balance energy needs during various life stages.

Building on their insights from the study, Kishi and his colleagues noted in the future therapeutics might be able to influence aging through Spns1. He noted one commonly used antacid, Prilosec, has been shown to temporarily suppress autophagic abnormality and senescence observed in the Spns1 deficiency.

The first author of the study, “Aberrant Autolysosomal Regulation Is Linked to The Induction of Embryonic Senescence: Differential Roles of Beclin 1 and p53 in Vertebrate Spns1 Deficiency,” is Tomoyuki Sasaki of TSRI. Other authors include Shanshan Lian, Jie Qi, Sujay Guha, Jennifer L. Johnson, Sergio D. Catz and Matthew Gill of TSRI; Peter E. Bayliss of the University Health Network, Toronto, Canada; Christopher E. Carr of the Massachusetts Institute of Technology; Patrick Kobler and Kailiang Jia of Florida Atlantic University; and Daniel J. Klionsky of the University of Michigan. The paper can be accessed at http://www.plosgenetics.org/article/info%3Adoi%2F10.1371%2Fjournal.pgen.1004409