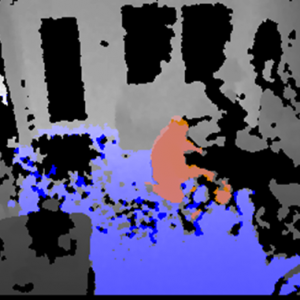 Photo courtesy of MU Center for Eldercare and Rehabilitation Technology.

A sensor system developed and used by researchers at the University of Missouri produces images and sends automatic e-mail alerts that can be used to predict a fall within a three-week period.

Newswise — COLUMBIA, Mo. – Each year, millions of people—especially those 65 and older—fall. Such falls can be serious, leading to broken bones, head injuries, hospitalizations or even death. Now, researchers from the Sinclair School of Nursing and the College of Engineering at the University of Missouri found that sensors that measure in-home gait speed and stride length can predict likely falls. This technology can assist health providers to detect changes and intervene before a fall occurs within a three-week period.

“We have developed a non-wearable sensor system that can measure walking patterns in the home, including gait speed and stride length,” said Marjorie Skubic, director of the MU Center for Eldercare and Rehabilitation Technology and professor of electrical and computer engineering. “Assessment of these functions through the use of sensor technology is improving coordinated health care for older adults”

To predict falls, researchers used data collected from sensor systems at TigerPlace, an innovative aging-in-place retirement residence, located in Columbia, Mo. The system generated images and an alert email for nurses indicating when irregular motion was detected. This information could be used to assist nurses in assessing functional decline, providing treatment and preventing falls.

“Aging should not mean that an adult suddenly loses his or her independence,” said Marilyn Rantz, Curators’ Professor Emerita of Nursing. “However, for many older adults the risk of falling impacts how long seniors can remain independent. Being able to predict that a person is at risk of falling will allow caretakers to intervene with the necessary care to help seniors remain independent as long as possible.”

Results from an analysis of the sensor system data found that a gait speed decline of 5 centimeters per second was associated with an 86.3 percent probability of falling within the following three weeks. Researchers also found that shortened stride length was associated with a 50.6 percent probability of falling within the next three weeks.

Additional research led by Rantz and Skubic recently received an award from Mather LifeWays ® Institute on Aging. Their research has found that by integrating care coordination and sensor technology at TigerPlace, residents are able to live independently on average of four years compared to the national average of 22 months.

“Using embedded sensors in independent living to predict gait changes and falls,” recently was published in the Western Journal of Nursing Research. Future research on the sensor systems will focus on how nurses can best use the fall prediction statistics to intervene before the fall occurs. Contributing to the study were MU researchers Lorraine Phillips, Chelsea DeRoche, Gregory Alexander, Laurel Despins, Carmen Abbott, Bradford Harris, Colleen Galambos and Richelle Koopman. Research was supported by the National Institutes of Health (RO1NR014255). The content is solely the responsibility of the authors and does not necessarily represent the official views of the funding agency.