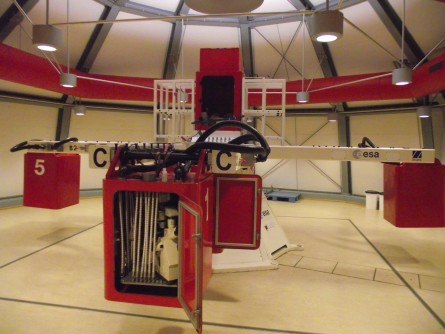 Newswise — University of Montreal researchers found that changes in gravity affect the reproductive process in plants. Gravity modulates traffic on the intracellular “highways” that ensure the growth and functionality of the male reproductive organ in plants, the pollen tube. “Just like during human reproduction, the sperm cells in plants are delivered to the egg by a cylindrical tool. Unlike the delivery tool in animals, the device used during plant sex consists of a single cell, and only two sperm cells are discharged during each delivery event,” explained Professor Anja Geitmann of the university’s Department of biology. “Our findings offer new insight into how life evolved on Earth and are significant with regards to human health, as a traffic jam on these highways that also exist in human cells can cause cancer and illnesses such as Alzheimer’s.”

The interior of animal and plant cells is like a city, with factories—called organelles—dedicated to manufacturing, energy production and waste processing. A network of intracellular "highways" enables the communication between these factories and the delivery of cargo between them and between the inside of the cell and its external environment. Plant cells have a particularly busy highway system. “Researchers already knew that humans, animals and plants have evolved in response to Earth’s gravity, and that they are able to sense it,” Geitmann explained. “What we are still discovering is how the processes occurring within the cells of the human and plant bodies are affected by the more intense gravity, or hypergravity, that would be found on a large planet, or the microgravity that resembles the conditions on a space craft. Intracellular transport processes are particularly sensitive to disturbance, with dramatic consequences for cell functioning. How these processes are affected by a change in gravity is poorly understood.”

The cells were placed into a large centrifuge, along with a camera attached to a microscope, enabling the researchers to track in real time how the cells develop in the intense gravity generated by the centrifuge. “Thanks to the facilities at the European Space Agency, I was able to determine how hypergravity and simulated microgravity affect the intracellular trafficking in the rapidly growing pollen tube,” explained Dr. Youssef Chebli, a researcher in Geitmann’s lab. “We chose pollen, the carrier of the male sperm cells, as our model because of its pivotal role in plant reproduction and agriculture and because of its extraordinarily rapid growth, meaning that we could observe the effects of the hypergravity within seconds.”

The researchers stained specific structures within the cells, which revealed how the cellular components move around and how the cellular transport logistics responds to the changing gravity environment. “We found that intracellular traffic flow is compromised under hyper-gravity conditions and that both hyper and microgravity affect the precisely coordinated construction of the cellular envelope in the growing cell,” Chebli said. “This allows us not only to understand general principles of the reproductive mechanism in plants but, more importantly, how the intracellular transport machinery in eukaryotic cells responds to altered gravity conditions. Our findings have implications for human health as similar effects are likely to occur in human cells such as neurons where long distance intracellular transport is crucial.”

About the study:Chebli and Geitmann’s research was undertaken at the Large Diameter Centrifuge facility at European Space Agency’s European Space Research and Technology Centre (ESTEC) in Noordwijk, the Netherlands. They have been invited to perform their experiments there under the ‘Spin Your Thesis!’ programme, which gives university students the opportunity to perform a scientific or technology experiment which is linked to their syllabus, by participating in a centrifuge campaign that provides hypergravity conditions.