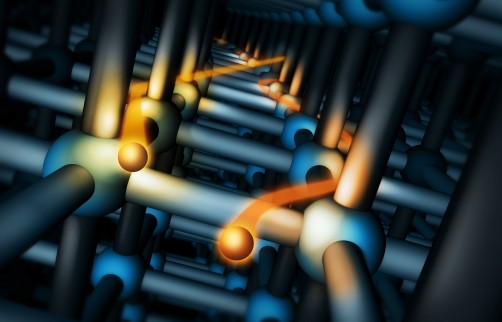 Researchers have used a bent crystal lattice to deflect highly energetic electron beams at SLAC’s End Station A. Depending on the angle at which an incoming electron (orange and yellow spheres) enters a lattice plane (two vertical planes highlighted by the blue spheres), the electron can either become trapped in the plane and follow the crystal bend (orange path on the right), or bounce off the plane in the opposite direction from the curvature (yellow path on the left). These processes are called channeling and volume reflection, respectively. The crystal lattice shown in the image is a simplified schematic of the more complex crystal used in the study.

Newswise — An international team of researchers working at the Department of Energy’s SLAC National Accelerator Laboratory has demonstrated that a bent silicon crystal can bend the paths of focused, very energetic electron beams much more than magnets used today. The method could be of interest for particle accelerator applications such as next-generation X-ray lasers that will help scientists unravel atomic structures and motions in unprecedented detail.

“Bent crystals can be used, for instance, to deflect unwanted electrons in the outer regions of an electron beam, effectively peeling them away to leave only the core of the beam behind,” said SLAC researcher Uli Wienands, who led the project. “Our study has shown that this can be done with high-energy electron beams as well.” This procedure of cleaning up the electron beam, called beam collimation, is important for X-ray lasers, for example, to prevent irradiation of and damage to the permanent magnets that generate the X-ray light.

Bent crystals can also introduce extraordinarily tight curvatures into electron beams: The deflections achieved in this study would require magnets 26 times stronger than the ones in the world’s largest particle accelerator, the Large Hadron Collider at CERN, the European particle physics laboratory. Since deflected electrons emit very intense light, the tighter bend could potentially be exploited to produce intense X-rays and gamma rays.

Crystals have already been used to deflect and collimate proton beams. But the way electrons, which have the opposite charge, propagate through a crystal lattice – a three-dimensional grid of positively charged atomic nuclei – has not been studied under beam conditions planned for forthcoming accelerator applications such as SLAC’s future X-ray laser LCLS-II. The new study, published Feb. 19 in Physical Review Letters, closes this gap.

In their experiment at SLAC’s End Station A Test Beam facility – one of only a few machines in the world that can generate intense, focused electron beams with an energy of several billion electronvolts – the researchers sent electrons through a specifically prepared bent silicon crystal that was merely as thin as a sheet of paper. They rotated the crystal to change the angle at which the electrons entered the crystal lattice and measured the resulting beam deflection with a phosphor screen.

When electrons hit the crystal lattice at a relatively large angle, they plowed straight through.

However, when the angle decreased, the crystal deflected the beam to a new position on the screen. “Below a certain critical angle, the electron bounces off a plane of the crystal lattice and is reflected in the direction opposite to the crystal bend,” Wienands says. This process is called volume reflection.

For even smaller angles, the electrons became trapped in the plane of the crystal lattice, and the deflected beam followed the crystal’s bend, an effect known as channeling.

The scientists observed that volume reflection was a very efficient process, with up to 95 percent of the electrons being reflected. Channeling led to larger deflections but was also less efficient, with only a little more than 20 percent of electrons remaining trapped over the length of the crystal.

Since the initial experiment described in the present paper, the researchers have measured channeling and volume reflection over a larger energy range, enabling them to predict how these processes can be used at future high-energy electron-positron colliders that will help scientists better understand the Higgs boson and other fundamental particles in the universe. In this context, it is also important to analyze channeling and volume reflection for positrons, the antiparticles of electrons. The results of these experiments at SLAC's Facility for Advanced Accelerator Experimental Tests (FACET), a DOE Office of Science User Facility, will be the subject of future publications.

In parallel, Wienands and his colleagues are developing the idea of building a “crystal undulator” for electron beams. Regular undulators are large magnetic structures that force electrons onto an oscillating flight path, where they emit intense X-rays at every bend. “With a few-millimeters-long crystal, one could potentially replace several tens of meters of magnetic structure,” Wienands says.

Most experiments so far have shown crystal undulators to be ineffective for electrons; instead they used positrons, which are difficult and expensive to generate. A device that works with electron beams would therefore be a significant development.

The study was conducted by an international research team with contributions from SLAC and the California Polytechnic State University in the United States, the University of Aarhus in Denmark and the University of Ferrara/Istituto Nazionale di Fisica Nucleare Section of Ferrara in Italy.