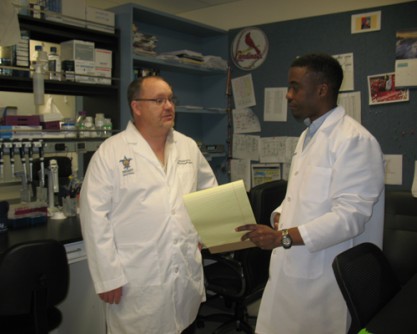 Newswise — ST. LOUIS — In research published in Cancer Cell, Thomas Burris, Ph.D., chair of pharmacology and physiology at Saint Louis University, has, for the first time, found a way to stop cancer cell growth by targeting the Warburg Effect, a trait of cancer cell metabolism that scientists have been eager to exploit.

Unlike recent advances in personalized medicine that focus on specific genetic mutations associated with different types of cancer, this research targets a broad principle that applies to almost every kind of cancer: its energy source.

The Saint Louis University study, which was conducted in animal models and in human tumor cells in the lab, showed that a drug developed by Burris and colleagues at Scripps Research Institute can stop cancer cells without causing damage to healthy cells or leading to other severe side effects.

The Warburg EffectMetabolism – the ability to use energy – is a feature of all living things. Cancer cells aggressively ramp up this process, allowing mutated cells to grow unchecked at the expense of surrounding tissue.

“Targeting cancer metabolism has become a hot area over the past few years, though the idea is not new,” Burris said.

Since the early 1900s, scientists have known that cancer cells prefer to use glucose as fuel even if they have plenty of other resources available. In fact, this is how doctors use PET (positron emission tomography) scan images to spot tumors. PET scans highlight the glucose that cancer cells have accumulated.

This preference for using glucose as fuel is called the Warburg effect, or glycolysis.

In his paper, Burris reports that the Warburg effect is the metabolic foundation of oncogenic (cancer gene) growth, tumor progression and metastasis as well as tumor resistance to treatment.

Cancer’s Goal: To Grow and DivideCancer cells have one goal: to grow and divide as quickly as possible. And, while there are a number of possible molecular pathways a cell could use to find food, cancer cells have a set of preferred pathways.

“In fact, they are addicted to certain pathways,” Burris said. “They need tools to grow fast and that means they need to have all of the parts for new cells and they need new energy.”

“Cancer cells look for metabolic pathways to find the parts to grow and divide. If they don’t have the parts, they just die,” said Burris. “The Warburg effect ramps up energy use in the form of glucose to make chemicals required for rapid growth and cancer cells also ramp up another process, lipogenesis, that lets them make their own fats that they need to rapidly grow.”

If the Warburg effect and lipogenesis are key metabolic pathways that drive cancer progression, growth, survival, immune evasion, resistance to treatment and disease recurrence, then, Burris hypothesizes, targeting glycolysis and lipogenesis could offer a way to stop a broad range of cancers.

Cutting off the Energy SupplyBurris and his colleagues created a class of compounds that affect a receptor that regulates fat synthesis. The new compound, SR9243, which started as an anti-cholesterol drug candidate, turns down fat synthesis so that cells can’t produce their own fat. This also impacts the Warburg pathway, turning cancer cells into more normal cells. SR9243 suppresses abnormal glucose consumption and cuts off cancer cells’ energy supply.

When cancer cells don’t get the parts they need to reproduce through glucose or fat, they simply die.

Because the Warburg effect is not a feature of normal cells and because most normal cells can acquire fat from outside, SR9243 only kills cancer cells and remains non-toxic to healthy cells.

The drug also has a good safety profile; it is effective without causing weight loss, liver toxicity, or inflammation.

Promising ResultsSo far, SR9243 has been tested in cultured cancer cells and in human tumor cells grown in animal models. Because the Warburg pathway is a feature of almost every kind of cancer, researchers are testing it on a number of different cancer models.

“It works in a wide range of cancers both in culture and in human tumors developing in animal models,” Burris said. “Some are more sensitive to it than others. In several of these pathways, cells had been reprogramed by cancer to support cancer cell growth. This returns the metabolism to that of more normal cells.”

In human tumors grown in animal models, Burris said, “It worked very well on lung, prostate, and colorectal cancers, and it worked to a lesser degree in ovarian and pancreatic cancers.”

It also seems to work on glioblastoma, an extremely difficult to treat form of brain cancer, though it isn’t able to cross the brain/blood barrier very effectively. The challenge for researchers in this scenario will be to find a way to allow the drug to cross this barrier, the body’s natural protection for the brain, which can make it difficult for drug treatments to reach their target.

And, in even more promising news, it appears that when SR9243 is used in combination with existing chemotherapy drugs, it increases their effectiveness, in a mechanism apart from SR9243’s own cancer fighting ability.