The Cat and the Scat 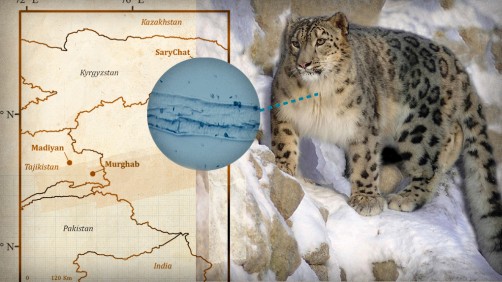 Newswise — In order to create effective conservation programs to help protect and conserve populations of endangered snow leopards, whose estimated population is between 4,500-7,500 in the wild, University of Delaware researchers are studying their scat to try and understand what the large cats are eating.

While studying snow leopard scat is one of the least invasive ways to look at what the animals are eating and gauge their food preferences, according to a new UD study it may not always be the most accurate. Researchers found that past food-habit studies on snow leopards could have been biased by the inclusion of non-target species in fecal analysis, potentially misinforming managers about the prey requirements that allow snow leopard populations to succeed.

The research was led by Sarah Weiskopf, who recently received her master’s degree from the College of Agriculture and Natural Resources and who did the work as part of her undergraduate senior thesis; Kyle McCarthy, assistant professor of wildlife ecology; and Shannon Kachel, a graduate student who works with McCarthy. The findings were published in the Wildlife Society Bulletin.

As a result of non-target species possibly being included in past research studies, it has been thought that snow leopards — who lack an abundance of natural prey — consume great numbers of small mammals such as marmots, hares and pika, as well as wild ungulates, which are larger hooved animals such as ibex.

Weiskopf explained that a big problem with collecting and identifying scat in the field is that researchers mostly rely on morphological characteristics such as shape, size or associated signs of snow leopards, and since scat from different species can look similar, this can lead to misrepresented population estimates and errors in reporting what the snow leopards are actually eating.

The researchers wanted to look at the problem in a blind fashion, comparing their data sets of what they believed to be snow leopards and what those supposed snow leopards ate with a data set of snow leopard scat that was confirmed through genetic analysis to be from actual snow leopards.

“That’s what we consider the bias in our food habit studies and that was the ultimate goal of Sarah’s project -- to find out how far off we may have been in the past with what snow leopards eat and then ultimately refining our understanding of what they eat,” said McCarthy.

“We don’t want to overstate our results because this was just one study, but we did notice that if we were using the blind approach, we definitely had a lot more small mammal occurrence in those scats. When we used genetics to pre-screen the scat and find out which ones were actually snow leopard, there were many fewer small mammals in those scats,” said McCarthy, who added that many of the small mammals consumed in the original blind data set were much more associated with red fox.

“It’s a little bit of conjecture, but our thought is that a lot of food habit studies that have not been able to verify that their scat is actually from the species that they’re studying probably do have this bias soaking in from other species,” said McCarthy.

To determine what the snow leopards were actually eating, the researchers pulled hairs found in the samples and studied them on slides treated with nail polish.

All hairs have a different scale pattern on them and the researchers could tell the individual species based on the scale pattern or the characteristics of the medulla.

The research was funded by a National Science Foundation Experimental Program to Stimulate Competative Research (EPSCoR) grant and the state of Delaware as well as the International Snow Leopard Trust, Kumtor Operating Company, Panthera Foundation and the Wildlife Conservation Society.