Social Animals Have Tipping Points, Too 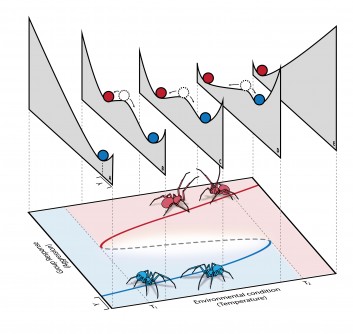 This image shows a hysteresis window between an environmental condition (heat) and group behavior (degree of infighting) in social spiders as they respond to heat stress. Groups that have been in an agitated state (red) tend to remain agitated, whereas calm groups (blue) tend to remain calm over a common temperature range.

Newswise — In relatively cool temperatures, Anelosimus studiosus spiders lay their eggs and spin their webs and share their prey in cooperative colonies from Massachusetts to Argentina. Temperatures may vary, but the colonies continue to work together. That is, until 31 degrees C; then the spiders start to attack each other.

Like many dynamic, complex systems, these colonies of social spiders have a tipping point where some small environmental perturbation can cause an abrupt and dramatic shift – a bifurcation – in the behavior of the system.

“These shifts are fundamental changes in the underlying dynamics of the system,” says Santa Fe Institute Postdoctoral Fellow Joshua Garland, a co-author on a new paper published in Proceedings of the Royal Society B. Scientists often need entirely different models to describe a system prior to and after it crosses a tipping point.

“There’s been a lot of work done on the math and physics side to identify different types of bifurcations in dynamical systems,” says Santa Fe Institute Postdoctoral Fellow Elizabeth Hobson, another Santa Fe Institute co-author. “But the popular, metaphorical uses of tipping points in other fields can be problematic. In many social systems, we have an intuition about what tipping points are, but it’s mostly used qualitatively.”

The previous quantitative approaches have revealed that a system crossing a tipping point might have a difficult time returning to its previous state even if the environmental conditions are reversed. This property, termed hysteresis, means that a system can have two very different stable states that can co-exist depending on which direction the environment is changing and its historical dynamics.

For those heat-stressed spiders, it’s usually not good enough to bring their environments back to just below the tipping point – to 30 degrees C. Even as the temperature drops below that point, their societies remain agitated and continue to fight for another two-degree Celsius decrease.

“This paper is a call-to-action, inviting behavioral ecologists and evolutionary biologists to leverage this framework to explore tipping points in their own systems,” says Pruitt. Future studies might focus on specific species, or might explore the interactions between individual and emergent group-level tipping points. Gaining a more robust understanding of these tipping points could lead to more effective conservation efforts.