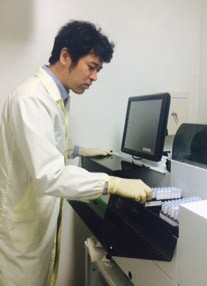 Soil samples from Fukushima, Japan are tested for a range of characteristics.

Newswise — March 24, 2015 - Radiation suddenly contaminates the land your family has farmed and lived on for generations. Can soil play a role in protecting crops and human health?

Research in Fukushima, Japan may lend an answer. On March 11, 2011, a magnitude 9.0 earthquake and tsunami caused wide spread destruction in Japan. This included the Fukushima Daiichi nuclear power plant. The plant’s nuclear meltdown released a large amount of radioactivity into the environment. The Japanese government evacuated over 100,000 people in the 30 km zone around the plant.

Lead researcher Atsushi Nakao’s study is the first to investigate the soil’s physical and chemical properties in rice fields around the Fukushima site. The study, published in the Journal of Environmental Quality, examined factors affecting soil-to-plant transfer of radioactive cesium (radiocesium) in the Fukushima area.

Radiocesium dissolves easily in water, allowing it to spread quickly. However, different soils have the ability to retain various toxins and prevent them from spreading or entering the food chain. The authors measured the ability of a large number of soil samples collected from Fukushima to intercept radiocesium. They found success depends on various factors.

One key factor is the presence of rough or weathered edges of certain minerals, such as mica, in the soil. These rough edges catch the radiocesium and prevent its movement. This is the frayed edge site (FES) concentration. Nakao explains, however, that “quantification of the FES with a simple experiment has proven difficult.” A “surrogate” measurement used by soil scientists is the radiocesium interception potential (RIP). This measurement is time-consuming and requires specialized facilities, preventing its measure at local institutes.

Thus, Nakao’s study looked for and found that other, more easily measured soil properties to predict the radiocesium interception potential (RIP) of a soil. “These findings may be useful in screening soils that are particularly vulnerable to transferring radiocesium to plants grown in them,” Nakao says. “However, the amounts of radiocesium transferred to plants are normally negligible, because most of the radiocesium is strongly fixed on the frayed edge site.”

For example, soils with rich organic material show low RIP. The high concentration (over 6%) of carbon and the low acidity of the richer soil decrease the RIP. Soils with higher phosphate absorption also show lower RIP.

Although the study obtained a rough relationship between RIP and soil properties, Nakao observes that additional factors may be involved. He suggests that future research should examine the contribution of mica in the silt or sand fraction to RIP.

Nakao is assistant professor in the graduate school of Life and Environmental Sciences at Kyoto Prefectural University. The research is published in the Journal of Environmental Quality, doi:10.2134/jeq2014.10.0423.