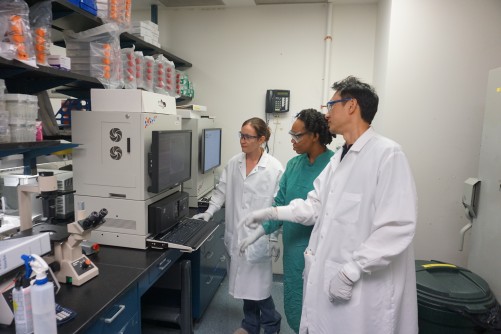 Southern Research scientists view the device counting the number of areas on the plate where the Zika virus is replicating.

Newswise — Southern Research scientists are investigating how the Zika virus is able to find a safe harbor in an infected host’s tissue and stage a rebound weeks after the virus was seemingly cleared by the immune system.

Evidence of a Zika virus rebound, called a “secondary peak” following an initial infection, emerged during a Southern Research-funded project to determine how the virus progresses in infected cynomolgus macaques.

In that study, researchers found an ever increasing presence of viral RNA, a scientific marker for the presence of the virus itself, in the testes of monkeys. Prolonged shedding of the virus was also detected in urine.

“We hypothesized that the Zika virus is using the immune privileged tissue as a reservoir and going dormant, or in low replication mode, just hiding there,” said Fusataka Koide, associate director of infectious disease research at Southern Research.

“When the immune status changes in the host, the virus could surge again,” he added. “An adaptive mutation and selection process post-infection could also contribute to successful establishment of Zika virus in a host.”

While a deeper understanding of this Zika virus rebound is needed, a possible mutation-driven secondary peak of the virus could pose new challenges for companies attempting to develop anti-viral therapeutics for post-infection treatment.

“They’ll need to study the mechanism of how the infection occurs to come up with an effective strategy for the drug,” Koide said. “Maybe it will prevent the initial viremia, but it could come back later on. They’ll need to know the drug can penetrate those tissues that may be harboring Zika virus.”

Zika virus infection exploded as a global health threat in early 2016. Since then, Southern Research has been heavily involved in the scientific community’s efforts to better understand the virus’s pathogenicity and has assumed a leadership role in providing efficacy models for evaluation of potential vaccines and anti-viral treatments.

Last year, the National Institute for Allergies and Infectious Diseases (NIAID), a division of the National Institutes of Health (NIH), contracted Southern Research to develop a non-human primate model for evaluation of candidate novel therapeutics and vaccines for protection and control of Zika virus infection.

Koide said potential vaccines are now being tested in macaques, with promising results in a proof-of-concept study that demonstrated that an immune system response had been triggered against the virus. In August, he said, efficacy studies will begin with potential new anti-viral compounds.

In addition to non-clinical research, Southern Research is now providing Phase-I clinical trial support for pharmaceutical companies that are working to develop vaccines against the Zika virus, Koide said.

While fears about Zika virus infection have somewhat faded since last summer, Koide said that it remains a threat and there is still an urgent need for both an effective vaccine and anti-viral treatments.

Last year’s outbreak of the virus in Brazil and South and Central America led to a significant increase in the number of children born with microcephaly, or an unusually small head. Cases of Guillain-Barré Syndrome and other neurological disorders were also reported.

“Vaccines are a preventative measure, which is probably the most effective strategy to fight Zika virus infection,” Koide said. “But some populations — pregnant women, the elderly, and immune-compromised individuals — may not be able to receive a vaccine and will need to rely on anti-viral drugs for protection.

“That’s important. You need both arms – vaccines and anti-viral drugs to fight the virus,” he added.

What you need to know about Zika virus transmission.

Meanwhile, Southern Research scientists are also working to completely understand the Zika virus’s ability to stage a rebound. Just how does the virus manage to survive in a host after an initial onslaught by the immune system appears to eliminate it?

To study the escape process, they’ve isolated the virus from the first acute infection phase, and later, from the secondary peak, so they can examine genetic differences between the two viral populations in order to determine if specific changes in RNA sequence might be associated with the rebound.

This kind of rebound is not seen in similar viral diseases such as Dengue fever, making Zika virus unique, Koide said.

“We just don’t know what triggers the rebound,” he added. “That is something we need to tease out because it’s RNA we’re detecting, not an infectious particle per se. Studying Zika virus’s ability to persist in immune privileged tissues (such as testes) could have important implications for non-vector mediated transmission of Zika virus.”

And while the rebound virus is eventually cleared by the macaques, Koide said revealing the Zika virus’s safe harbors is critical to evaluating whether there’s a risk that the rebound could change how the infection progresses in humans, either through enhanced transmission or potentially escalating clinical complications.