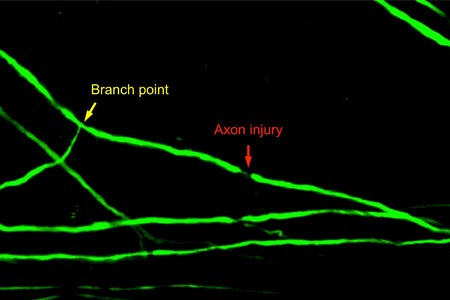 Injury to a spinal cord axon after a major branch point.

Newswise — Researchers at University of California, San Diego School of Medicine report a previously unappreciated phenomenon in which the location of injury to a neuron‚Äôs communication wire in the spinal cord ‚Äî the axon ‚Äî determines whether the neuron simply stabilizes or attempts to regenerate. The study, published April 30 by Neuron, demonstrates how advances in live-imaging techniques are revealing new insights into the body‚Äôs ability to respond to spinal cord injuries.

While the body of a neuron is small, its axon can extend far up or down the spinal cord, which is about one and half feet long in humans. Along that distance, the axon branches out to make hundreds of connections with other cells, sending out signals that allow us to sense and respond to the world around us. Unless something happens to disrupt the axon‚Äôs reach, that is. Adult human axons in the brain and spinal cord are very limited in their ability to regenerate after injury ‚Äî a hurdle that many researchers are trying to overcome in the treatment of spinal cord injuries and neurodegenerative diseases of the brain.

In this study, senior author Binhai Zheng, PhD, associate professor of neurosciences, first author Ariana O. Lorenzana, PhD, and colleagues used a sophisticated optical imaging technique that allows them to directly visualize the spinal cord in living mouse models. With this approach, the researchers were able to systematically examine the effects of axon injury location on degeneration and regeneration of the injured branch. The injury locations they compared were just before an axon‚Äôs major branch point (where a single axon branches into two) and just after it. The injuries just after the branch point cut off one branch, leaving the other intact, or cut both branches.

The researchers found that injury to the main axon, before a branch point, resulted in regeneration in 89 percent of the cases. Axons with both branches cut after a branch point regenerated in 67 percent of cases. Regeneration occurred in the form of axon elongation, branching or both for at least five days after injury. In contrast, regeneration occurred only 12 percent of cases following cuts to just one of two axon branches after a major branch point. In this case, the injured branch trims itself all the way back to the base, preserving the function of the other, uninjured branch.

‚ÄúWhat we think is happening is that if an axon is injured in such a way that it still has some kind of connection, is still transmitting signals, the neuron can justify stabilization, but not the energy it would take to either regenerate axon length or just kill the whole thing off,‚Äù Zheng said. ‚ÄúOn the other hand, once both branches of an axon are cut and there‚Äôs no longer any connection or output, the neuron can justify the energy and resources to regenerate, even though that effort is largely futile in the central nervous system of an adult mammal.‚Äù

This is a new, yet very fundamental, understanding of neuron behavior ‚Äî one that will be important to keep in mind as new therapeutic approaches are proposed for spinal cord injuries, the researchers say.

Co-authors of this study include Jae K. Lee, Matthew Mui, and Amy Chang, all of UC San Diego.