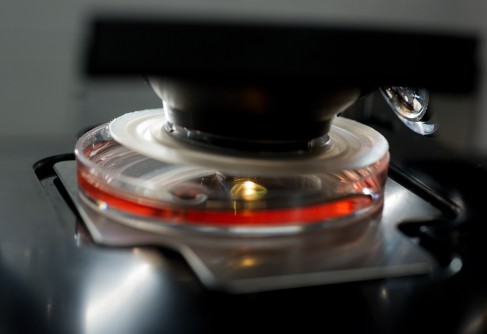 An AFM, holding a microscale cantilever, is positioned just above a petri dish filled with ovarian cancer cells. 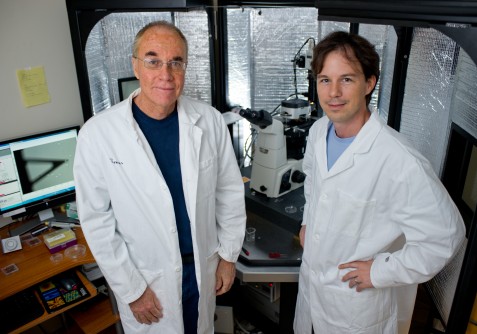 New Georgia Tech research shows that cell stiffness could be a valuable clue for doctors as they search for and treat cancerous cells before they’re able to spread. Professor John McDonald (left) and Assistant Professor Todd Sulchek led the study 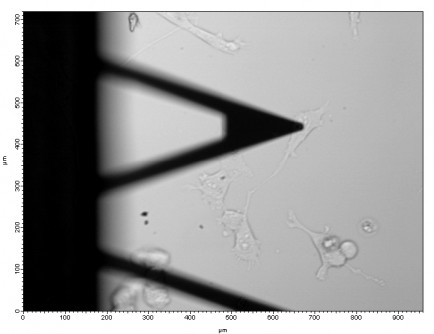 Newswise — New Georgia Tech research shows that cell stiffness could be a valuable clue for doctors as they search for and treat cancerous cells before they’re able to spread. The findings, which are published in the journal PLoS One, found that highly metastatic ovarian cancer cells are several times softer than less metastatic ovarian cancer cells.

“In order to spread, metastatic cells must push themselves into the bloodstream. As a result, they must be highly deformable and softer,” said Sulchek, a faculty member in the George W. Woodruff School of Mechanical Engineering. “Our results indicate that cell stiffness may be a useful biomarker to evaluate the relative metastatic potential of ovarian and perhaps other types of cancer cells.”

Just as previous studies on other types of epithelial cancers have indicated, Sulchek also found that cancerous ovarian cells are generally softer and display lower intrinsic variability in cell stiffnesss than non-malignant cells.

“This is a good example of the kinds of discoveries that only come about by integrating skills and knowledge from traditionally diverse fields such as molecular biology and bioengineering,” said McDonald. “Although there are a number of developing methodologies to identify circulating cancer cells in the blood and other body fluids, this technology offers the added potential to rapidly determine if these cells are highly metastatic or relatively benign.”

Sulchek and McDonald believe that, when further developed, this technology could offer a huge advantage to clinicians in the design of optimal chemotherapies, not only for ovarian cancer patients but also for patients of other types of cancer.

This project was supported in part by the National Science Foundation (NSF) (Award Number CBET-0932510). The content is solely the responsibility of the principal investigators and does not necessarily represent the official views of the NSF.