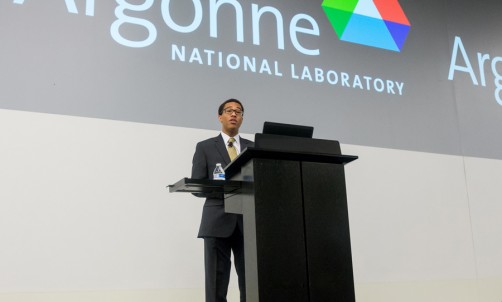 Now a sophomore at Washington University in St. Louis, Reed is studying chemical engineering and computer science, and hopes to one day create a clean energy business.

“Working with high school students like Tavis through the ACT-SO program has been an honor. The program highlights the capabilities of young African-American students and shows that if given the opportunity and an equal playing field the sky is the limit. It also allows us to recognize exceptional students like Tavis.” – Harold Gaines, president of the Argonne African-American-Employee Resource Group

The Argonne ACT-SO program, founded in 2013, provides students like Reed opportunities to conduct research and explore science and engineering careers at the Department of Energy’s (DOE) Argonne National Laboratory. Over the course of nine months, students develop research projects with help from Argonne mentors and present their findings in regional and national ACT-SO competitions.

During his sophomore year at Illinois Mathematics and Science Academy (IMSA), when DuPage County ACT-SO began a partnership with Argonne, Reed earned an ACT-SO gold medal for devising a technique that efficiently produces cellulosic ethanol. He developed the technique, now patent pending, with guidance from Argonne scientists and high school faculty members.

Reed’s technique converts plant waste to ethanol through fermentation that uses two species of bacteria. In addition to producing ethanol, the process produces solids that can be used as a food for livestock. Sarah Soltau, then a postdoctoral appointee at Argonne, helped with the science of developing the method, as did Anita White and Don Dosch of IMSA. Soltau is now a professor at Bridgewater State University in Massachusetts. Argonne guided Reed to a patent lawyer who helped him file the paperwork.

Reed’s ACT-SO experience at Argonne set the course for him to participate in Argonne’s Student Research Participation Program (SRP) when he entered college. The program provides summer research internships to undergraduate students.

“By understanding what affects lithium ion diffusion, we can build batteries with better charge and discharge rates,” said Reed, adding that he especially loved the hands-on aspect of the internship.

“Working in labs has given me a chance to learn about the scientific process and see what a scientist actually does,” Reed said. “I’ve learned to really think about what I’m doing, double-check and analyze everything.”

Reed’s experience at Argonne also left an impression on his mentors.

“Tavis was a pleasure to work with,” said Daniel Abraham, a leading battery scientist who was one of Reed’s mentors. “He was conscientious, organized and very motivated. We would give him an assignment we figured would take him two or three days and he’d be finished the next day.

“He presented a poster and talk on his summer research that were excellent. They were well-organized with logical conclusions and showed his grasp of the subject matter.”

Reed first joined ACT-SO as a high school freshman and won a gold medal for composing music for the trombone. It was a rewarding experience, he said, and wanting to help the environment, he transitioned to competing in chemistry.

Argonne has hosted many students like Reed who share a similar sense of passion, curiosity and work ethic. After their experience at the lab, these students gain an even greater appreciation for science and the confidence they need to succeed, Curry-Nkansah said.

“Working with high school students like Tavis through the ACT-SO program has been an honor,” he said. “The program highlights the capabilities of young African-American students and shows that if given the opportunity and an equal playing field the sky is the limit. It also allows us to recognize exceptional students like Tavis.”