3-May-2022 8:05 AM EDT, by University of Texas Health Science Center at Houston
favorite_border 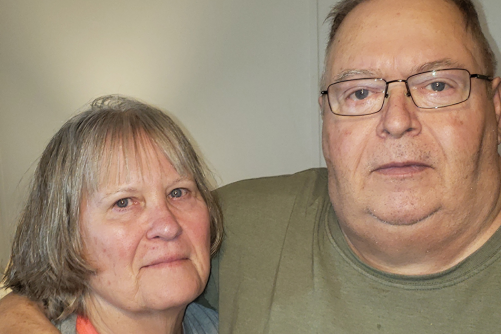 Linda Carmichael, who survived a stroke and brain injury last August, poses for a photo with K.P. Carmichael, her husband of 45 years.

Newswise — Linda Carmichael doesn’t remember much from that day in August 2021, except that she kept jiggling the seemingly airtight door of her truck to open so that she could hop out. Eventually, she pushed against the door with such force that she body-slammed against it.

The door opened, but Carmichael fell out, collapsing onto the concrete pavement of her driveway. That’s when she blacked out.

After her son called 911, Carmichael was airlifted to Memorial Hermann-Texas Medical Center by Memorial Hermann Life Flight. What happened over the next few days was largely relayed to her later by K.P., her husband of 45 years.

“My husband told me that I couldn’t raise my left leg or my left arm,” Carmichael said. “The doctors were trying to find out if I had a concussion, but ultimately they determined it was a stroke.”

Specifically, the 65-year-old had suffered a large vessel occlusion (LVO) stroke, which occurs when a large artery in the brain is blocked. Additionally, a computed tomography (CT) scan revealed that Carmichael had a significant brain injury as a result of the stroke.

The stroke and subsequent brain injury qualified her for a national, randomized clinical trial led locally by Sunil A. Sheth, MD, assistant professor of neurology and director of the vascular neurology program with McGovern Medical School at UTHealth Houston. The trial is investigating the safety and efficacy of endovascular thrombectomy plus medical management compared to medical management alone in certain LVO stroke patients.

“Endovascular stroke treatments are some of the most effective treatments we have in all of medicine. But we don’t know if they are helpful in all patients, and the trial is helping to define the population that should receive this treatment,” Sheth said. “We offered the Carmichaels the opportunity for Linda to enroll in the study, and they agreed to it.”

Carmichael was randomized into one of two groups in the single-blinded study, which means patients did not know whether they received the intervention.

For patients receiving the endovascular thrombectomy procedure, a small catheter or tube – approved by the FDA for blood clot removal in patients experiencing an acute stroke within 24 hours of symptom onset – is threaded through an artery in the leg to one side of the brain, where the device grabs the clot and removes it.

“The trial is over halfway done now, and the procedure appears to be safe in these patients,” Sheth said. “Our goal is to reduce disability after stroke and give patients the best outcomes they can have.”

By the time she woke up, Carmichael was able to raise her arm and leg. She stayed in Memorial Hermann for a week before being discharged to another facility, where she underwent physical rehabilitation, which lasted for a week.

More than eight months later, Carmichael is thriving. The Brazoria County native’s memory and motor functions have returned to normal, and she’s back to walking and talking. She is also still able to drive and care for K.P., who is on dialysis.

“Everyone I talked to was surprised by how well I recuperated so quickly,” Carmichael said. “I’m able to do everything.”