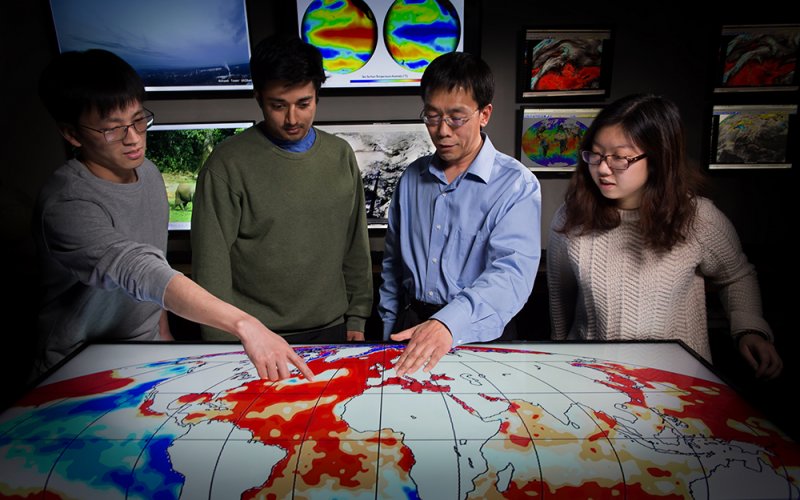 UAlbany atmospheric scientist Liming Zhou and student researchers point to a map which displays their research on the Congo rainforest. 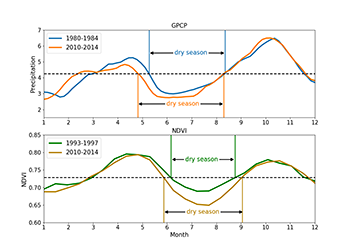 Graphic of the study's seasonal cycle precipitation estimates and normalized difference vegetation index over the Congo.

Newswise — ALBANY, N.Y. (July 1, 2019) – A recently documented long-term drying trend over the Congo Basin could have important implications on the future of the world’s second largest rainforest, according to a study published today in Nature Climate Change.

The study, led by University at Albany atmospheric scientist Liming Zhou, along with an international team of researchers, analyzed multiple independent precipitation and satellite-derived vegetation datasets to determine that the central African rainforest is experiencing a widespread, longer dry season during the boreal summer (June to August). The length has increased between 6.4 to 10.4 days per decade from 1988 to 2013.

Generally, the Congo experiences four seasons, alternating between dry and rainy throughout the year. Zhou, and his colleagues, have found that the summer dry season is beginning earlier due to long-term droughts between April and June, and ending later due to insufficiently replenished soil moisture, which postpones the start of the next wet season.

“Dry season length is one of the most crucial climate limitations for sustaining a rainforest,” said Zhou, a professor in the University’s Department of Atmospheric and Environmental Sciences (DAES). “If the lengthening dry season continues, the Congo’s evergreen forest could be substituted by drought tolerant biome such as savannas or woody grasslands favoring drier conditions.”

“On a larger scale, these changes could also accelerate global warming, as the Congo serves as a carbon sink, absorbing CO2 emissions from the atmosphere,” he added.

The Congo is home to as many as 10,000 species of tropical plants, including 30 percent that are unique to the region. Endangered wildlife, including forest elephants, chimpanzees, bonobos, and lowland and mountain gorillas can also be found in the region, as well as 400 other species of mammals, 1,000 species of birds and 700 species of fish, according to the World Wildlife Fund.

In contrast to the world’s largest rainforest, Amazonia, observations of the Congo’s climate have been relatively limited, according to Yan Jiang, the study’s lead author and a UAlbany DAES graduate student. Over the Amazon, a longer dry season has also been observed. Three major short-term droughts, in 2005, 2010 and 2016, caused decreases in the region’s water level and forest photosynthetic capacity.

“It is amazing to observe similar changes in dry season over the Congo and Amazon. We hypothesize that there may be some connection, for precipitation in these regions are all sensitive to large-scale atmospheric circulation changes and tropical sea surface temperature (SST) variations,” Jiang said. “However, this needs to be further studied and verified.”

Zhou and his colleagues have published a series of research articles related to the Congo. In 2014, the team documented a long-term drought and observed an extensive decline in satellite-detected vegetation  greenness and canopy water content in the rainforest. In 2016, they linked the long-term drought to tropical SST variations over the Indo-Pacific associated with the enhanced and westward-extended tropical Walker circulation (the large-scale atmospheric east-west equatorial circulation).

The team next will shift focus to better understand the physical mechanisms behind the Congo’s drought and rainfall seasonality changes, and determine whether such changes could be attributed to human activity and/or natural causes.

“The Congo rainforest is full of puzzles that still need to be solved,” said Ajay Raghavendra, a UAlbany DAES graduate student and co-author on the study. “For instance, we have intriguingly also found an intensification of thunderstorms over the region coinciding with the drying trend. We’ve also documented changes in tropical waves associated with precipitation variations over this region.”

When asked about the attribution of the drought to man-made global warming, Zhou warned, “While this long-term drought is certainly a consequence of climate change, it is premature to attribute these changes to anthropogenic sources at this time. We plan to conduct more research in the near future.”

The study is funded by the National Science Foundation. Other researchers include Compton Tucker and Joanna Joiner at the NASA Goddard Space Flight Center, Yi Y. Liu at Nanjing University of Information Science & Technology (NUIST) in China, and Wenjian Hua, a former UAlbany postdoctoral fellow, now at NUIST.

Caption: UAlbany atmospheric scientist Liming Zhou and student researchers point to a map which displays their research on the Congo rainforest.