Results suggest that schools should foster a 'growth mindset' of mathematical ability to encourage more girls to opt for majors in the physical sciences, engineering, mathematics or computer science 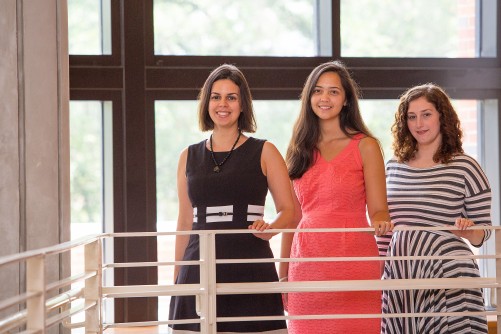 Newswise — TALLAHASSEE, Fla. — The belief that the ability to do difficult mathematics is something that you either have or you don't prevents many American girls from pursuing a college degree in the physical sciences, engineering, mathematics, or computer science (PEMC), suggests a new study by Florida State University researchers.

In short, schools, families and policy makers need to do more to change those misperceptions.

“Our results indicate the potential for more women to move into PEMC if they perceive their mathematics ability as strong and open to growth,” said Lara Perez-Felkner, assistant professor of higher education and sociology in the College of Education at Florida State and co-author of the study.

It’s been well documented that math-based fields in higher education and at the professional level are male-dominated. Perez-Felkner and doctoral students Samantha Nix and Kirby Thomas set out to determine how much a student’s choice of a college major is influenced by gender and perceptions about ability.

The results were revealing.

Perceived ability in mathematics matters, in particular on difficult and challenging tasks. While high school boys tend to overrate their abilities in mathematics, girls tend to underrate them. They also found 12th grade girls who reported being convinced that they could do the most difficult and challenging mathematics were about two times more likely to select a PEMC major. Another important conclusion was the perception that mathematical ability can be developed through learning — or a “growth mindset.” Girls in 10th grade who reported that they felt confident about this were more than two times more likely to take a PEMC major.

The findings held true even after correcting for other factors such as the science courses they took at high school, ethnicity, college entrance exam scores and the selectivity of the college.

“By focusing on student’s perceived ability under challenge, we are getting closer to the ‘real’ world context, where mathematics anxiety may operate,” Perez-Felkner said. “Most people believe they can do some mathematics, such as splitting a dinner bill with friends, but fewer believe they can do mathematics they perceive as ‘difficult.’ The research shows that this belief can influence the decision to specialize in mathematics-intensive fields, for both women and men.”

To conduct the U.S. National Science Foundation-funded study, researchers examined a group of 4,451 students from 752 high schools across the United States and followed them from 2002 to 2012 using the records of the Education Longitudinal Study of the U.S. National Center for Education Statistics.

These findings, published in the journal Frontiers in Psychology, have direct implications for policy.

They suggest that interventions that foster a growth mindset of mathematical ability could be effective in raising the number of women that pursue a career in PEMC fields.

Currently, women are strongly underrepresented in these fields, as shown by recent reports by the Organisation for Economic Co-operation and Development and the U.S. National Science Foundation.

This gender gap is bad news for everyone: Science and society lose talent, while women miss out on potential careers with higher-than-average income and job stability.

“It is important for the U.S. and other nations to continue to invest in interventions to end gender segregation in PEMC sciences,” Nix said. “For instance, students may need to hear that encountering difficulty during classwork is expected and normal and does not diminish their ability to become a successful scientist. In addition, instructors may want to ask themselves if they are giving the same feedback to young women and men who deal successfully with a difficult mathematics problem in class.”

• Women were almost four times less likely to major in PEMC than their male peers.

• Women were almost four times more likely to major in health science than their male peers.

• As a group, girls in 10th grade scored significantly lower than boys on an index that estimated their growth mindset of mathematics ability.

• As a group, 10th and 12th grade girls believed less in their ability to do difficult math than boys of the same age.