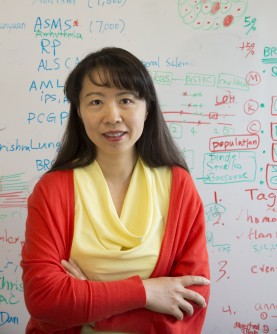 According to new research by Li Ding, PhD, and colleagues at Washington University School of Medicine in St. Louis, one in five women with ovarian cancer has inherited genetic mutations that increase the risk of the disease.

Newswise — A new study conservatively estimates that one in five women with ovarian cancer has inherited genetic mutations that increase the risk of the disease, according to research at Washington University School of Medicine in St. Louis.

Most women in the study would have been unaware of a genetic predisposition to ovarian cancer because they didn’t have strong family histories that suggested it.

The research, published Jan. 22 in Nature Communications, is the first large-scale analysis of the combined contributions of inherited and acquired mutations in a major cancer type. The inherited mutations by themselves are unlikely to cause ovarian cancer but may conspire with other genetic changes acquired over a woman’s lifetime to tip the balance toward cancer, the researchers said.

“Using advanced genomic analysis, we found that 20 percent of women with ovarian cancer had inherited mutations in a gene pathway known to be important in inherited breast and ovarian cancer. That number seems pretty high,” explained senior author Li Ding, PhD, assistant director at The Genome Institute at the School of Medicine and a research member of Siteman Cancer Center. “This tells us that we need to find better ways to screen women for ovarian cancer, even if they don’t have family histories of the disease.”

Ovarian cancer strikes an estimated 22,000 women annually. Its symptoms are nonspecific and include bloating, pelvic pain and frequently feeling the need to urinate. Most women aren’t diagnosed until the cancer has spread, leading to a poor five-year survival rate of 43 percent.

Women with ovarian cancer in the study did not have known family histories of breast or ovarian cancer or rare cancer syndromes, all of which can increase the odds of developing ovarian tumors. The women ranged in age from 26 to 89, and 90 percent were Caucasian.

The researchers, including Washington University first authors Krishna Kanchi, Kimberly Johnson, PhD, and Charles Lu, PhD, performed a genetic analysis of each woman’s tumor and her own DNA, taken from a skin sample. By comparing the genetic sequences side-by-side, they identified the acquired mutations in individual tumor samples. In addition, by comparing the patients’ DNA samples with the DNA of 557 women who did not have ovarian cancer and served as controls, the researchers found inherited mutations.

The inherited mutations identified as part of the study involved major genetic changes where large chunks of the protein-coding sequences were truncated, or shortened, disrupting the function of key proteins such as those that normally keep cell division in check or repair mistakes in DNA. The scientists also are working to develop new experimental approaches to verify or rule out whether other, smaller inherited genetic changes they discovered also are linked to the development of ovarian cancer.

Twenty percent of women with ovarian cancer in the study had inherited mutations in a critical pathway of genes associated with Fanconi anemia, a rare, hereditary bone marrow disease. Genes in this pathway are involved in DNA repair and have been linked to certain cancers, including breast and ovarian tumors.

Surprisingly, the researchers found that 37 percent of women with ovarian cancer had either inherited or acquired mutations in the Fanconi anemia pathway, a very high number that indicates its significant role in the development of the disease, Ding said. Women with inherited mutations in this pathway also were more likely to be diagnosed with ovarian cancer at a younger age, the research shows.

A lot of cancer genomics has focused either on inherited mutations or on those acquired during a person’s lifetime, called somatic mutations. However, research that involves sequencing both tumor and normal samples from the same patients, like in this study, gives scientists the opportunity to integrate genetic data to see how inherited and somatic mutations cooperate to cause cancer.

“We’re now able to obtain a fuller picture of the way cancer develops in a particular patient,” Ding said. “More studies are needed, but our findings could have important implications for developing better screening strategies for ovarian cancer and improving early detection.”