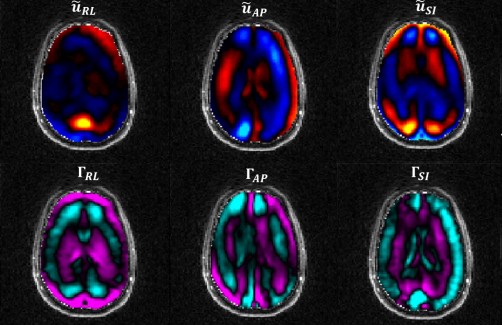 Engineers at Washington University in St. Louis are taking a closer look at the brain's "suspension system" to test just how effective it is in helping protect against traumatic brain injury, or TBI. The top row of images shows displacement of brain tissue as observed in the new research; the bottom row shows "curl," or change in shape.

Newswise — Traumatic brain injury, or TBI, can be devastating and debilitating. Despite intense interest and years of study, the exact mechanisms linking force and neurological injury remain unclear. Researchers know that the membranes separating the skull from the brain play a key role in absorbing shock and preventing damage caused during a head impact, but the details remain largely mysterious.

New research from a team of engineers at Washington University in St. Louis takes a closer look at this “suspension system” and the insight it could provide to limit or perhaps prevent TBI.

“The idea was to find out how protective are the layers of membranes that connect the brain to the skull,” said Philip Bayly, the Lilyan & E. Lisle Hughes Professor of Mechanical Engineering and chair of the Mechanical Engineering & Materials Science Department at the School of Engineering & Applied Science. “They serve the same function as the suspension in your car. When you go over a bump in a car, there’s a big oscillation of the wheels but you get very little motion in your body because the suspension absorbs it.

“We know that the membranes are there to cushion the brain, but by how much, and what’s the variation from person to person?”

During the study, researchers used an imaging technique called magnetic resonance elastography, or MRE, on six volunteers. During MRE, tiny skull vibrations are introduced through a vibrating pillow and measured with sensors embedded in a mouthguard. The motion of the brain was then measured via magnetic resonance imaging. When compared to a gelatin model that showed significant force transfer, the six subjects’ skull-brain interface significantly delayed and weakened the transfer of motion from skull to brain.

“We’re putting numbers to it, quantifying how much protection is actually there,” Bayly said. “During our study, 90 percent of the motion to the brain was attenuated.”

The next steps: eliminating the need for the mouthguard-sensor system and developing a more streamlined MRE method, which could enable a larger study with many more subjects.

“This would allow us to examine factors such as age or gender as variables when it comes to traumatic brain injury, and see who might be more susceptible to such injuries,” Bayly said.

The research was recently accepted by the Journal of Biomechanical Engineering, and is now available online.