Survey findings show strong consensus for policy initiatives and safe firearm storage among 11,147 members of the American College of Surgeons

Survey findings show strong consensus for policy initiatives and safe firearm storage among 11,147 members of the American College of Surgeons. 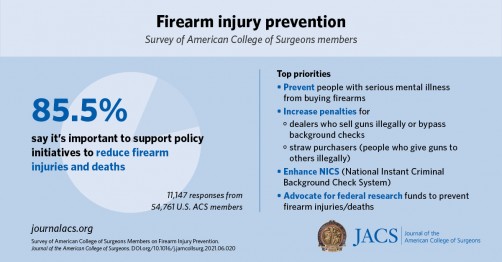 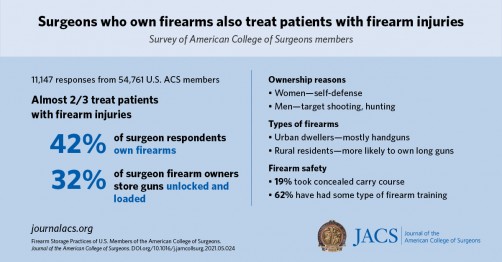 Firearm Storage Practice of US Members of the American College of Surgeons.

Newswise — CHICAGO (July 22, 2021): In what may be the largest survey of physician attitudes about firearms and how firearm-owning surgeons store guns in their homes, U.S. members of the American College of Surgeons (ACS) said they support the organization taking an active role in advocating for policies and programs designed to lower the risk of firearm-related injuries and deaths. The advocacy initiatives they support include preventing people with serious mental illness from buying firearms and cracking down on illegal firearms sales.

Results from the survey of 54,761 U.S. ACS members, of whom 11,147 responded, have been published as two articles on the website of the Journal of the American College of Surgeons (JACS) in advance of print.

One article reported broad support among members, ranging from medical students to retired surgeons, for a number of initiatives to reduce firearm injuries. More than 60 percent of surveyed members said they treat firearms injuries, and almost three-quarters “support the ACS being right at the frontline of solving this issue,” said lead study author Deborah A. Kuhls, MD, FACS, interim assistant dean for research and professor of surgery at the Kirk Kerkorian School of Medicine at the University of Nevada Las Vegas. That is, survey respondents said it’s very or extremely important for the organization to support policies to lower the incidence of firearm injury.

The second article analyzed survey data on the subset of ACS members who own firearms (42 percent), their reasons for firearm ownership, and how they store their guns (61 percent of whom lock them up) and ammunition. Those habits compare favorably to what smaller surveys have found about storage habits of gun owners in the broader population. A 2015 survey of 3,949 adults in households with children found that only 30 percent store firearms unloaded and locked.1 A more recent online survey of 1,444 firearm owners found that only 46 percent safely store all of their firearms.2

“What’s really important about the work that came out of this survey is that it provided data that speak for most of the membership of the ACS,” said Brendan T. Campbell, MD, MPH, FACS, lead author of the study on firearm storage habits and a pediatric surgeon at Connecticut Children’s in Hartford. “It really helps the ACS speak with a unified voice on this sometimes contentious issue.”

The ACS Committee on Trauma (COT) commissioned the survey to get a clearer idea of members’ attitudes and behaviors about firearms and preventing firearm injuries. More than 20 percent of the ACS membership completed the survey. The authors stated this is the largest survey of American physicians related to firearms ownership and storage practices.

“The objective of this study was not to say firearms are good, firearms are bad, or this is exactly what the ACS should do, but rather to understand clearly what ACS members think can and should be done to make firearm ownership as safe as possible,” Dr. Campbell added.

Among ACS members who own firearms, 82 percent own long guns, 82 percent own handguns, and 32 percent own high-capacity magazine-fed semi-automatic rifles (totals exceed 100 percent because many respondents own more than one type of firearm). Study results also ascertained why they own firearms: 75 percent say for self-defense and 73 percent for target practice.

“There’s a real opportunity for surgeons to promote safe firearm storage and responsible firearm ownership,” said Dr. Campbell, who is a firearm owner and Chair of the Injury Prevention and Control Committee of the ACS COT. He credited Ronald M. Stewart, MD, FACS, Medical Director of ACS Trauma Programs, and ACS COT Chair Eileen M. Bulger, MD, FACS, with wanting to engage firearm owners in this effort. “Who better than the surgeons who care for the victims of gun violence in this country to be the leaders in its prevention?” Dr. Campbell said.

Respondents were also asked to rate their support on a scale of 1 to 5 for 25 possible advocacy/policy initiatives, with 85.5 percent indicating that it’s important to support policy  initiatives to reduce firearm injuries and deaths. Receiving the highest scores—4.4 or higher—were preventing people with mental illness from purchasing firearms; increasing penalties for dealers who sell guns illegally or bypass background checks and for straw purchasers (people who give guns to others illegally); enhancing the National Instant Criminal Background Check System (NICS); and using NICS for mandatory background for all gun purchases from authorized dealers.

“The results were really overwhelmingly in support that the ACS should play a role in decreasing firearm injuries and deaths,” Dr. Kuhls said. “There was broad support that this is a public health problem and that the ACS should be leading and joining other organizations in addressing this very unfortunate cause of injuries and death in the United States.”

Sixteen suggested initiatives carried a score of 4 or above, which was considered very important. But there wasn’t such strong consensus on the other nine initiatives, such as increasing interstate reciprocity on concealed carry permits and allowing teachers and staff to carry concealed weapons in schools scored at the bottom. Nor was there strong consensus on limiting firearm ownership to people age 21 and over.

“There is uniformity that this is a huge public health problem, we need to do something about it, and we need to be sure that the people who own firearms can be responsible owners,” Dr. Kuhls said. “It’s even stronger in certain ethnic backgrounds for which we didn’t have an adequate sample in our previous work.”

Dr. Kuhls added, “Some of the results really speak for all members regardless of age and regardless of where they practice, whether they own firearms or not, regardless of what demographic group they represent. I think that’s part of the real power of this study.”

Coauthors of the prevention article with Dr. Kuhls were Drs. Campbell, Bulger and Stewart, along with Arielle Thomas, MD, MPH, and Holly Michaels, MPH, both with the ACS COT. Preliminary findings were presented at the American College of Surgeons Annual Clinical Congress, San Francisco, CA, October 2019.

Coauthors of the firearm storage article with Dr. Campbell were Drs. Kuhls, Bulger and Stewart, and Cynthia L. Talley, MD, FACS, of the Medical University of South Carolina, Department of Surgery, in Charleston. Preliminary findings were presented at the 78th Annual Meeting of the American Association for the Surgery of Trauma which was held virtually in September 2020.

The authors have no financial relationships to disclose.

About the American College of Surgeons
The American College of Surgeons is a scientific and educational organization of surgeons that was founded in 1913 to raise the standards of surgical practice and improve the quality of care for all surgical patients. The College is dedicated to the ethical and competent practice of surgery. Its achievements have significantly influenced the course of scientific surgery in America and have established it as an important advocate for all surgical patients. The College has more than 82,000 members and is the largest organization of surgeons in the world.  For more information, visit www.facs.org.

Journal of the American College of Surgeons (JACS)