12-May-2014 11:00 AM EDT, by Michigan Medicine - University of Michigan contact patient services
favorite_border 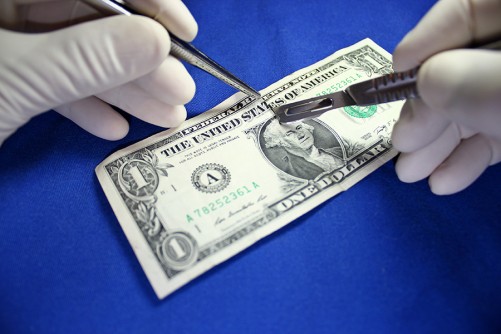 The in-depth analysis found wide variation in many aspects of surgery depending on a patient's insurance source.

Newswise — ANN ARBOR, Mich. — Surgery patients covered by Medicaid come into their operations with worse health, do worse afterward, stay in the hospital longer and find themselves back in the hospital more often than those covered by private insurance, a new analysis by University of Michigan Medical School researchers finds.

In fact, people with Medicaid coverage were twice as likely as other patients to have certain health risk factors before they had surgery, the researchers report in JAMA Surgery. They also had many more emergency operations, experienced two-thirds more complications after surgery, and used 50 percent more hospital resources than patients with other kinds of insurance.

The results come from an analysis of data from patients who had surgery over a one-year period in 52 Michigan hospitals taking part in the Michigan Surgical Quality Collaborative.

The findings may help foretell the near future, as millions of uninsured people become eligible to enroll in Medicaid programs that 26 U.S. states have expanded under the Affordable Care Act. Past studies suggest that many of the newly covered may use their new coverage to get treated for conditions that went untreated while they were uninsured – including having surgery.

Since hospitals often don’t recoup the total cost of caring for people covered by Medicaid, the findings also have implications for how hospitals will fare financially in coming years.

The authors say their results carry special importance for hospitals that treat large numbers of Medicaid patients -- and currently receive additional payments from the federal government to help cover more of the cost of their care. Those payments are scheduled to decline over time under the ACA.

The study-analyzed data from a random sampling of all operations performed at the participating hospitals in one year, focusing on nearly 14,000 patients between the ages of 18 and 64 who had either private insurance or Medicaid. Patients who also had Medicare coverage, or who had no insurance, weren’t included.

“If we make the presumption that the new Medicaid-covered patients will fit the mold of what we see now, surgical and inpatient teams must be prepared to provide the care and support they need,” says Seth Waits, M.D., a U-M surgical resident who led the analysis. “Financially, it may be a double whammy for hospitals, especially those that have the highest percentage of their surgical population covered by Medicaid.”

The authors were surprised by the wide variation between hospitals in the proportion of their surgical cases that were Medicaid-covered patients. More than 61 percent of all operations on people with Medicaid coverage were done at just 20 of the 52 hospitals.

Although the Medicaid patients were on average younger, they were twice as likely to smoke, and had higher rates of conditions that can arise from years of poor health habits and make surgery riskier, including diabetes, lung disease and blockages in their blood vessels.

In the first month after their operations, they had higher rates of complications, and were more than twice as likely to die, than those with private insurance. They needed an average of one more night in the hospital, and were more likely to need to return to the hospital after going home from surgery.

Waits conducted the study with Darrell Campbell, Jr., M.D., who directs the MSQC and is a surgeon and U-M Health System chief medical officer, and Michael Englesbe, M.D., the MSQC’s associate director.

For nearly a decade, the MSQC has used funding from Blue Cross Blue Shield of Michigan to bring together surgical teams from hospitals across Michigan to collect, pool and analyze a wide range of information about surgical care.

The effort has allowed the hospitals to spot opportunities to improve care, and yielded important research findings that could help make surgical care across the U.S. better and safer. More hospitals have joined MSQC in recent years, and it now includes most major hospitals around the state.

In 2012, the collaborative added insurance status to the list of items it tracks, and the new study uses data collected between July 2012 and June 2013. In April 2014, Michigan’s Medicaid system expanded with the addition of the Healthy Michigan Plan for any adult making up to 133 percent of the poverty level.

“As we enter a new era under expanded Medicaid, we’ll continue to use MSQC methods to track how the newly covered are doing, and what we can do to prevent unnecessary complications, readmissions to hospitals and other issue,” says Campbell. “We can already see that surgical teams must partner with non-surgical teams to ensure patients get the full range of care and support they need both before and after an operation.”

Campbell and Englesbe are a professor and associate professor, respectively, in the U-M Medical School’s Department of Surgery. Both are members of the U-M Institute for Healthcare Policy & Innovation.