FiberTectTM was conceived for military applications but has since expanded into oil spills and, now, animal operations. 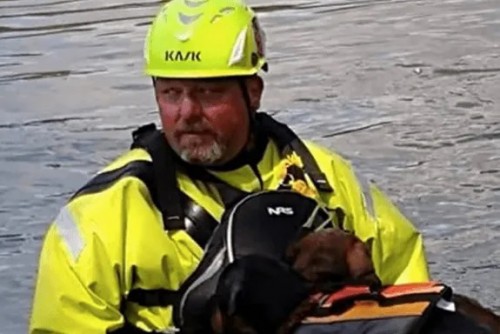 Credit: This 100-pound tortoise, named Tiny, was cleaned during a training exercise at the Rescue Ranch in North Carolina. The FiberTect material is visible under the animal.

Credit: This goat was cleaned during a training exercise at the Rescue Ranch in North Carolina. The FiberTect material is visible under the animal. 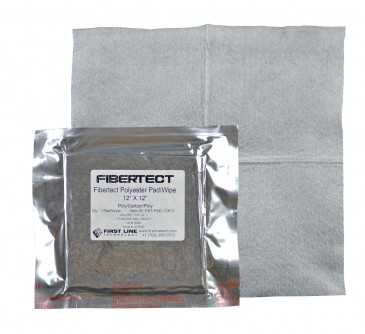 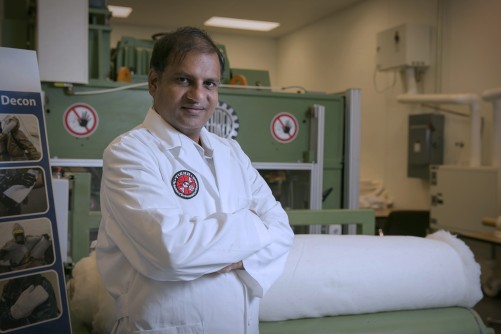 Newswise — Anyone with a dog knows what happens when the animal gets wet: the big shake that throws water all over everyone and everything nearby. But what happens if the dog is covered in something more hazardous than water?

It also gets thrown all over everyone and everything nearby.

Two years ago, Brett Huff, an animal decontamination specialist, was looking for a better solution than the diluted-dish-soap-and-water method he was using to clean animals. It was messy, distressing to the animals – even in warm weather, let alone the freezing temperatures of winter – and, when it was all over, he had a huge amount of contaminated water to dispose of, which had to be done safely.

That’s when a member of the U.S. Army’s Special Forces asked if he’d heard of FiberTectTM.

Invented by Texas Tech University professor Seshadri Ramkumar, FiberTectTM was conceived in 2005 as a low-cost decontamination wipe for the U.S. military that could absorb and neutralize the gases and liquids used in chemical warfare. Then, after the Deepwater Horizon oil spill in 2010, the material was re-engineered to safely clean up the oil.

That was an eye-opener for Huff, because oil is one of the products he often sees in his work. An Army veteran as well as a 30-year veteran of the security, environmental, training and rescue fields, Huff is a technical rescue specialist and instructor for Code 3, a leader in emergency response product design, and Animal Search and Rescue, a technical rescue team that specializes in animals. He’s also the owner of Animal Decon, a training, planning and disaster response resource for working and service animals as well as household pets, zoo or exotic animals, wildlife and livestock.

“Anytime there’s a flood, or any major rain event, anything in a household can be put into the storm drains,” Huff explained. “Animals are constantly getting themselves in a situation in flooded waters and industrial agricultural chemicals, sewage ponds – there’s a lot of things they can get into. So, a FiberTectTM wipe would be really good to keep with you to wipe them down.

“The problem is, especially in a mass casualty event, we’re looking at the possibility of secondary contamination, because they can spread that hazardous material. So, anything we can do to reduce that contaminant on the animal as the owner brings it in, or before we get to the decontamination station – where there are other people and animals – would be huge and a great benefit to anybody doing a decontamination operation.”

Of course, a sufficiently quick response to reduce secondary contamination requires having FiberTectTM on hand before you need it.

“As with all decontamination, speed is key,” said Corey Collings, a training, research and development specialist with First Line Technology, which markets the product. “FiberTectTM can be immediately deployed to animal owners to easily decontaminate their own service animals, working dogs or companion pets. Because FiberTectTM is intrinsically safe and intuitive to use, it requires no prior training to effectively perform bulk decontamination. Most critically, this frees up valuable trained personnel to set up and operate follow-on technical decontamination lines.”

Since his introduction to FiberTectTM two years ago, Huff has become one of its most ardent advocates. He gives training presentations across the country to various disaster response groups and, by his estimates, he taught about 5,000 people in the last two years. Not only does he include FiberTectTM in his presentations, he carries it in his decontamination bag at all times.

That’s because the options for its uses abound. Huff has personally used FiberTectTM on horses, goats and even a 100-pound tortoise.

He has been working with Louisiana and Mississippi’s state governments to develop response and training plans for decontaminating people after a mass casualty event, be it the fallout from a power plant, a dirty bomb or a full nuclear strike. Animals, he emphasized, must be part of those plans.

Huff is even looking at applications to decontaminate police dogs after Fentanyl raids.

“The use of FiberTectTM has expanded from just being a wipe designed for the decontamination of chemical warfare agents,” said Amit Kapoor, president and CEO of First Line Technology. “With its flexible design, FiberTectTM is made in large format pads, perforated rolls and sewn into mitts allowing for a growing list of uses. We continue to find new uses with additional testing and research conducted by First Line Technology as well as end users in the first responder and military community.”

While there are other products available for decontamination, Huff said FiberTectTM  has clear advantages.

“There are a lot of products out there – cotton towels, fiber towels, other industrial, absorbent wipes – but not with the ability this product has,” he said. “They do not catch the off gasses and do not have the ability to hold chemicals into the product. So that’s why I went to FiberTectTM – for the containment, because it’s easier to dispose of, it was more compact and it was a known, proven product.”

Its longevity adds to that proven quality, its inventor said. After being commercialized through Texas Tech, FiberTectTM has been manufactured since 2005 by Hobbs Bonded Fibers, a Waco-based company founded by Carey Hobbs, a university alumnus and regent for the Texas Tech University System.

“FiberTectTM is an innovation story, showing that this platform technology can lend itself to multiple applications, be it saving the lives of warfighters and first responders, protecting the environment from toxic chemical and vapors, and now protecting and taking care of pets and animals,” Ramkumar said. “With COVID-19, there is renewed importance in manufacturing, and fields like nonwovens and technical textiles that have lent themselves to products like FiberTectTM will play a key role in next phase of research and manufacturing.”