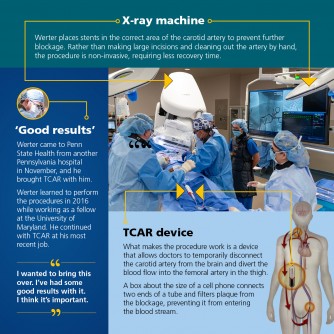 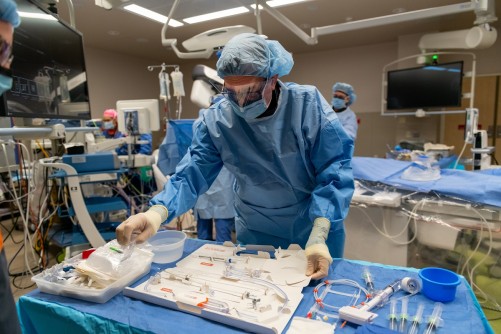 Newswise — They call heart disease a silent killer, and it doesn’t get much more silent than carotid stenosis.

Two large arteries on both sides of the neck ferry oxygen-rich blood to the brain. When they begin to close because of a build-up of plaque in the blood, a patient might not notice anything. But when the flow stops or some of the plaque travels to the brain, the result is a stroke.

Until about seven years ago, people with carotid stenosis had two options. Medications to lessen cholesterol and the fatty deposits in blood might control the closure. Or, in cases where the artery is blocked by 80% or more, surgery is recommended. A recently developed, third, minimally invasive option — Transcarotid Artery Revascularization (TCAR) — can help some patients.

For symptomatic people, surgery is usually a given.

That surgery is not without risk. It involves opening the artery and cleaning out the plaque, and patients can run the risk of an in-surgery stroke. In fact, the riskiness of surgery, coupled with the relatively meager results – nearly as many patients who have had surgery go on to suffer strokes as those who haven’t – have led some cardiovascular surgeons to debate whether the practice is warranted in asymptomatic patients at all, Werter said.

TCAR, however, doesn’t involve surgery. The procedure protects the brain by rerouting blood from the carotid artery to the femoral artery in the thigh, allowing doctors to insert stents into the artery in the neck. On April 27, Werter performed St. Joseph Medical Center’s second TCAR procedure. It took about an hour.

The procedure isn’t for everyone. At the moment, only patients who aren’t healthy enough for surgery or are otherwise prevented from having it can be candidates for TCAR. As the numbers and statistics continue to show its effectiveness, that could change.

“People should be sure about what all the options are,” Werter said. “Make sure that they’re informed about alternatives and what options are available, whether it’s medicine or surgical procedures. Make sure you’re somewhere where they can treat something in multiple ways. So, when you have options, you can pick and choose what you think the right thing is.”

See the attached graphic for some facts about the TCAR procedure at St. Joseph Medical Center.