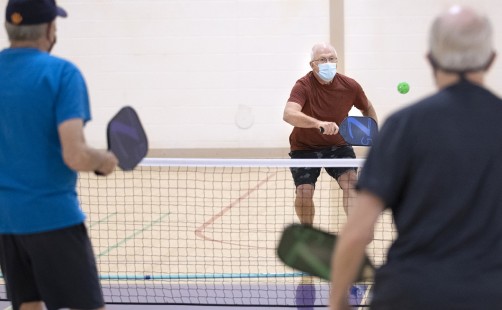 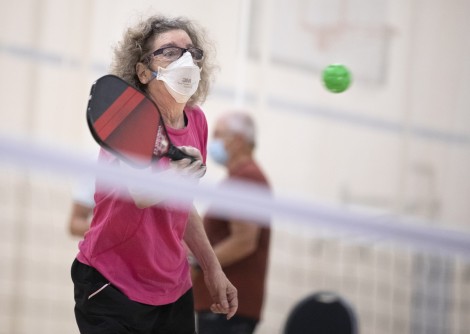 Pam Davis swats at the ball during a game of pickleball at the University Fitness Center at Penn State Health Milton S. Hershey Medical Center.

Newswise — It’s just after 8 a.m. at the University Fitness Center on the Penn State Health Milton S. Hershey Medical Center campus, and a familiar thock-thock-thock sound is coming from the basketball court.

It’s pickleball time, and already a handful of players have started on the square of hardwood that forms the boundaries of the playing surface.

A pickleball court is smaller than the closest of its three ancestors – tennis. Pickleball also uses paddles that look more like the kind they use in ping-pong instead of tennis racquets. Oh, and the game’s designers have also added Wiffle ball to the mix just for good measure. Players smack around a hard plastic sphere instead of a fuzzy tennis ball.

In the U.S., 4.8 million people play this Frankenstein monster of a game, according to a 2022 report from the Sports and Fitness Industry Association. That’s an increase of more than a million pickleball players in just four years. An article in the July 18 edition of The New Yorker magazine called it “America’s fastest growing sport” and it’s not the first publication to make the claim.

Despite the goofy name and quirks, proponents say pickleball offers the health benefits of other physical activity previously considered out of bounds for older players ― sports like tennis. Studies point to possible cognitive gains to be had from pickleball. And Mike Zehner, a clinical exercise physiologist at Penn State Heart and Vascular Institute, says a game like pickleball can make all the difference in a person’s cardiovascular and mental well-being.

Cardiovascular activity like pickleball “works to help dilate your blood vessels, and this effect can last up to two hours after exercise has ended,” Zehner said. “So, it helps with hypertension, strengthens your immune system, supports mental health, helps regulate blood sugar, helps you sleep and the list goes on. There is also a believed link that exercise can decrease the chance of early onset dementia and Alzheimer’s.”

Central Pennsylvania is not immune to the pickleball bug. Courts are popping up everywhere ― indoors and outdoors, on tennis courts and in driveways. The University Fitness Center offers occasional clinics for people hoping to learn, and there’s no shortage of local venues that consider the sport worth saving space for.

Bored with the bike?

In return, some ardent pickleballers say the sport is saving them. Among the morning crew at the University Fitness Center is a trim, silver-haired man named Chuck Zerbe. Fifteen years ago, a doctor at Penn State Health Medical Group ― Nyes Road told him his left anterior descending artery had occluded by 95%. A Penn State Heart and Vascular Institute physician installed stents, and the same doctor urged him to get to the gym. Zerbe started riding stationary bikes and hoofing it on treadmills, because he assumed he had to. “I got pretty tired of riding that bike,” he said.

His son took up the game and suggested Zerbe give it a try. So one day, he popped his head into one of the morning pickleball matches at the Fitness Center and asked what it was all about. He played three games on a borrowed racquet that day and lost. But he was hooked. Now, Zerbe finds himself in games on outside courts in the summer, inside in the cold, at home or when traveling.

“It’s great exercise,” he said. “It’s a lot more fun than going in there and being on a treadmill or riding a bike.” He credits it with helping him keep his weight down.

How do you play?

You play it like tennis. Often the game is played as doubles, but singles can play too. You knock the ball across the net and try to bounce inside the boundaries of the court and out of reach of the other players’ paddles. A squat rectangle next to the net is called the kitchen. Players must stay out of the kitchen unless they’re chasing after a ball, and they must jump out again immediately.

Therein lies its universal appeal. It’s a blast to play, and there’s less ground to cover chasing the ball.

Is it right for me?

Despite its universality, as with any sport, un-jar your inner pickleballer with caution.

“It is really all based on their medical history and also their present activity level,” Zehner said. “If someone hasn’t been exercising it is always good to speak with their family doctor first and ask their opinion. They also need to look at their activity and if they would be able to perform that task.”

Does it help your brain?

It’s gentler than some sports, but it's still fast. “It helps your reflexes,” said Pam Davis of Hershey, another of the morning crew at the fitness center. A 2021 study by the National Institutes of Health showed evidence of improved cognitive performance among people who played pickleball for six weeks.

Even without the fast-moving plastic ball, the running, jumping and lunging helps brain function, Zehner said. “Cardiovascular exercise is extremely important in brain activity and brain health,” he said.

The social nature of pickleball also helps, he added.

“Not only does it increase blood flow to the brain giving it more oxygen and nutrients,” Zehner said, “but these individuals are more likely to be around others that will increase their quality of life and mental well-being.”

That’s Davis’ favorite part. She’s been playing since 2016 and makes rounds to different courts throughout the Hershey area. There, she’s made plenty of friends, she says.

It’s also portable. Pickleball has become so popular, even when you’re on the road, it’s easy to find a game. Florida is the serious pickleballer’s promised land, where big tournaments happen among skilled players of all levels and age groups

Zerbe says the sport has changed his life. “I must have 200 friends from pickleball,” he said. He owns a condo in Cape May, N.J., and before pickleball, he and his wife hadn’t found many friends in the neighborhood. Then someone installed two pickleball courts nearby.

“The nice thing about pickleball is that unlike tennis and unlike golf, it’s open play,” Zerbe said. “Anywhere you see a court, people can come in that we don’t even know, and then as soon as we’re done with our game ― they’re next.”