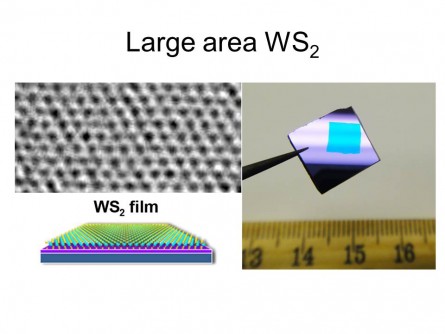 Crystalline large area WS2 have been grown directly on SiO2/Si substrates. The top left panel exhibits a high resolution transmission electron microscopy (HRTEM) image of the edge of a single-layer WS2 film. The top left panel depicts a schematic representation of the as grown WS2 film. A photograph of a WS2 film transferred onto a substrate is shown on the right panel, exhibiting the high contrast of the WS2 over SiO2/Si (films are cyan in color).

Newswise — Through the National Science Foundation’s Emerging Frontiers in Research and Innovation (EFRI) program, Penn State has been awarded $4 million over the next four years to lead two teams of investigators and support members of a third team in the new field of 2D crystals and layered materials.

A material that is only a single atomic-layer thick can have completely different properties than its bulk counterpart. A new field of nanoscale science and engineering is emerging to study the wide variety of two-dimensional materials and what happens when they are stacked one on top of the other. Potential applications include energy harvesting and storage, sensing, electronics and photonics, and bioengineering. “There is a lot of interest in 2D materials beyond graphene, especially when considering stacking to form heterostructures because they can lead to phenomenal properties,” said Joshua Robinson, Corning Faculty Fellow of Materials Science and Engineering and associate director of Penn State’s Center for Two-dimensional and Layered Materials (2DLM). “I think we have a variety of excellent ideas in these novel materials, which is why we did so well with the EFRI.” The EFRI awards fund interdisciplinary teams of researchers in rapidly advancing fields of fundamental engineering research. The 2014 awards, called 2-DARE, for Two-dimensional Atomic-layer Research and Engineering, were awarded to nine teams in the U.S., three of which include Penn State researchers. • “2D Crystal Formed by Activated Atomic Layer Deposition” is led by Joan Redwing, professor of materials science and engineering and electrical engineering, with co-PIs Ying Liu, Nasim Alem, Thomas Jackson and Suzanne Mohney, all faculty at Penn State. The award is for $1,964,494. “Our project is aimed at developing Chemical Vapor Deposition (CVD) and Atomic Layer Deposition (ALD) processes to synthesize 2D materials. The 2D crystal films will be explored for applications in thin film electronics and superconductivity,” said Joan Redwing. • "Ultra-low Power, Collective-state Device Technology Based on Electron Correlation in Two-Dimensional Atomic Layers" is led by Joshua Robinson with Co-PIs Suman Datta and Roman Engel-Herbert of Penn State, James Freericks, Georgetown University and Eva Andrei, Rutgers University. The award is for $2,000,000. “This program will develop a ‘post silicon’ transistor based on the principal of strong electron correlation and associated phase transitions in two-dimensional materials,” said Robinson. In addition, a third funded project, “Crystalline Atomically Thin Layers for Photonic Applications,” is a multidisciplinary collaboration between Rensselaer Polytechnic Institute, Penn State, Virginia Polytechnic Institute and State University, and Washington University in St. Louis investigating 2D material synthesis, condensed matter theory, and optical engineering, with the goal of developing a new class of photonic devices. Led by RPI, this $2,000,000 project includes Penn State co-PIs Zhiwen Liu, professor of electrical engineering, and research associate in physics Ana Laura Elias Arriaga. The Penn State subaward is $740,000.

“The goal of our project is to study the nonlinear optical properties of two-dimensional transition metal dichalcogenides and investigate their photonic applications. These 2D materials have very large optical nonlinearity, and, for example, can produce strong second harmonic generation. The combination of their novel optical properties and atomic thickness creates a unique opportunity for using these materials to ‘dress’ photonic devices and provide new functionalities,” Zhiwen Liu said.

“2D expertise is very diverse at Penn State and includes electronics, bio, optics, synthesis, characterization and theory,” said Mauricio Terrones, director of the 2DLM Center and professor of physics, chemistry and materials science and engineering. “Including students, post-docs and faculty, we have about 50 people involved.”