The Past and Present of HIV: Three Decades of Care at UAB's 1917 Clinic 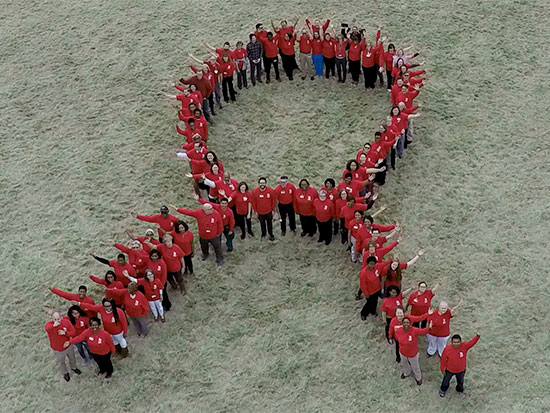 In its three-decade tenure, the 1917 Clinic has grown from an unassuming clinic at 1917 Fifth Ave. South to an NIH-funded facility with a staff of more than 150.

Newswise — In 1988, contracting HIV was seen as a death sentence, and those living with it were marginalized in society by stigmas. That same year, Michael Saag, M.D., UAB professor of medicine and director of the UAB Center for AIDS Research, opened the UAB 1917 Clinic to treat HIV. While anonymity was important and publicity limited, Saag and a small staff treated 100 patients in the first year — local patients and those who traveled from all corners of Alabama and across state lines to seek care.

Nearly 30 years later, the 1917 Clinic is celebrating three decades and treating more than 12,000 patients living with HIV since its doors opened. A milestone that has defied odds and helped shift public perception and the conversation about HIV, the clinic’s continued growth and need in the community has enabled it to be the largest HIV medical provider in the state, as well as a national leader in care.

“What was once a death sentence when we opened the clinic is now a manageable chronic disease,” Saag said, reflecting on the early years after opening the clinic. “The strides that have been made in 30 years from an awareness standpoint, in treatment and therapy available — even bipartisan federal recognition and funding through The Ryan White Care Act — have drastically changed the trajectory of this disease and how people living with HIV can lead their lives.”

In its three-decade tenure, the 1917 Clinic has grown from an unassuming clinic at 1917 Fifth Ave. South to an NIH-funded facility with a staff of more than 150. It includes on-site care clinics including dental, psychiatric and neurologic, as well as prevention services that aim to educate audiences about the disease, preventive measures for those at risk of infection, and treatment options available to those who are living with HIV.

What’s more, the 1917 Clinic has received Ryan White Early Intervention Service funding since 1997 and receives more than any other clinic in the country; this funding helps support outpatient health services that deliver care to those infected with HIV. The clinic has also received federal funding to implement HIV care into other practices, and serves as an education and training arm for the Southeast region.

“What many people may not realize is that our clinic has provided a continuum of care throughout the patient’s life,” said Clinic Director James Raper, Ph.D., CRNP. “As our patients age with the disease, our therapies shift, and we continue to determine the best treatment possible for that specific person in regard to their entire health. We are still seeing patients who first came to the clinic in 1988 and know that, as we continue to inch closer to a cure, our clinic will continue to evolve to fit the needs of our patients.”

Looking toward the next 30 years

The doctors and staff at the 1917 Clinic are proud of their work over the past 30 years, but know there is still a great deal to be done in terms of treatment and eradicating HIV/AIDS in the future. Top-of-mind is educating those infected in our state about how to manage their HIV, while also seeking out those who are infected and those who are at risk, and equipping them with the education and care they need.

This includes continuing to break down stigmas and barriers that come with perception of the disease, including how people get infected and the socio-economic status of those living with HIV, as well as talking about burdens that hinder people from obtaining care, such as poor access to public transportation or mental illness.

“Currently in Alabama, roughly 14,000 people are living with HIV,” Raper said. “Of that number, 10,000-12,000 are engaged in care, with 3,500 or so seeking care at the 1917 Clinic. There are also 40 percent of people living with HIV/AIDS in our state who are not engaged in care and do not have symptoms currently, and we must help them understand how to manage the disease, as 70 percent of new infections come from that population.”

This includes outreach to the African-American community in particular, as that demographic continues to be disproportionately affected by HIV. According to the U.S. Census Bureau, African-Americans make up 26.8 percent of Alabama’s population, but have accounted for 70 percent of all newly diagnosed HIV cases in 2016 and 64.3 percent of all persons living with HIV to date.

While a cure for HIV/AIDS has not been found, Turner Overton, M.D., co-director of the Alabama Vaccine Research Clinic and medical director of the 1917 Clinic, is enthusiastic about the future of treatment and where research is heading. “In the past, we were focused on just developing treatments to sustain patients, but now we are pushing the envelope and looking toward once-a-day regimens or even long-term shots that could be taken every four to eight weeks; an even more aggressive forecast, we’re exploring medications that would only need to be taken every six to 12 months. We’re getting closer to identifying a cure for HIV and working on many strategies to eliminate HIV infection entirely.”

Caption: In its three-decade tenure, the 1917 Clinic has grown from an unassuming clinic at 1917 Fifth Ave. South to an NIH-funded facility with a staff of more than 150.