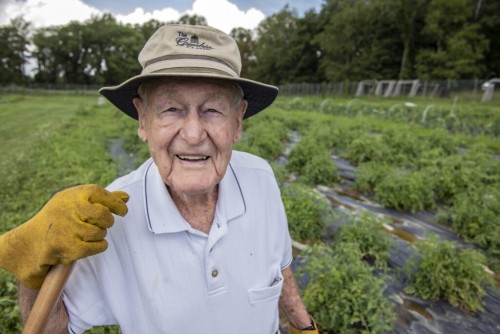 Mannon Gallegly, professor emeritus of plant pathology, still tends to tomato plants and research at the WVU Organic Farm well into his 90s. Gallegly recently decided to donate some tomato seeds to the World Vegetable Center, which will distribute them to nations with food supply issues.

Mannon Gallegly shows a tomato leaf hit by the fungus Septoria. Gallegly has developed a tomato resistant to the fungus and will donate seeds to developing countries.

Newswise — For 71 years, one West Virginia University plant pathologist has tinkered with the tomato, turning over multiple iterations resistant to blight and other vegetable diseases.

Now the fruits of Mannon Gallegly’s labor will be adored by tomato lovers across the world, particularly in developing countries marred by food supply issues.

Gallegly is donating tomato seeds to the World Vegetable Center, a global nonprofit institute for vegetable research and development. The Center aims to reduce malnutrition and poverty in developing nations through improving production and consumption of vegetables.

“Dr. Gallegly’s work demonstrates that our research and service often have impacts that last for many years beyond their conception and across many miles to improve the quality of life for everyone,” said Vice President for Research Fred King. “Initially, his work was fully-engrained in the land-grant mission. Now his research has spread across the globe.”

The seeds donated by Gallegly will be resistant to fungus. In turn, the World Vegetable Center will use those seeds to develop more for developing countries.

“The overall goal is to get better food sources for the poor, developing countries,” Gallegly said.

Specifically, Gallegly has tackled Septoria, a fungus that causes leaf spot diseases on vegetables, such as tomatoes, and is responsible for yield losses. Gallegly has backcrossed tomato varieties to develop one that’s resistant to Septoria.

He said he’s thankful that the seeds will be venturing into parts of the world that need nourishment and that his previous versions, like the West Virginia ’63, have touched all corners of the state and across the country.

“The last seeds I sent went to a tomato breeder at North Carolina State,” Gallegly said.

After graduating from the University of Wisconsin in 1949 with his doctorate in plant pathology, Gallegly began teaching as an assistant professor at WVU. He worked his way up to director of the Division of Plant and Soil Sciences, a post he held from 1970-1986.

He received the AAAS Campbell Soup Award in 1960. He also received certificates of recognition from WVU for contributions to the state of West Virginia, and from the USDA Agricultural Research Service North Atlantic Region for assistance in staffing of the Appalachian Fruit Research Station and the Appalachian Soil and Water Resources Lab.

In 2017, he was named a “Most Loyal” during the 70th annual Mountaineer Week.

Caption: Mannon Gallegly shows a tomato leaf hit by the fungus Septoria. Gallegly has developed a tomato resistant to the fungus and will donate seeds to developing countries.