Three prizes of $50,000 will be awarded to early-career foreign-born biomedical research scientists in 2022

Newswise — NEW YORK, March 1, 2021 /PRNewswire/ -- The Vilcek Foundation has announced an open call for applications for the 2022 Vilcek Prizes for Creative Promise in Biomedical Science. 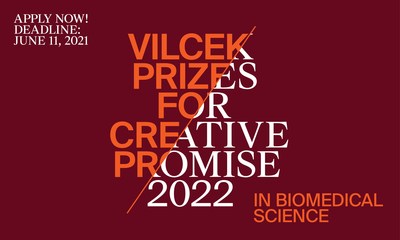 In 2022, the Vilcek Foundation will award three prizes of $50,000 to individuals whose early career work in biomedical science exemplifies outstanding scientific accomplishment and represents a significant contribution to their area of research. Applications will close on June 11, 2021. Recipients of the 2022 prizes will be publicly announced in September 2021. Each recipient will receive a commemorative award and an unrestricted cash prize of $50,000.

The Vilcek Prizes for Creative Promise in Biomedical Science are part of the Vilcek Foundation Prizes program. Inaugurated in 2006, the Vilcek Foundation Prizes raise awareness and visibility of the contributions of immigrants in the biomedical sciences, and in the arts and humanities. The program extols the value of immigration for intellectual and cultural advancement in the United States.

"Immigrant scientists have contributed to the United States' position as a world leader in scientific research and discovery," says Jan Vilcek, chairman and CEO of the Vilcek Foundation. "With the Vilcek Prizes for Creative Promise in Biomedical Science, we recognize individuals who immigrated to the United States, and who bring unique insight, perspective, and experience to their work."

"The Vilcek Foundation's work is important because we are speaking to the value of immigration in a non-politicized way," says Vilcek Foundation President Rick Kinsel. "In honoring immigrants whose scientific and artistic contributions have a positive impact on our society, we amplify the importance of diversity and cultural exchange."

The application includes an application form and requires the submission of a curriculum vitae, authored works, three short personal essays, and proof of immigration status. Recipients of DACA and asylees are encouraged to apply. Applications will be accepted from March 1 through June 11, 2021, 5:00 pm Eastern Time.

Eligible candidates must have been born outside the United States, be living and working in the United States, and hold a doctoral degree. Eligible candidates should hold a full-time position with an academic institution or research organization as an assistant professor, associate professor, or equivalent. Candidates must have been born on or after January 1, 1983. More information is available at the following link: http://vilcek.co/cpp2022biomedpr.

The Vilcek Foundation raises awareness of immigrant contributions in the United States and fosters appreciation of the arts and sciences. The foundation was established in 2000 by Jan and Marica Vilcek, immigrants from the former Czechoslovakia. The mission of the foundation—to honor immigrant contributions to the United States, and more broadly to foster appreciation of the arts and sciences—was inspired by the couple's respective careers in biomedical science and art history. Since 2000, the foundation has awarded over $5.8 million in prizes to foreign-born individuals and supported organizations with over $5.2 million in grants.