To Tell the Sex of a Galápagos Penguin, Measure Its Beak, Researchers Say

To tell the sex of a Galápagos penguin, measure its beak, researchers say

It turns out that to tell the sex of a Galápagos penguin, all you need is a ruler.

Newswise — In a paper published April 5 in the journal Endangered Species Research, scientists at the University of Washington announced that, for a Galápagos penguin, beak size is nearly a perfect indicator of whether a bird is male or female. Armed with this knowledge, researchers could determine the sex of a bird quickly and accurately in the wild without taking a blood sample — speeding up field studies of this unusual and endangered seabird.

"For Galápagos penguins, we really wanted to understand if there was a simple 'rule' we could employ to determine sex — a sign that would be fast and reliable," said lead author Caroline Cappello, a UW doctoral student in biology.

Galápagos penguins are the only penguins to live in an equatorial region. Like all penguin species and most birds, they lack external genitalia. In addition, male and female Galápagos penguins look similar to one another and both share parenting duties, incubating eggs and rearing the offspring. Males do tend to be slightly larger than females, but the difference is slight. A DNA test is available to determine the sex of a Galápagos penguin, but that requires obtaining a blood sample from each individual — an invasive and time-consuming process.

"We were hoping to find a physical trait to determine sex in Galápagos penguins that would be simple to measure in the field," said Cappello. "By finding such a sex-specific trait, we could use that in our field studies on whether shifting climactic conditions affect male and female Galápagos penguins differently."

To search for a physical sign of sex, from 2010 to 2014 senior author and UW biology professor P. Dee Boersma collected body measurements from 61 adult Galápagos penguins in the wild — including head size, flipper length, foot length and a half-dozen measurements of the beak and its surrounding feathers. Boersma also obtained blood samples from each penguin and sent them to Patty Parker, a professor at the University of Missouri-St. Louis, to determine the sex of each adult using the DNA test.

Cappello combined the body-size measurements and DNA test results into a statistical analysis to search for physical characteristics that correlated with the sex of the bird. She found that males had slightly thicker beaks — measured from top to bottom — compared to females. Using beak size alone, Cappello could correctly determine the sex of more than 95 percent of their study penguins. This has been reported for several other penguin species, but Cappello and Boersma are the first to test it by genetic analysis for the Galápagos penguin.

This knowledge will help the UW team study Galápagos penguins in what Boersma has called a "predictably unpredictable" place. Straddling the equator, the Galápagos Islands are perfectly placed to take advantage of an upwelling of Pacific Ocean currents. This upwelling typically brings nutrients that support small-schooling fish to the islands for the penguins and other marine animals to feast upon, said Boersma, who has been studying Galápagos penguins for more than four decades.

But El Niño events can disrupt these currents and collapse the Galápagos food web, leading to starvation. This puts a strain on the penguin population, which numbers between 1,500 and 4,700 individuals. According to Boersma's research, in particularly lean El Niño years, Galápagos penguins can even stop breeding altogether. Climate change is expected to increase the occurrence of El Niño conditions and extreme weather events.

Other preliminary studies have suggested that male Galápagos penguins are more likely to survive extreme environmental conditions compared to females. Scientists do not know why, and studies of sex-specific survival during El Niño years were hampered because researchers lacked easy ways to determine the sex of individual penguins — that is, until now.

"Now we can start to look at whether climate change will impact male and female Galápagos penguins differently, and what kind of strain this might put on their ability to survive as a species," said Cappello. 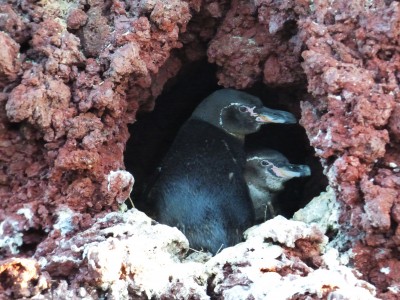 Caption: The Galápagos Islands are volcanic in origin. With little foliage along the coasts, Galápagos penguins often co-opt lava tubes for their nests. 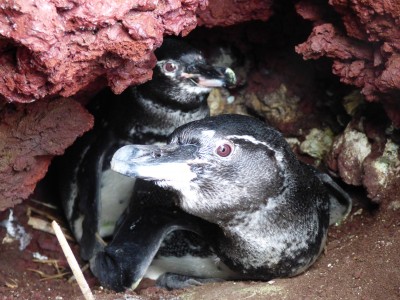 Caption: Cappello found that the beaks of male Galápagos penguins — measured from top to bottom — were slightly thicker than female beaks. Beak size alone could correctly determine the sex of more than 95 percent of the penguins in her study. 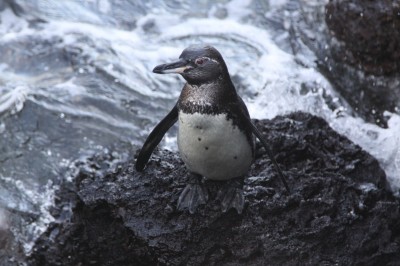