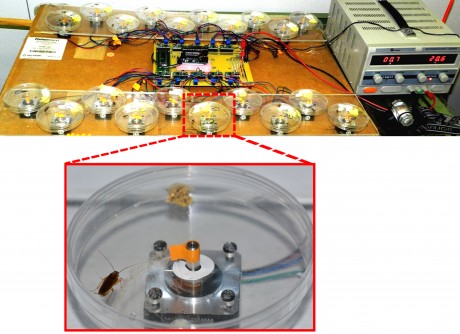 Newswise — To speed up reproduction, there’s no substitute for the tender touch of a live cockroach.

That’s the major takeaway from a North Carolina State University study examining whether artificial antennae – in this case, duck feathers – can mimic a cockroach antenna’s capacity to hasten reproduction in cockroach females. Female cockroaches that get “touched” – by other female cockroaches and, under certain conditions, even by duck feathers that mimic roach antennae – reproduce faster than female roaches that live in isolation or without tactile stimulation. Pairing two cockroaches together – even roaches of different species – speeds up reproduction the most.

“To understand the mechanisms behind tactile stimulation and reproduction, we devised a motor-driven system using duck feathers as stand-ins for cockroach antennae. We found that these artificial antennae worked to stimulate certain hormones that speed up reproduction in the female German cockroach,” says Dr. Coby Schal, Blanton J. Whitmire Professor of Entomology at NC State and the senior author of a paper describing the research. “We also found that the shape of the artificial antenna doing the ‘touching’ and the speed and duration of the stimulation were key factors that influenced reproduction speed.”

To elucidate the role that tactile sensation plays in reproduction, the researchers, led by first author Adrienn Uzsak, a former Ph.D. student in Schal’s lab, performed a number of experiments. Throughout all the experiments, the researchers showed that isolating female roaches, or exposing them to dead roaches, slowed the reproductive process.

Isolating a female cockroach in a Petri dish while allowing another cockroach’s antennae to protrude into the dish sped up reproduction greatly, but cutting the interloper’s antennae down to nubs stifled reproduction speed to that of roaches in isolation. The researchers also developed a motorized chamber that rotated a duck feather inside a Petri dish to act as a surrogate roach antenna. The researchers changed both the speed of the rotating feather and the duration of stimulation. Short bursts of stimulation with slow motor speeds led to faster reproduction, while longer stimulation bouts with a fast-moving feather slowed reproduction.

Finally, the researchers used different types of duck feathers in the motorized chamber, contrasting longer, barbed feathers with shorter, unbarbed feathers. Longer, barbed feathers stimulated faster reproduction. “In studies over the years, we’ve learned how challenging it is to pinpoint the role of tactile stimulation in reproduction, although we knew from the start that it was important,” Schal said. “Now we’ve learned that, under the right conditions, artificial antennae – including some that are quite different from cockroach antennae – can speed up reproduction, clarifying the importance of antennal contact and the role of antennal movement. Now that we have an experimental approach for consistent tactile stimulation, our next challenge is to understand how these stimuli cause females to produce more of the hormone that accelerates reproduction.” The study appears online in Proceedings of the Royal Society B. James Dieffenderfer and Dr. Alper Bozkurt, form NC State’s Department of Electrical and Computer Engineering, co-authored the paper. Funding from the U.S. Department of Agriculture, the National Science Foundation and the Blanton J. Whitmire endowment powered the work.

Abstract: Tactile stimuli provide animals with important information about the environment, including physical features such as obstacles, and biologically relevant cues related to food, mates, hosts and predators. The antennae, the principal sensory organs of insects, house an array of sensory receptors for olfaction, gustation, audition, nociception, balance, stability, graviception, static electric fields, and thermo-, hygro- and mechanoreception. The antennae, being the anteriormost sensory appendages, play a prominent role in social interactions with conspecifics that involve primarily chemosensory and tactile stimuli. In the German cockroach (Blattella germanica) antennal contact during social interactions modulates brain-regulated juvenile hormone production, ultimately accelerating the reproductive rate in females. The primary sensory modality mediating this social facilitation of reproduction is antennal mechanoreception. We investigated the key elements, or stimulus features, of antennal contact that socially facilitate reproduction in B. germanica females. Using motor-driven antenna mimics, we assessed the physiological responses of females to artificial tactile stimulation. Our results indicate that tactile stimulation with artificial materials, some deviating significantly from the native antennal morphology, can facilitate female reproduction. However, none of the artificial stimuli matched the effects of social interactions with a conspecific female.