Toward 20-Story Earthquake-Safe Buildings Made From Wood 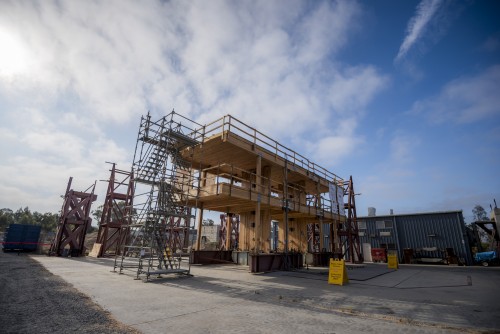 Researchers are testing a two-story wooden structure this week at the UC San Diego shake table. 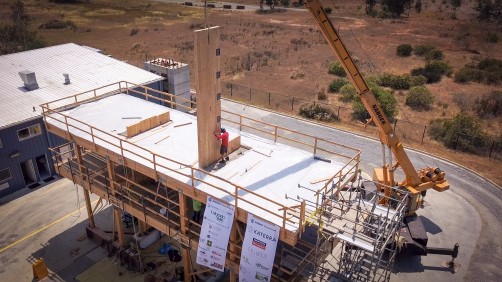 A rocking wall, which can rock during a temblor and then re-center back by itself, is installed in the two-story wooden structure. 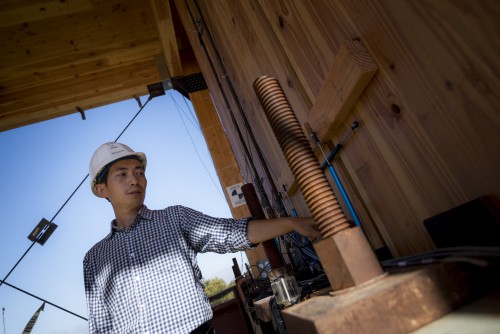 Lead researcher Shiling Pei, from the Colorado School of Mines, inspects the building after a test.

Toward 20-story Earthquake-safe Buildings Made from Wood

See and navigate in a 3D reconstruction of the structure

The goal of the tests is to gather enough data to design wood buildings as tall as 20 stories that do not suffer significant damage during large earthquakes. That is, not only can occupants leave the building unharmed, but they can come back and resume living in the building shortly after a temblor.

“Designing buildings that are safe even during large earthquakes is hugely important. We are doing that – and we are going further. We are working to minimize the amount of time buildings are out of service after large earthquakes. We are also focused on cutting the costs required to repair them,” said professor Shiling Pei, an Assistant Professor at Colorado School of Mines who is leading the tests funded by the National Science Foundation (NSF) and a variety of industry sponsors.

Based on the insights gleaned from this current set of tests and related research, the team will return to San Diego in 2020 to build, shake, and ultimately burn an earthquake-resilient 10 story timber building on the UC San Diego shake table.

In the current tests of the two-story, 22-foot-tall structure, the researchers are studying the behavior of full-scale seismic safety systems made from advanced wood materials – including rocking walls, which can rock during a temblor and then re-center back by itself, and a mass timber floor designed to withstand strong earthquakes. The wood is primarily cross-laminated timber (CLT), which is a relatively new, high-performance material made from layers of wood laminate.

“With the arrival of cross-laminated timber, we can start thinking about timber skyscrapers,” said Pei. “CLT and mass timber more generally are part of a massive trend in architecture and construction, but the seismic performance of tall buildings made from these kinds of wood is uncharted waters.”

During the July 14 test, the building and its seismic safety systems seemed to do well. Researchers first put the two-story structure through a simulation of the 6.4-magnitude Imperial Valley earthquake, which took place in 1979 near the U.S.-Mexico border. That test was followed within a few minutes by two back-to-back simulations of the the 1994 Northridge earthquake.  After inspecting the building without finding significant damage, researchers then put the structure through simulations of the 1989 Loma Prieta earthquake and the 6.6 magnitude Superstition Hills earthquake, which took place in 1987 near the Salton Sea.

More shakes will follow in the next few weeks as researchers test different seismic safety designs and systems.

The researchers from a consortium of U.S. universities, with collaborators from industry and the public sector, are performing the tests on the UC San Diego shake table, the largest outdoor shake table in the world.The facility is part of [email protected], an experimental facility at UC San Diego funded by the National Science Foundation as part of its Natural Hazard Engineering Research Infrastructure (NHERI) program. The facility is located at the Englekirk Structural Engineering Center at the UC San Diego Jacobs School of Engineering.

Beyond Safety: Designing for Resiliency

Current seismic safety building codes aim to ensure human safety in large earthquakes, allowing buildings to stand long enough for occupants to leave unharmed. The building codes, however, don’t necessarily ensure that occupants will actually have a building to return to. Designing buildings that are expected to be back in service soon after a large earthquake, and with minimal repair costs, is known as designing for earthquake resiliency.

“In a large earthquake, the people inside a building may be safe, but if the building frame is crushed, they won’t have a building to return to. We want to improve on that situation,” said Pei.

Resiliency is one of the key tenants of this multi-year research project focused on tall wood buildings using mass timber materials.

“Building owners want to know, after a large earthquake, ‘How many months am I out?’” said Pei. “We want to be able to say to building owners, ‘You’ll be out for a week, and the building will likely just need repairs to a few systems that are designed to be damaged.”

The 22-foot structure being tested this month is a minimalist system aimed at collecting the information required to design tall timber buildings that have this kind of earthquake resilience.

One of the key goals is to study how the different seismic safety systems interact with each other during realistic earthquake simulations.

“We have tested the rocking walls by themselves in the lab, but as structural engineers, we know that the system is not equal to the sum of its parts. There are interactions between the parts. That’s why NHERI projects funded by the NSF are so critical. We are finally going to be able to get data on how the different components function as a system during strong earthquakes,” said Pei.

The data the researchers collect during the two-story tests will be crucial for developing the design methodology for the 10-story building.

“It’s exciting to see our earthquake shake table facility being used to design, test and validate resilient seismic safety systems made from innovative, renewable materials,” said UC San Diego structural engineering professor Joel Conte, who is the principal investigator on the NHERI NSF grant that funds the shake table operations. “Our shake table enables researchers to test structural specimens at full-scale for severe earthquake ground motions, which is crucial for making the kinds of structural engineering advances that save lives and enhance the resilience of communities after natural disasters.”

The researchers working on the two-story building are collecting data through more than 300 sensor channels in three phases of testing. Data is generated at pre-selected points to measure how the cross-laminated timber (CLT) panels bend and how the panels move relative to each other. Researchers are particularly interested in a system that allows the building to rock in response to an earthquake and on how the walls and floors interact during shaking.

In rocking wall systems, vertical, mass timber walls are connected to the foundation by post-tensioned rods that run up through the floor and special U-shaped steel energy dissipaters. The rods allow the wall to rock during an earthquake and snap back into its original upright position, minimizing the deformation and the resulting structural damage.