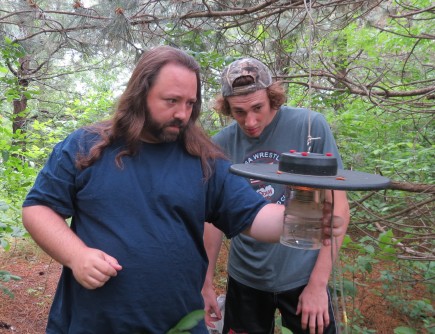 SDSU doctoral student Geoffrey Vincent and undergraduate Lucas Zilverberg check the light and fan on a mosquito trap in the Dakota Nature Park in Brookings. Their work helps the South Dakota Department of Health track West Nile virus by monitoring the mosquito population. 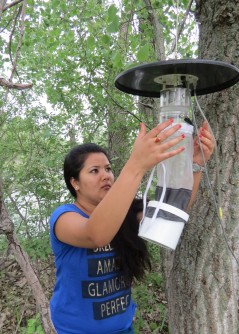 Undergraduate Kajol Khatri of South Dakota State University replaces the net on a mosquito trap in the Dakota Nature Park in Brookings. She collects mosquitoes four days a week as part of the South Dakota Department of Health’s West Nile virus surveillance program.

Newswise — When it comes to fighting West Nile virus, it’s all about timing.

Through a three-year NASA grant, two South Dakota State University researchers will help mosquito control officials use mosquito surveillance and environmental data to target West Nile virus. People notice the nuisance mosquitoes that come out early in the season, but the Culex tarsalis mosquito, which carries West Nile, is active later in the season and later in the evening, explained SDSU biology professor Michael Hildreth. Since 2003, he has helped the South Dakota Department of Health with statewide mosquito surveillance for West Nile virus.

An increasing number of communities are developing mosquito control programs, thanks in part to funding through the S.D. Department of Health, according to Hildreth. Monitoring the week-to-week variability of environmental conditions will help officials better target their spraying strategies.

Through this grant, senior scientist Michael Wimberly of the Geospatial Sciences Center of Excellence will further refine a West Nile prediction model that that he began developing in 2009. It combines environmental data gathered through earth-imaging satellites with the S. D. Department of Health’s mosquito surveillance data. “When we started, we were focused on making one big forecast for the upcoming year,” Wimberly explained. “That was interesting from a science standpoint, but difficult to translate into specific public health recommendations.”

Using the nearly $685,000 grant, the researchers will focus on what Wimberly calls “details that will be useful to public health officials.”

For instance, he explained, “By blending the most recent data from mosquito traps with maps of temperature and other environmental variables, we will be able to identify specific times and places where the risk of transmission is highest.” The information will be available on a new website.

Understanding the timing will help mosquito control program managers decide where to put their limited resources. “The main point is to produce up-to-date information that is actionable,” Wimberly added. One graduate student and a postdoctoral researcher are working on the project.

By comparing environmental data, Wimberly has found that milder winters and hotter summers are associated with larger West Nile virus outbreaks. Colder temperatures affect the overwintering survival of the mosquitoes.

Though mosquito populations bounce back quickly when temperatures rise, he pointed out, “the virus recovers more slowly.” Warmer temperatures during the West Nile virus season increase mosquito activity and allow more mosquitoes to become infected by the virus.

The researchers will work with South Dakota Department of Health Epidemiologist Lon Kightlinger to encourage public health officials to access the website.

“West Nile viral disease has hit South Dakota hard the past 13 summers,” Kightlinger noted. “Using the research data will help communities strategically plan their spraying as we increase our understanding of the disease’s transmission dynamics.”

The success of the project will be determined by the extent to which mosquito control personnel are able to use this information, according to Hildreth. “Public policy and science are now coming together to help solve this problem.” 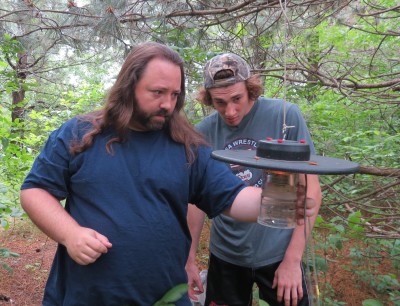 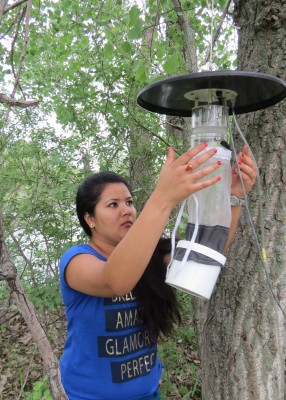