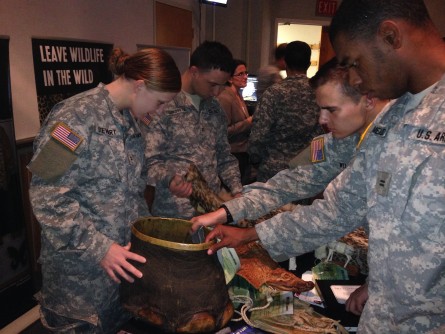 Newswise — NEW YORK (October 21, 2013) – The Wildlife Conservation Society (WCS) and the U.S. Military Academy at West Point released this photo of West Point cadets examining illegal wildlife items, including a preserved elephant’s foot, commonly found for sale in areas where U.S. soldiers are deployed. On October 2nd Dr. Heidi Kretser, Livelihoods and Conservation Coordinator for WCS, talked to 150 cadets about illegal wildlife trafficking, the dangers of purchasing illegal wildlife items while stationed overseas, and the consequences that such actions can have on their careers and missions.

“The cadets were very receptive to this information.” said Kretser. “Many were unfamiliar with the laws and potential consequences for soldiers related to purchasing illegal wildlife products, and to the species put at risk by these crimes. In addition, they made the connection on how the purchase and transport of such products can result in the inadvertent support of organized crime, threats associated with disease, and the depletion of scarce and/or culturally significant natural resources.”

Wildlife products available on bases in Afghanistan, Iraq and elsewhere, which include claws, teeth, pelts, meat, horns, and ivory products, come from locally or globally threatened or endangered species. Law enforcement authorities are finding that organized crime groups that smuggle weapons and drugs are increasingly involved with the trade of illegal wildlife – a trade that is estimated to reach into the billions of dollars and also threatens U.S. security.

To raise the awareness level, Kretser has spoken to cadets for the last four years at West Point, Fort Drum, and to other units being deployed to Afghanistan. Cadets are particularly important as they will step into leadership roles in the military. In addition, WCS has created a series of outreach tools in an ongoing initiative supported by the DoD Legacy Program, including the attached training video (seen here).

• To address the significant effects of wildlife trafficking on the national interests of the United States, President Obama recently created a Presidential Task Force that includes a senior representative from the DoD and WCS President and CEO, Cristián Samper, among others.