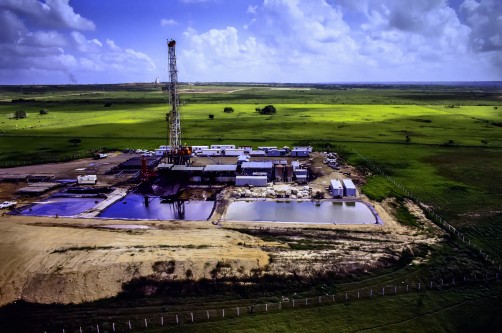 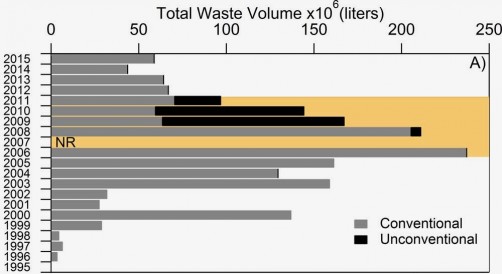 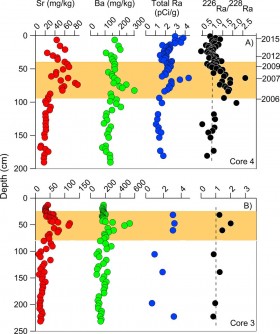 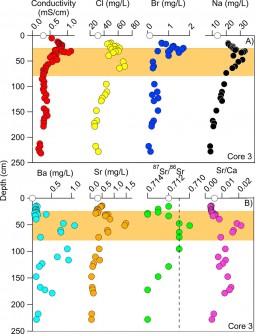 Newswise — UNIVERSITY PARK, Pa. -- Given Pennsylvania’s abundant natural resources, it’s no surprise that the commonwealth has become a mecca for hydraulic fracturing. Researchers, however, have recently discovered that releasing millions of gallons of treated hydraulic fracturing wastewater each year into area surface waters may have longer-lasting effects than originally thought.

According to the U.S. Energy Information Administration, hydraulic fracturing accounted for more than one-half of U.S. oil production and two-thirds of U.S. gas production in 2015. That percentage is expected to rise as more states begin to adopt the practice. Although studies show that hydraulic fracturing does produce less greenhouse emissions than older technologies like coal, it does come with other environmental concerns. At the top of that list is the wastewater it produces, which contains a multitude of potentially hazardous contaminants. In 2015 alone, Pennsylvania’s unconventional gas wells produced nearly 1.7 billion gallons of wastewater. While there are facilities dedicated to treating the wastewater before its release, they provide only limited treatment, leaving many of the pollutants intact.

To gain a better understanding of the impact of these contaminants on the environment, Penn State environmental engineering professor Bill Burgos and his colleagues studied sediment samples collected from a reservoir in western Pennsylvania. The study was published in the most recent issue of Environmental Science & Technology.

“There wasn't a water keeper who was sitting in these rivers collecting these samples at a great continuous clip, so in a way, a lot of information just flowed by,” Burgos said. “But in certain reservoirs, where sediments collect over time, there are layers of sediment that are like rings of a tree; you can look into the sediments and capture time and spatially composite samples.”

The objective of the study was to use the sediments that had built up to reconstruct the industrial oil and gas activity that was happening during the boom of the Marcellus Shale development in Pennsylvania, from roughly 2008 to 2015, in order to gain a better understanding of the historical impact of oil and gas wastewater disposal.

Xiaofeng Liu, assistant professor of civil engineering, developed a computer model to reconstruct the layers of sediment in order to identify the best sampling location. The researchers chose the Conemaugh River Lake in western Pennsylvania. This site offered high wastewater concentration and low wastewater dilution as well as a dam-controlled reservoir.

Once the location was decided, the team began collecting samples.

“We inserted a tube in the sediment like you would put a straw in a Slurpee® or a slushy,” Burgos said. “You put your thumb over the straw, and you pull it out.”

In this case, they used agricultural drainpipe, plastic caps and tape, rather than a straw and a thumb, to collect the sediment samples, which were immediately frozen to preserve the content and then brought back to the Kappe Environmental Engineering laboratory at Penn State.

Once in the lab, the researchers pushed out the samples like a Popsicle®, cutting them into slices.

“We split them up into different sections so that we could run different analyses on them,” said Nathaniel Warner, assistant professor of environmental engineering at Penn State and co-author on the study.

Warner said the researchers, in collaboration with Colorado State University, looked for high radioactivity signatures and measured the pore water and the radioisotopes to determine the age of the sediments. They also tested the major mineralogy, particle size and grain size, in an effort to develop a full profile.

“The isotopes confirm these are unconventional oil and gas wastes,” said Burgos.

Some isotope ratios, such as strontium and radium, are rather unique to the Marcellus formation. A previous study conducted by Warner found that radium levels immediately downstream from one plant were roughly 200 times greater than in sediments located upstream of the facilities. This current study demonstrates that elevated levels were found as far away as 12 miles downstream from the treatment plants.

“These are contaminants that passed through these centralized waste treatment plants, and they can be transported great distances,” Burgos said.

Though the findings show long-term contamination of Pennsylvania watersheds, the researchers say the effects on the environment and human health are still unknown and difficult to assess.

The study did show a significant drop in the amount of contaminants released into surface waters following the voluntary ban on discharge of Marcellus waste requested by the Pennsylvania Department of Environmental Protection, which began in 2011, suggesting that tighter regulations of wastewater do help.

The researchers now want to use the materials they’ve collected to measure the biological toxicity of sediment layers throughout time. They also plan to test sediment samples at locations farther downstream toward Pittsburgh to see how far the contamination has spread and to what extent.

“Maybe they never make it to Pittsburgh,” Burgos said. “But the thing is, you look at a map and there are other plants upstream of Pittsburgh on the main stem of the Allegheny River and there's no reason to suggest that these plants aren't contributing the same thing.”

The U.S. Geological Survey, the Penn State Institutes of Energy and the Environment, the School of Global Environmental Sustainability and Water Center at Colorado State University, the Fulbright Program in Colombia and the Universidad Pontifica Bolivariana provided funding for this study.