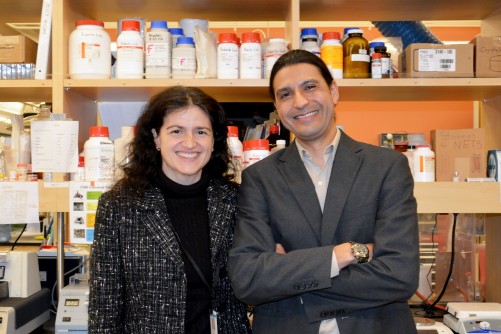 Newswise — LA JOLLA, CA – February 13, 2017 – In a new study, researchers at The Scripps Research Institute (TSRI) have described how two important molecules in the brain work together to trigger intense anxiety.

The new findings in animal models point to a novel interaction in the regulation of the brain’s stress response that may underlie the pathological anxiety related to symptoms of post-traumatic stress disorder (PTSD).

The researchers focused on the endogenous cannabinoid (endocannabinoid or eCB) system, which include natural lipid signaling molecules that bind to cannabinoid receptors in the brain. Cannabinoid (type 1) receptors control stress-mediating circuits by inhibiting neurotransmitter release—a sort of gating mechanism to keep anxiety in check.

In contrast to the stress-reducing properties of endocannabinoids, a peptide molecule called corticotropin-releasing factor (CRF) activates the stress response and promotes increased sensitivity to stress and anxiety when activated over and over again.

In the new study, published today in the journal Biological Psychiatry, the researchers investigated the interaction between the stress-promoting (CRF) and stress-constraining (eCBs) mechanisms in the central nucleus of the amygdala, a critical brain region involved in mediating emotional reactions. The findings suggest that overactive CRF signaling in this region produces a wide range of effects that override the stress-reducing capabilities of a major eCB called N-arachidonoylethanolamine (anandamide), turning chronic stress into unchecked, or pathological, anxiety.

“Anxiety is something that everyone experiences on a day-to-day basis,” said study first author Luis A. Natividad, a research associate in the Roberto lab. “But it is unclear what changes this otherwise natural process into something debilitating.”

To answer this question, Roberto’s lab teamed up with Roberto Ciccocioppo’s lab at the University of Camerino, Italy, and the lab of TSRI Professor Loren (“Larry”) Parsons, a renowned leader in the fields of endocannabinoid signaling, stress and drug addiction who passed away in 2016.

The researchers studied rats that were genetically selected for higher alcohol drinking and also display an anxiety-like phenotype. These rats exhibit a mutation in a gene called Crhr1 that increases CRF (type 1) receptor signaling.

Using behavioral, neurochemical and electrophysiological approaches, the researchers found that increased CRF signaling led to elevated activity of the anandamide clearance enzyme fatty acid amide hydrolase (FAAH). Increased CRF was also associated with drops in anandamide levels in the central nucleus of the amygdala. Together, increased FAAH activity and decreased anandamide signaling reduce inhibitory control of excitatory neurotransmission in this critical region, and lower the brain’s ability to regulate stress and anxiety.

The researchers concluded that long-term dysregulation of CRF-FAAH mechanisms in the amygdala keeps anandamide from doing its job. Without anandamide to balance out the system, the brain is primed to react to stress.

Follow-up experiments showed that inhibiting FAAH could blunt CRF’s effects and reduce signs of anxiety in the rats.

Roberto said the next step will be to further study this rat model to better understand relationships between high anxiety and alcoholism. She added that the rat model could also be useful for studying PTSD, where high anxiety is connected to a higher risk of developing alcoholism.

“The results of our study may be useful, not only in understanding the neurobiological basis of alcoholism, anxiety and possibly PTSD, but also in developing more efficacious pharmacotherapies to treat these disorders,” added Ciccocioppo.

The researchers dedicated this study to Parsons. Natividad added a note on Parson’s influence on the research and on the TSRI campus:

“Larry's guidance throughout the study was critical in bringing together a cohesive story exploring the relevance of endocannabinoid signaling with downstream neural processing in a way that is unique to the field and has translational relevance to the human condition. He serves as a role model for me not only as a scientist, but also in terms of being a good colleague, mentor and friend to those around him. I feel privileged to have been part of his lab, his teachings and mentorship. He will be dearly missed.”