Findings Could Guide Development of Treatments for Lassa Fever 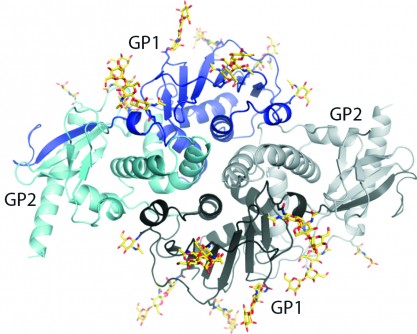 The new structure gives scientists a new view of lymphocytic choriomeningitis virus (LCMV), a virus present on every continent except Antarctica.

Newswise — LA JOLLA, CA – April 26, 2016 – For the first time, scientists at The Scripps Research Institute (TSRI) have solved the structure of the biological machinery used by a common virus to recognize and attack human host cells.

The new structure gives scientists the first view of the glycoprotein of lymphocytic choriomeningitis virus (LCMV), a virus present on every continent except Antarctica. Not only does the research reveal important traits in LCMV, it also points to possible drug targets on LCMV’s close relative: Lassa virus.

“LCMV has been a beacon that has illuminated immunology and virology for decades,” said TSRI Professor Erica Ollmann Saphire. “This structure provides the missing roadmap to understand how to defend against its extremely lethal cousin, Lassa virus.”

The study was published April 25, 2016, in the journal Nature Structural & Molecular Biology.

LCMV is a rodent-borne virus that rarely causes noticeable symptoms in people, although it can progress to cause dangerous swelling in the brain and spinal cord of immunocompromised patients and birth defects when contracted during pregnancy.

Over the years, the virus has served as a tool for understanding how the body responds to viral infections. “LCMV was the experimental virus that has illuminated much of what we understand about immunology and virology,” said Saphire. These studies included work in Frank Dixon’s lab at the fledgling Scripps Clinic and Research Foundation. Saphire describes LCMV as a “beacon” for virology.

TSRI Professor Michael Oldstone, co-author of the new study, did much of that foundational work on LCMV and has long recognized LCMV’s similarity to Lassa virus, which looks identical under an electron microscope and shares 65 percent identity in the glycoprotein gene. Lassa is a much more deadly disease, however, causing thousands of deaths every year.

While LCMV is a critical research tool, in the past 80 years scientists have been missing an important piece of the puzzle: a structural understanding of the proteins LCMV uses to initiate infection.

Solving that structure took 10 years and has led to interesting insights into members of the arenavirus family—and how to stop them.

For the study, researchers in Saphire’s lab used a method called X-ray crystallography to build three-dimensional models of the viral machinery, called the surface glycoprotein, which LCMV uses to fuse with host cells. Building the models required the scientists to screen hundreds of crystals until they found one that was stable enough to yield the necessary data. When the team finally solved the structure, it showed that the surface glycoprotein is made up of a two-part “dimer.” The dimer is made of two identical complexes that point opposite directions—“It’s like a yin and yang,” said Saphire.

Two protein subunits make up each complex. One subunit, termed GP1, attaches onto the cell to be infected. The other subunit, called GP2, serves as the infection machinery, launching the process by which the virus fuses into the cell and hijacks it for its own purposes.

The researchers compared each complex to an ice cream cone: GP1 forms the scoop of ice cream and GP2 forms a cone that cradles the scoop. Then there’s a long drip (the N-terminal strand of GP1) running down the side of the cone.

“This structure is extremely important scientifically because it’s the first pre-fusion structure for any arenavirus glycoprotein,” said TSRI Senior Research Associate Kathryn Hastie, who was co-first author of the study with Sébastien Igonet, formerly of TSRI, now at CALIXAR.

The new view of the virus came with some big surprises. For one thing, the dimer suggested that LCMV’s structure is a sort of “missing link” between two classes of viruses.

“It has moving parts,” explained Saphire. She added that LCMV now looks like it sits between class I and class II viruses, making this structure a possible “fossil” of an intermediate evolutionary process.

In work spearheaded by TSRI biologist Brian Sullivan, the researchers studied how LCMV assembles and interacts with cells. By adding individual mutations to the genes for LCMV’s surface glycoprotein, the researchers identified five protein “residues” necessary for the virus to bind to host cells.

These experiments also showed that, although the dimer is just a stage in the LCMV life cycle, it is a particularly critical stage. Disruption of the dimeric structure prevents viral growth.

What This Means for Lassa Virus

The researchers said these findings shed light on how this viral machine moves and rotates during infection, an action that could be blocked by drugs and antibodies.

The new study also raises questions as to the degree of similarity between Lassa and LCMV. Could the dimer structure be particular to LCMV or is it a shared feature?

“That information, and the fold of the GP1-GP2 complex will be critical in the design of antibody cocktails for the treatment of Lassa fever,” said Hastie.

In addition to Saphire, Oldstone, Hastie, Igonet and Sullivan, authors of the study “Crystal structure of the prefusion surface glycoprotein of the prototypic arenavirus LCMV,” were Michelle A. Zandonatti of TSRI; James E. Robinson and Robert F. Garry of Tulane University; Pierre Legrand of SOLEIL Synchrotron Facility and Félix A. Rey of The Pasteur Institute.

The study was supported by the National Institutes of Health (grants 1U19AI109762, R21 AI116112, AI009484 and A1099699) and an Investigators in Pathogenesis of Infectious Diseases award from the Burroughs Wellcome Fund.