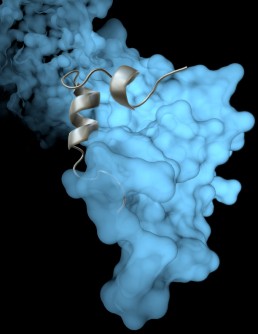 Newswise — LA JOLLA, CA – June 25, 2015 – A new study led by scientists at The Scripps Research Institute (TSRI) reveals a key part of the Ebola virus life cycle at a higher resolution than ever before. The research sheds light on how Ebola virus assembles—and how researchers might stop the often-fatal infection.

“This higher resolution is critical for design of much-needed antiviral therapeutics,” said Erica Ollmann Saphire, senior author of the new study, professor at TSRI and director of the Viral Hemorrhagic Fever Immunotherapeutic Consortium. “These structures provide the blueprints that we need to see key vulnerabilities to attack.”

The new study, published online ahead of print today in the journal Cell Reports, builds on previous work in Saphire’s lab showing that a viral protein called VP35 has a role in protecting both Ebola virus and its “cousin,” the deadly Marburg virus, from the immune system. VP35 helps (“chaperones”) a viral protein, helping it coil and form a protein shell (nucleocapsid) around the virus’s genetic material. With a virus’s genetic material blocked from view, the human immune system cannot mount an effective defense.

Until now, scientists had not been able to see the coiling process in great detail. But using an imaging technique called x-ray crystallography, Saphire and her colleagues were able to show exactly how VP35 helps the viral protein that creates the capsid.

The new structure also reveals how the VP35 protein prevents the nucleocapsid from assembling incorrectly. The researchers could even see key atoms and structures called side chains—crucial pieces for moving forward with structure-based drug design.

The researchers believe these findings could be significant for more than just Ebola virus. “The structure we revealed is likely conserved across all the filoviruses: Marburg, Sudan, Bundibugyo, Reston and Ebola,” said Saphire.

TSRI Research Associate Robert Kirchdoerfer, first author of the new study, added that the new understanding of viral assembly could be applied to Mononegavirales, an order of viruses that includes measles and rabies.

In addition to Saphire and Kirchdoerfer, authors of “Assembly of the Ebola virus nucleoprotein from a chaperoned VP35 complex” were Dafna M. Abelson and Malcolm R. Wood of TSRI and Sheng Li of the University of California, San Diego.

This study was supported by the Skaggs Institute of Chemical Biology, the Burroughs Wellcome Fund, the National Institutes of Health (NIH) (1R56 AI118016-01 and 5T32 AI007354-25), the NIH National Cancer Institute (ACB-12002) and NIH National Institute of General Medical Sciences (AGM-12006). This research used resources of the Advanced Photon Source, a U.S. Department of Energy (DOE) Office of Science User Facility operated for the DOE Office of Science by Argonne National Laboratory under Contract No. DE-AC02-06CH11357.