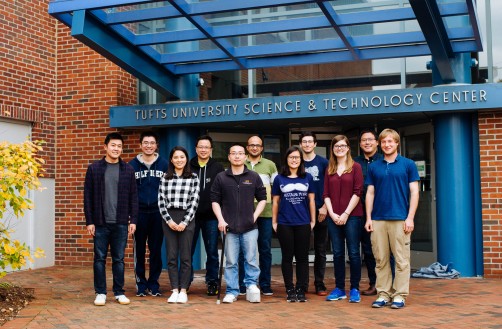 Newswise — MEDFORD/SOMERVILLE, Mass. (Nov. 28, 2017) – Xiaocheng Jiang, assistant professor of biomedical engineering in the School of Engineering at Tufts University, has been awarded an early-career award from the Air Force Office of Scientific Research (AFOSR) for his work developing graphene-based microfluidics for ultra-high-resolution, dynamic bio-imaging.

Jiang will take advantage of the unique properties of graphene, a single-layer of closely-packed carbon atoms, to build a carbon-based microfluidic platform. The platform could enable the observation and tracking of molecular and cellular processes using atomic-resolution electron microscopic methods that traditionally have been incompatible with inspecting living biological specimens.

"This is a high-risk but potentially very high-reward direction. The new platform has the potential to transform the way that biologists study biomolecules and cells," says Jiang. "This award from AFOSR makes that innovation and development possible."

According to Jiang, observing and analyzing cell dynamics at this level may provide new insights about many biologically significant processes, such as bioelectrical signaling, cancer metastasis and intracellular drug delivery, which are difficult to achieve with traditional microscopic methods.

Jiang's research in this area is also supported through the Tufts' undergraduate research program with the work of sophomore biomedical engineering student Lydia Vignale. Vignale has been actively contributing to the research project, including idea formulation and proof-of-concept experiments, since 2016.

The Jiang Lab at Tufts is interested in exploring the unique physical and chemical interactions between living and artificial systems. Its main goals are to develop minimally-invasive engineering platforms to probe, interrogate and direct biological processes, and to pursue bio-derived materials and bio-inspired approaches for a broad spectrum of engineering applications ranging from biomedical sensing to energy harvest and storage.

Prior to joining the Tufts faculty in 2015, Jiang was an American Cancer Society postdoctoral fellow at Harvard Medical School and Massachusetts General Hospital. He was awarded a 2017 Faculty Early Career Development (CAREER) Award from the National Science Foundation (NSF) earlier this year.

The AFOSR announced this year it will award more than $19.1 million in Young Investigator Research Program grants to 43 scientists and engineers. According to AFOSR, the selection committee received 285 proposals in response to the office's broad agency announcement in major areas of interest to the Air Force. These areas of interest include: aerospace materials for extreme environments, aerothermodynamics, biophysics, computational mathematics, organic materials chemistry and space power and propulsion.