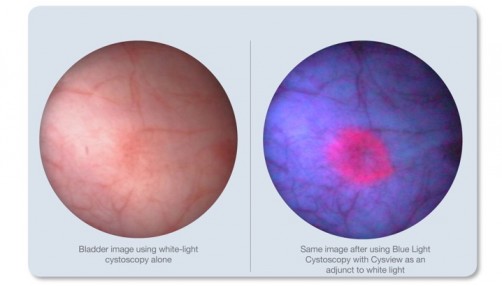 UAB is using a new technology, called Blue Light Cystoscopy with Cysview, as the standard of care to better diagnosis bladder cancer.

Newswise — BIRMINGHAM, Ala. – The University of Alabama at Birmingham is one of a few medical centers nationwide offering blue light cystoscopy. Urologists are using the optical imaging agent known as Cysview, or hexaminolevulinate hydrochloride, for the detection of papillary cancer of the bladder in patients with known or suspected bladder cancer.

“Bladder cancer is difficult to detect and has a high rate of recurrence,” said Jeffrey Nix, M.D., assistant professor in the UAB Department of Urology. “An inaccurate diagnosis can result in incomplete treatment, which may lead to serious complications and a lower chance of survival for patients with potentially aggressive tumors. The advances in this diagnostic technology enable more accurate diagnosis of bladder tumors compared to the standard technique.”

The optical imaging agent Cysview is the only imaging agent approved by the FDA for photodynamic blue-light cystoscopy performed with the KARL STORZ Photodynamic Diagnostic System. The system works by exploiting fluorescent properties of naturally occurring molecules in malignant tissues.

“Over the last two years, UAB has introduced the use of Cysview instillations and blue-light cystoscopy in the operating rooms to aid in detection of otherwise hidden areas of bladder cancer,” said Soroush Rais-Bahrami, M.D., assistant professor in the UAB Department of Urology. “It is now routinely used for primary tumor biopsy and resection procedures, and the majority of repeat resections performed by urologic oncologists at UAB. In many cases, it has helped us to identify small secondary areas of cancer inside the bladder that may have been overlooked and considered a recurrence on surveillance in the future.”

In blue-light cystoscopy, the imaging agent is delivered into the bladder about an hour prior to the cystoscopy and is absorbed by cancerous tissue. Using the special PDD system, the doctor inserts a long thin tube into the bladder. After first using white light, the doctor will switch to blue-light mode. Because of the preferential uptake of the optical imaging agent by malignant cells, other hard-to-see tumors that may be present become more visible, standing out against normal bladder tissue and making it easier for the doctor to identify and remove them. Blue-light cystoscopy with Cysview is the recommended imaging agent for identifying bladder cancer, per 2016 American Urological Association and Society of Urologic Oncology guidelines.

“Making the blue-light cystoscopy an option for our patients keeps with our commitment to advancing patient care,” Nix said. “At UAB, patients with known or suspected bladder cancer can now undergo diagnostic procedures administered by physicians who have been specially trained in the use of this innovative technology.”

Studies show that bladder cancer carries the highest lifetime treatment costs per patient of all cancers, with 40 percent of the costs coming from surgical interventions to treat cancer recurrence. These surgical interventions to remove cancerous tissue are called a transurethral resection of the bladder tumor, or TURBT. Based on a combination of clinical data and economic analyses, a study showed that the five-year cost for patients who initially receive blue-light cystoscopy as part of their TURBT were lower than for those patients who initially received white-light TURBT.

White-light cystoscopy has been the gold standard for visualizing suspicious lesions during TURBT. However, when used on its own, harder-to-see tumors can often be missed.

Known for its innovative and interdisciplinary approach to education at both the graduate and undergraduate levels, the University of Alabama at Birmingham is the state of Alabama’s largest employer and an internationally renowned research university and academic medical center; its professional schools and specialty patient-care programs are consistently ranked among the nation’s top 50. UAB’s Center for Clinical and Translational Science is advancing innovative discoveries for better health as a two-time recipient of the prestigious Center for Translational Science Award. Find more information at www.uab.edu and www.uabmedicine.org.