7-Feb-2018 9:05 AM EST, by University of Alabama at Birmingham
favorite_border 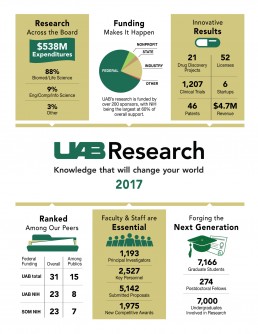 The University of Alabama at Birmingham had $538 million in research expenditures in 2016, and ranked No. 15 nationally among public universities and No. 31 overall in federally funded research in 2016. 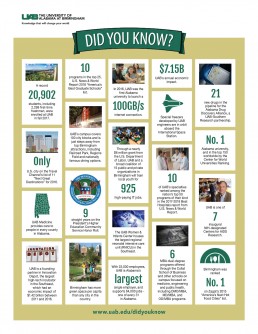 Here is a look at UAB's research efforts, by the numbers.

Newswise — BIRMINGHAM, Ala. – The University of Alabama at Birmingham had $538 million in research expenditures in 2016, and ranked No. 15 nationally among public universities and No. 31 overall in federally funded research in 2016, according to data released by the National Science Foundation.

“Competition has never been more fierce for research funding, so our increases in funding truly underscore the importance of the work being done here,” said UAB President Ray L. Watts. “UAB will continue to aggressively recruit and support the students, faculty and staff who conduct the transformational work that ensures we stay at the forefront of discovery, making a difference in lives around the world.”

UAB now ranks sixth among Southeastern universities in federal research expenditures, behind only North Carolina (8), Duke (10), Georgia Tech (11), Vanderbilt (24) and Emory (27). As a state, Alabama received $281.5 million in NIH funding in fiscal year 2016, which makes UAB responsible for more than 85 percent of the state’s NIH-funding dollars.

UAB researchers have contributed breakthrough scientific research throughout its 49-year history, and this recent year is no different.

From advancements on the cutting edge of precision medicine research to showing how plants sense the world and securing data sent via voice over internet, to new research showing how a component of neurons may protect against Alzheimer’s disease, UAB continues to produce game-changing scientific breakthroughs throughout its diverse research portfolio.

The Blue Ridge Institute for Medical Research also reports that UAB’s National Institutes of Health funding reached $238 million in fiscal year 2016, including $186 million to the School of Medicine. That number is expected to top $195 million in School of Medicine funding in 2017, as the school also exceeded 300 principal investigators for the first time in two decades.

“UAB is Alabama’s largest single employer, with more than 23,000 employees and an economic impact exceeding $7.15 billion a year; but we have no greater impact than when our innovations improve and save lives,” said Christopher S. Brown, Ph.D., vice president for Research. “We have the right people and priorities to maintain the momentum we have built to ensure we are among the world’s leading comprehensive research universities, and these new data further affirms our efforts.” 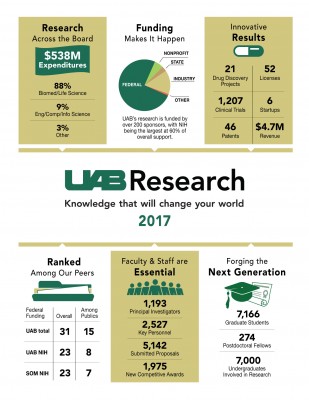 Caption: The University of Alabama at Birmingham had $538 million in research expenditures in 2016, and ranked No. 15 nationally among public universities and No. 31 overall in federally funded research in 2016. 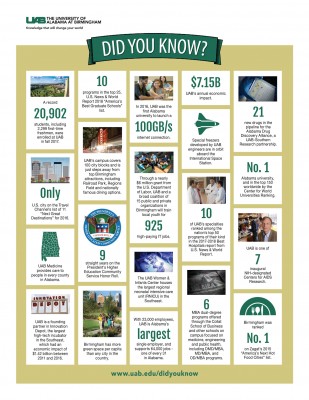 Caption: Here is a look at UAB's research efforts, by the numbers.