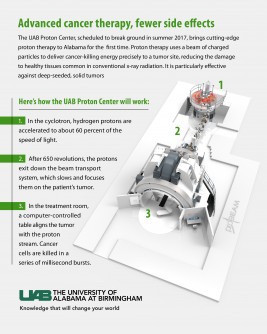 Newswise — BIRMINGHAM, Ala. – The University of Alabama at Birmingham will partner with Proton International to bring proton therapy, one of the most technically advanced forms of cancer-killing radiation, to Alabama. Proton therapy delivers a more precise dose of radiation to a tumor and can avoid damage to healthy surrounding tissue better than conventional X-ray radiation.

“This is a significant step forward in cancer treatment for residents of Alabama and surrounding areas,” said Will Ferniany, Ph.D., CEO of the UAB Health System. “Proton therapy is an extremely advanced cancer-fighting radiation technology. Coupled with the skill, experience and resources of the UAB Comprehensive Cancer Center, the UAB Proton Therapy Center will be a life-changing resource for thousands of cancer patients throughout our region.”

Proton International, one of the world’s leading developers of proton radiation facilities, will build the UAB Proton Center on the current site of parking lot 55, at 20th Street and Fifth Avenue. UAB physicians and staff will operate the center.

“Proton therapy will allow us to treat deep-seeded cancers and minimize the radiation dose delivered to surrounding normal structures,” said James A. Bonner, M.D., the Merle M. Salter Endowed Professor, Chairman of the UAB School of Medicine Department of Radiation Oncology and president of the University of Alabama Health Services Foundation. “This will be the first proton therapy center in Alabama, and we are excited to offer this cutting-edge approach for patients and families in Birmingham, across Alabama and beyond.”

There are 25 active proton therapy centers in the United States, most affiliated with major cancer centers. The roughly $50 million project has been approved by an administrative law judge appointed by the Alabama State Health Planning and Development Agency. Groundbreaking is expected in the summer of 2017, and construction and testing will take about two years before the building is clinically operational.

“Proton therapy is already having a tremendous impact on the health of people around the world,” said Chris Chandler, CEO of Proton International. “Experts conservatively estimate that about 250,000 cancer patients in the United States alone could benefit from proton therapy. We are excited to partner with UAB and put this outstanding tool into the hands of the best oncologists in Alabama.”

Proton therapy uses an aimed beam of protons directed at the tumor site. The beam is configured to deliver the majority of its energy precisely at the tumor location. Healthy tissue in front of the tumor receives a minimal amount of energy, and tissue behind the tumor receives very little. This reduces the damage to healthy tissue that is common in the use of conventional X-ray radiation and is the cause of most side effects.

“Recent advances in imaging have made proton therapy much more viable,” said John Fiveash, M.D., professor in the UAB Department of Radiation Oncology. “It uses sophisticated imaging to create a 3-D image of the tumor. It then delivers a focused beam of radiation, custom-sized and -shaped, so that it paints the tumor site while leaving surrounding tissue generally untouched, reducing collateral damage.”

Proton therapy is appropriate for many solid cancer tumors, including tumors of the brain and central nervous system, eye, gastrointestinal tract, head and neck, liver, lung, prostate, spine, and some breast tumors. It can be very efficacious for single-site tumors. In some cases, proton therapy may be useful in treating cancer that has metastasized, or spread into surrounding tissue, due to its focused dose advantages.

“Proton therapy is particularly beneficial for children, as they are especially vulnerable to damage from radiation,” said Alyssa Reddy, M.D., professor of hematology/oncology in the UAB Department of Pediatrics. “Conventional radiation can help cure a child’s cancer, but it carries an increased risk of damage to surrounding tissue. In children, tissue damage, particularly in still-developing organs such as the brain, can leave the child susceptible to myriad health issues that may not emerge for years. Proton therapy offers the opportunity to successfully treat pediatric tumors and minimize the risk for side effects later in life. This will improve the health and quality of life of pediatric cancer survivors, most of whom we expect to live long and productive lives.”

The UAB Proton Center will consist of a three-story building to house the proton therapy system, manufactured by Varian Medical Systems, a longtime partner with UAB in the delivery of radiation therapy. UAB will lease the property to Proton International, which will build and own the facility. Planning and pre-treatment will continue to be done at UAB’s Hazelrig-Salter Radiation Oncology Center. The medical staff, including radiation oncologists, cancer physicians, medical physicists, dosimetrists, radiation therapy technologists and nurses, will be exclusively from UAB.

UAB will also be involved in clinical research studies on the use of proton therapy, to discover the full utility of the therapy and produce best practice parameters on its use.

The ability to make protons a cancer-fighting tool starts with speed.

The protons must first accelerate to about 60 percent of the speed of light, or around 114,000 miles per second. Only then can the stream of protons be tuned and focused on its target — a human tumor.

The science behind this proton therapy has two elements. What happens when bursts of those high-speed protons enter the body of a patient? And how can you make them go so fast?

Cell deathProtons are tiny, subatomic particles found in the nucleus of every atom. They have a positive charge, which is key to both their impact in a patient and how they can be accelerated.

Inside cells of the body, the proton wants to strip electrons — the negatively charged subatomic particles — from molecules. When this happens, particularly to DNA in a tumor cell, it damages the genetic material enough to cause cell death. Kill enough cells in a tumor, and the tumor is destroyed.

The moving protons have an odd characteristic with regard to this damage — they do most of their electron stripping just before they stop. Thus, as protons speed through healthy tissue toward a tumor, they cause less damage in that healthy tissue than cancer radiotherapy using traditional X-rays.

By varying the speed of the protons, radiation oncologists can vary how deeply the protons will travel into the body before they stop. Through fine control of speed and aiming, they can target bursts of proton ionizing energy to every point inside the volume of a tumor. As the protons reach the depth of the tumor and begin to stop, they cause the most damage. Unlike X-rays, there is no damage to healthy tissue beyond the tumor.

90-ton machineThe machine that will accelerate protons for the UAB Proton Center is called a cyclotron. The planned cyclotron will weigh 90 tons, with a superconducting magnet cooled by liquid helium to a temperature of about minus 452 degrees F.

Protons from hydrogen gas are injected at the center of the cyclotron. Because these moving protons have a positive charge, the magnetic field from the superconducting magnet will bend their travel into a circular path. At every half circle inside the cyclotron, the protons experience a brief electrical field that accelerates them, much like a child’s pumping a swing to make it go higher. As the protons travel faster and faster in the magnetic field, their circular path widens.

The result is a spiral that expands with each swing the protons make around the cyclotron. After 650 revolutions, the protons will reach 60 percent of the speed of light while moving in a 5-foot-3-inch-diameter path. At that point, they exit the cyclotron and speed through an energy selection system and beam transport system, headed toward a cancer patient.

‘Painting’ a tumorThese two systems are a crucial step between the cyclotron and the patient. In this long tube, the protons are focused and slowed to the exact speeds needed to penetrate to the proper depths for each spot of the tumor. The fastest protons will be able to penetrate nearly 12 inches into the body. At the far end of the beam transport, the patient lies on a robotic patient-positioning table in the 16-foot-wide treatment room.

The cyclotron, energy selection system, beam transport system and treatment room will stand on a footprint the size of a tennis court, part of a new three-story-tall building to be built near 20th Street and Fifth Avenue South. When it starts operation in about two years, the UAB Proton Center will be able to “paint” the entire volume of a tumor with brief bursts of protons, spot by spot, layer by layer. A typical spot may get hit with a three-one-thousandths-of-a-second burst that contains 75 million protons. The patient will feel nothing during treatment.

The Varian ProBeam Proton Therapy System for intensity-modulated therapy will be manufactured by Varian Medical Systems, a pioneering developer of new tools for fighting cancer. When it becomes operational, the new Varian proton therapy system will seamlessly integrate with UAB’s existing Varian software and technology.

Boiler:About UABKnown for its innovative and interdisciplinary approach to education at both the graduate and undergraduate levels, the University of Alabama at Birmingham (UAB) is the state of Alabama’s largest employer and an internationally renowned research university and academic health center; its professional schools and specialty patient-care programs are consistently ranked among the nation’s top 50. Find more information at www.uab.edu and www.uabmedicine.org.