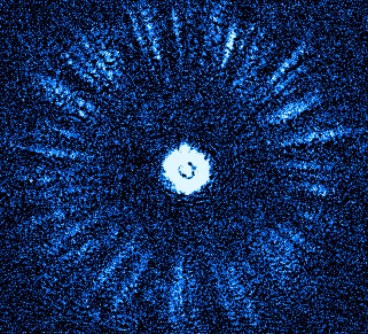 Jets radiate out of a Bose-Einstein condensate in a firework-like display.

Newswise — Scientists aren’t normally treated to fireworks when they discover something about the universe. But a team of University of Chicago researchers found a show waiting for them at the atomic level—along with a new form of quantum behavior.

“This is a very fundamental behavior that we have never been seen before; it was a great surprise to us,” said study author and professor of physics Cheng Chin. Published Nov. 6 in Nature, the research details a curious phenomenon—seen in what was thought to be a well-understood system—that may someday be useful in quantum technology applications.

Chin’s lab studies what happens to particles called bosons in a special state called a Bose-Einstein condensate. When cooled down to temperatures near absolute zero, bosons will all condense into the same quantum state. Researchers applied a magnetic field, jostling the atoms, and they began to collide—sending some flying out of the condensate. But rather than a uniform field of random ejections, they saw bright jets of atoms shooting together from the rim of the disk, like miniature fireworks.

“If you’d asked almost anyone to predict what would happen, they would have said that these collisions would just send atoms flying off in random directions,” said postdoctoral fellow Logan Clark, the first author of the study; he and co-author and postdoctoral fellow Anita Gaj were the first to see the phenomenon. “But what we see instead are thousands of bosons bunching together to leave in the same direction.”

“It’s like people forming a consensus and leaving in groups,” Chin said.

The tiny jets may show up in other systems, researchers said—and understanding them may help shed light on the underlying physics of other quantum systems.

Moreover, the jets, like other new quantum behaviors, may be of interest in technology. “For example, if you sent a particular atom in one direction, then a bunch more would follow in that same direction, which would help you amplify small signals in the microscopic world,” Clark said.

Since there’s energy delivered to the system and the particles are not at their ground states, it falls under the category of a particularly hot area of quantum engineering research called “driven” quantum systems, the authors said. The physics of systems in these quantum states is not well understood, but essential for engineering useful technologies.

However, Bose-Einstein condensates are a generally well-studied area, so they were excited to see a never-before-documented behavior, the scientists said.

“If you see something crazy in this simple experiment, it makes you wonder what else is out there,” said graduate student Lei Feng, also a co-author.