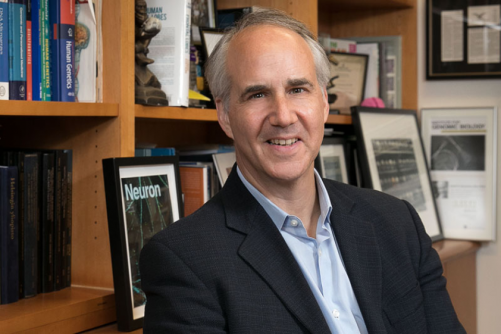 Newswise — Dr. Daniel Geschwind, the Gordon and Virginia MacDonald Distinguished Professor of Human Genetics, Neurology and Psychiatry at UCLA, was awarded the National Academy of Medicine’s (NAM) 2022 Rhoda and Bernard Sarnat International Prize in Mental Health in recognition of his pioneering research and leadership in autism genetics.

The Sarnat Prize, which includes a medal and a $20,000 prize, is NAM’s highest honor related to the brain and mental health. Geschwind, who was elected to the elite panel in 2011, will receive the award at NAM’s annual meeting on Oct. 16.

In its award announcement, NAM credited Geschwind with shaping the modern era of research in autism genetics by helping to create and lead the Autism Genetic Resource Exchange (AGRE) with the Cure Autism Now foundation, the first open-access resource for research on autism spectrum disorder (ASD) that was relied on by scientists around the world. The repository of clinical and genetic information, founded in 1997, has led to discoveries in autism genetics, including the role of rare mutations and inherited variation, and created a model for how scientists can work collaboratively to accelerate research in psychiatric genetics.

The NAM award also recognizes Geschwind, the director of the UCLA Center for Autism Research and Treatment, for his laboratory’s highly influential research that has shaped our understanding of autism. His work has focused on translating genetic findings to biological understanding broadly across brain disorders. In ASD, this includes his formulation of the disorder as a developmental disconnection syndrome. He pioneered the study of language and social endophenotypes in genetic studies and demonstrated how transcriptomic and epigenetic profiling could be used to define the molecular pathology in ASD brain and other neuropsychiatric disorders. These latter studies have provided a roadmap for understanding the pathophysiology of neuropsychiatric disorders more broadly. Geschwind over the last decade has also sought to boost inclusion of underrepresented groups in autism research, which includes leading the only study of autism genetics in African Americans.

“Dr. Geschwind’s pioneering work has shown how research can help us meet the challenge of neurologic and psychiatric disorders by identifying how they may be genetically driven, and his creation of AGRE demonstrated the power of community resources to expand these important research efforts,” said National Academy of Medicine President Victor J. Dzau. “His transformational work — including his efforts to make research on ASD more inclusive — makes him highly deserving of this recognition.”

“This award is a testament to the environment at UCLA that has supported my laboratory’s efforts all of these years and the students and post-docs that have been involved in driving this work forward,” Geschwind said.

The Sarnat Prize, awarded annually since 1992, recognizes individuals or groups that have demonstrated outstanding achievement in improving mental health. The most recent recipient from UCLA was Dr. Kenneth Wells, a professor of psychiatry and biobehavioral sciences at the David Geffen School of Medicine, who in 2018 was honored for his work improving mental health in underserved communities.

The Sarnat Prize is the second major recent award for Geschwind after he received the American Academy of Neurology’s top honor for research, the Cotzias Award, in the spring.